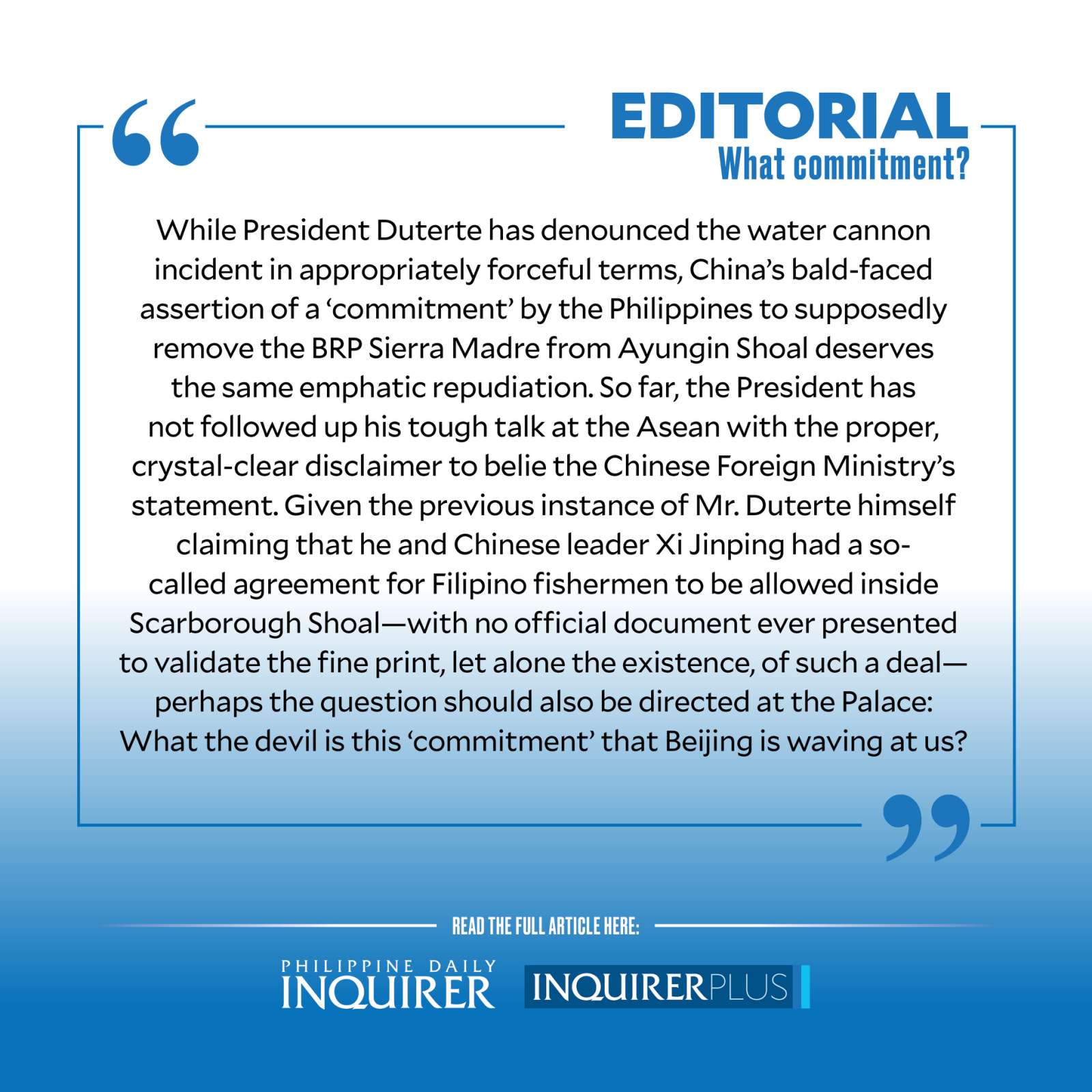 In a rare show of resolve and independence at the Nov. 22 Asean-China Special Summit, President Duterte slammed the latest Chinese bullying incident at the West Philippine Sea (WPS), which saw three Chinese coast guard vessels blocking and blasting with water cannons Philippine ships on a supply run to the Ayungin Shoal in the WPS.

“We abhor the recent event in the Ayungin Shoal and view with grave concern other similar developments,” Mr. Duterte declared. “This does not speak well of the relations between our nations and our partnership.”

Though no one was hurt in the incident, the Philippine boats had to return to mainland Palawan after one of them suffered outrigger damage from the cannon attack.

Equally abhorrent was China’s response to the Philippines’ protest. It called out the Philippine boats for “trespass(ing) into (Chinese waters) without (its) consent. Chinese coast guard vessels performed official duties in accordance with international law and upheld China’s territorial sovereignty and maritime order,” China’s Foreign Ministry spokesperson Zhao Lijian said in a briefing on Nov. 18.

In accordance with international law? Territorial sovereignty? Zhao’s words are an indication of how China continues to defy the international legal consensus on the South China Sea/WPS issue laid down by the 2016 Arbitral Award that favored the Philippines and denied Beijing’s claims over the area.

Aside from aiming water cannons at Philippine supply vessels and harassing Filipino fishermen, Chinese vessels have also chased Filipino researchers from the University of the Philippines Marine Science Institute during their research expeditions in the WPS, according to microbial oceanographer Deo Onda.

“They don’t directly run over us or directly hit us but we know that they follow us every day. What we do is we just keep our distance from them,” Onda said. The Chinese Coast Guard would also warn them “to leave Chinese territory,” and would shadow their research vessel Panata until the bigger Chinese boats could no longer follow in shallower waters.

Even more ominously, warned Onda, China has been conducting “illegal” research in the WPS and publishing data without disclosing that such studies were done in Philippine waters. “It institutionalizes … and strengthens their claim of the area,” the UP scientist stressed, adding that China has established three research stations in the WPS and sends hundreds of research vessels into the area.

To counter this particular form of encroachment, the country’s educational institutions must “do a strong pushback” by sending more research teams to the WPS to assert Philippine sovereignty, proposed House Deputy Minority Leader Carlos Isagani Zarate. The Philippine government, he said, should support more activities in the area—“from the study of marine life, oil and natural gas deposits, as well as protecting the environment”—and the Philippine Coast Guard can escort Filipino scientists conducting their research in Philippine territorial waters.

China’s latest statement reveals the objective of its intimidation drive: “China demands that the Philippine side honor its commitment and remove its illegally grounded vessel from Ren’ai Jiao,” Zhao said last week at a press briefing in Beijing, referring to Ayungin shoal and the BRP Sierra Madre. The World War II-era Navy ship was purposely grounded at the shoal in 1999 to serve as an outpost for Filipino troops and to stake the country’s claim over the shoal. “Ren’ai Jiao is part of China’s Nansha Qundao … This position remains unchanged,” Zhao added.

What commitment? Who made such a commitment, when was it made, and where is the signed document for it?

Philippine officials expressed bafflement at the claim. “As far as I know there is no such commitment,” said Defense Secretary Delfin Lorenzana. “That ship has been there since 1999. If there was commitment, it would have been removed long time ago.” China’s claim, Lorenzana declared, “is without basis.”

While Mr. Duterte has denounced the water cannon incident in appropriately forceful terms, China’s bald-faced assertion of a “commitment” by the Philippines to supposedly remove the BRP Sierra Madre from Ayungin deserves the same emphatic repudiation. So far, the President has not followed up his tough talk at the Asean with the proper, crystal-clear disclaimer to belie the Chinese Foreign Ministry’s statement. Given the previous instance of Mr. Duterte himself claiming that he and Chinese leader Xi Jinping had a so-called agreement for Filipino fishermen to be allowed inside Scarborough Shoal—with no official document ever presented to validate the fine print, let alone the existence, of such a deal—perhaps the question about Zhao’s words should also be directed at the Palace: What the devil is this “commitment” that Beijing is waving at us?