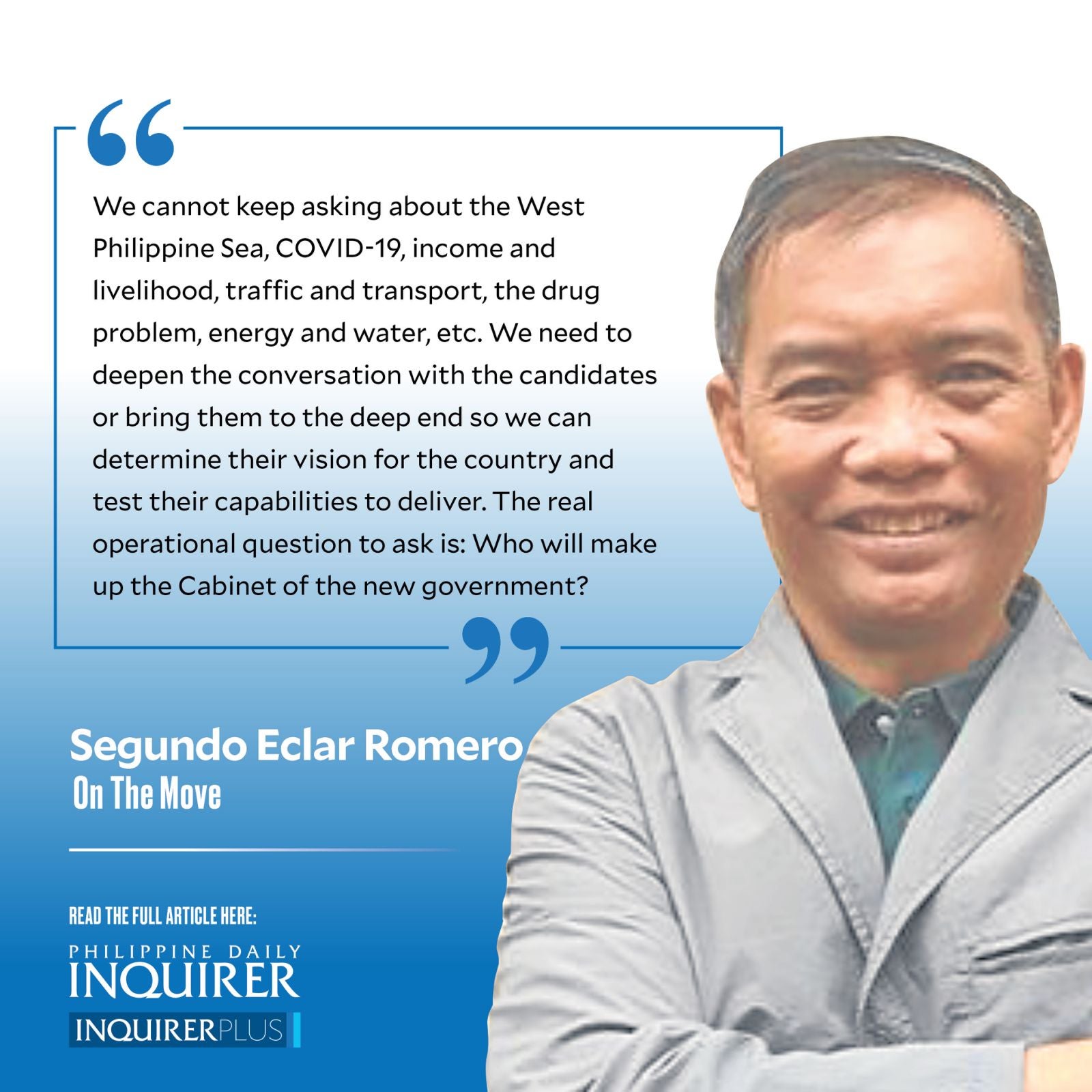 We cannot keep asking about the West Philippine Sea, COVID-19, income and livelihood, traffic and transport, the drug problem, energy and water, etc. We need to deepen the conversation with the candidates or bring them to the deep end so we can determine their vision for the country and test their capabilities to deliver.

The real operational question to ask is: Who will make up the Cabinet of the new government? Wouldn’t it tell the electorate much more about a putative new administration if we knew who would be the secretaries of foreign affairs, justice, education, health, agriculture, environment and natural resources, labor? When President Duterte won the elections, we thought there would be a systematic effort to vet the incoming members of the Cabinet. Sen. Pia Cayetano was just laying out the process when President Duterte started appointing his elementary and college classmates to top government positions. We could have avoided that letdown if we demanded more critical answers during the electoral campaign.

Just identifying the long or short list of the pool of nominees being considered for each of the key Cabinet offices would already give so much more meaningful information than the repeated sound bites that follow topics thrown at the candidates. It will take some preparation and courage to provide this kind of information, but from the point of view of the voters, it would help define and differentiate the candidates. Imagine if candidates Lacson, Moreno, Marcos, Pacquiao, Robredo, and De Guzman would oblige us with this information.

If we were to pursue this further, consider this: An idea of how the platform of government that is being sketched for the electorate and the public by each of the standard-bearers is accompanied by a rough breakdown of how the P25 trillion or so budget over the period 2022-2028 will be spent for national problem-solving as well as for inclusive development.

Being president is a serious business. One is not expected to keep everything in his or her head, but certainly he or she should be able to generate the information required through his or her staff, or the 1.5 million-strong bureaucracy. An intimidating set of topics that national candidates may be confronted with involves the list of 63 standing committees of the House of Representatives and their mandates. They do not have to be able to answer these questions themselves, but they should be able to put together their platform, program, and policy teams to work on these. At the very least, they should work with the 17 Sustainable Development Goals or the 39 standing committees of the Senate.

This is the information that must be demanded by the electorate of the presidential candidates. Already, the differentiation is turning on who is spending more in mass and social media, or who is organizing networks of microinfluencers more effectively. This is not what the election ought to be about. It is about enabling the people to judge the political outcomes that the candidates can produce over the six years.

If the results of the elections will not turn on the right answers to the right questions, we might as well just rely on bellwethers to predict our elections. A bellwether is a region that uncannily serves to “predict” how a nation would vote based on past voting patterns. Wikipedia tells us that in the Philippines, the winner of the presidential elections has won in Negros Oriental in all instances since 1935 except for 1961 and 2016, and in Basilan since its creation in December 1973 and its first election in 1981. After Negros Oriental, Agusan del Norte and Lanao del Sur have the longest active streaks. Their provincial winners were the elected president since the 1969 election. As for vice presidents, Pangasinan has voted for the winner in all elections save for 1986 and 2016.