Of mandates and strategies 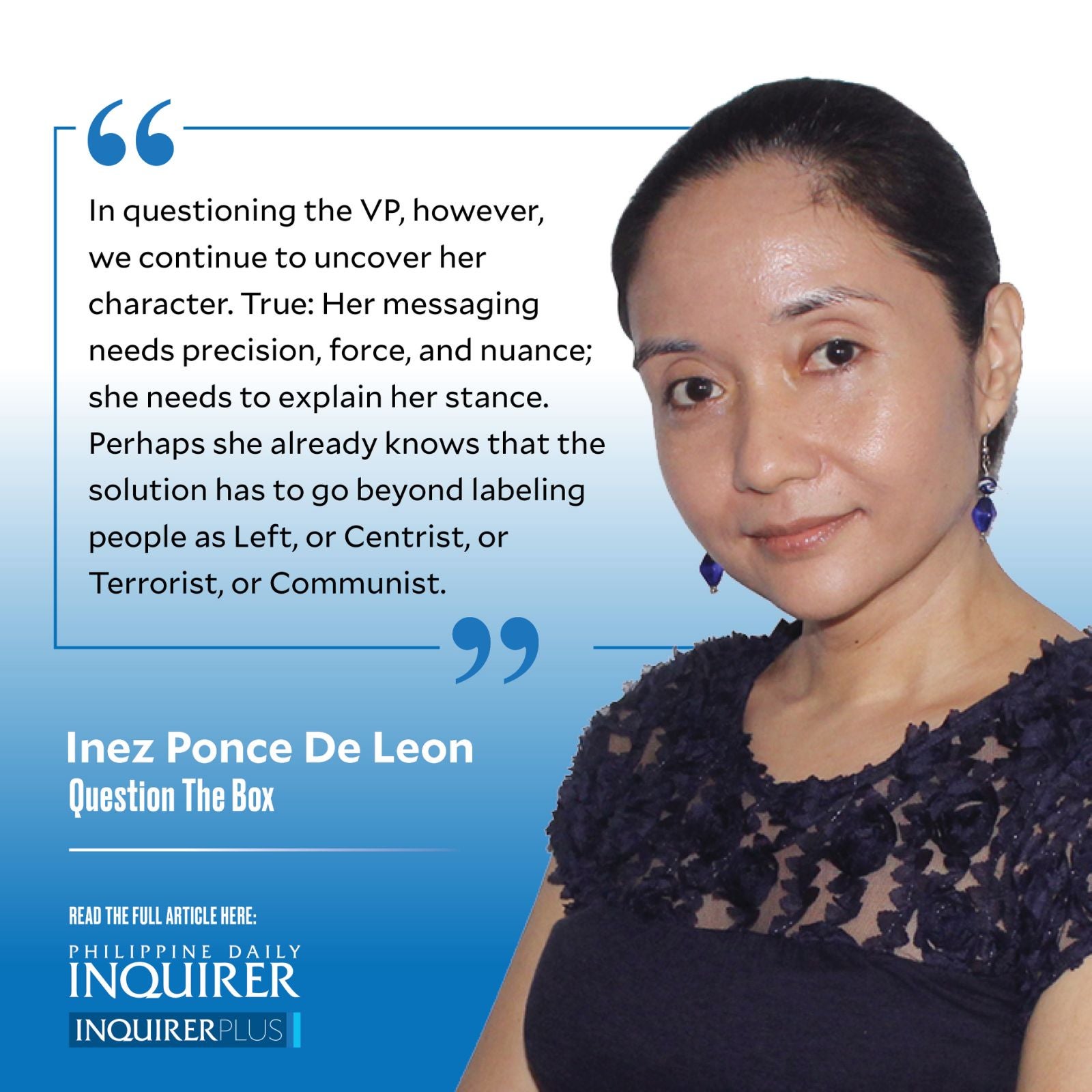 Last week, VP Leni Robredo met with officers of the armed forces for a security briefing, as she has always done on schedule ever since she assumed her post. This time, however, she brought up what she called the elephant in the room: the National Task Force to End Local Communist Armed Conflict (NTF-Elcac), a group created during the Duterte presidency with the aim of ending the insurgency problem. The NTF-Elcac has been visible largely because of its Red-tagging and “matrix”-drawing work, but more so because this work has often ended in violence and death.

Robredo already talked about abolishing the NTF-Elcac in previous interviews. At the security briefing, however, she spoke about supporting the group’s mandate. It was the careless Red-tagging, she claimed, that had cast the task force in a bad light.

Netizens were quick to debate on the issue. Some invited the VP to talk to those who had lost family members because of the task force’s bloody weekends. Others defended her and claimed that she was trying to find common ground with the armed forces. Others are asking for clarification on what exactly Robredo is advocating for.

Can the task force be divorced from the people that run it and the government that conceived it? Can we reduce the NTF-Elcac problem to “good mandate, bad people”?

To reduce the problem to component parts would be a contradiction for Robredo. In that same briefing, she praised the Barangay Development Fund, which the NTF-Elcac supposedly uses to develop communities so that people spend their time earning a livelihood instead of contributing to the insurgency problem. Her aim, perhaps, was to forward a people-based rather than militaristic solution. This is consistent with the VP’s holistic approach to governance: Listen to people, acknowledge their unique contexts, cooperate on a project, get to work together.

The NTF-Elcac’s tactics, however, might be of a different breed. Even if the mandate looks good on paper, the people that execute the mandate still come from a culture of “identify, label, and eradicate the enemy” rather than “determine the root causes of the problem and help people in the long term.” The NTF-Elcac therefore, represents a government that reduces people to ideology to justify wiping them out.

Robredo already has the counter-strategy: She has worked with local communities, talked to them, listened to them, and responded to their needs. Why would she need the Barangay Development Fund, or even the NTF-Elcac, when she already has a track record in livelihood projects—and for a fraction of the funding that the NTF-Elcac gets?

Dr. Melay Abao, political scientist and a fellow faculty member at the Ateneo, likewise asks for a shift in focus: Don’t ask just Robredo about the insurgency problem; engage all the presidential candidates on their stance. They are vying for the post of Commander in Chief of the Armed Forces, and a problem of armed conflict is a problem of national security. How would the candidates work with the military in dealing with the insurgency issue? Why has the peace process failed, and how do we address these failures moving forward? What options and strategies do the candidates have to ensure that some form of negotiations can take place?

In questioning the VP, however, we continue to uncover her character. True: Her messaging needs precision, force, and nuance; she needs to explain her stance. Perhaps she already knows that the solution has to go beyond labeling people as Left, or Centrist, or Terrorist, or Communist. Maybe she truly sees that the effort of resolving armed conflict does not lie in funneling billions of pesos into a task force just for it to draw random matrices, concoct networks, attempt to connect the dots, or play paint-by-numbers. But she is trying to be conciliatory, perhaps not to pander to those in power, but because she acknowledges that the insurgency is a thorny, wicked problem that first requires bringing different groups with disparate interests to the table.

While we wait for her clarification, let us ponder, for a moment, on this ability to question a government official without being reprimanded for being too critical. Let us ponder on the possibility that we could have a president who listens and discerns, and who brings out the debaters and thinkers in all of us.

Read Next
Libraries as autobiographies
EDITORS' PICK
On Day 2 of implementation, gov’t says workers now exempt from ‘no vax, no ride’ policy
Gear up and get ready to play with Yamaha Mio Gear
DOH: 28,471 new COVID-19 cases in PH; active cases now 284,458
Metro Manila posts lowest temperature yet this ‘amihan’ season at 19°C
Over 3 Million worth of prizes to be won at Smart Padala’s SENDali Manalo Promo!
Acer starts the year off strong with the Aspire Vero National Geographic Edition
MOST READ
In Batanes, octogenarian dies of COVID-19
Cold-case investigation names surprise suspect in Anne Frank’s betrayal
Emma Stone calls Andrew Garfield a ‘jerk’ after he ‘lied’ about his ‘Spider-Man: No Way Home’ appearance
Czech anti-vax singer dies after deliberate infection
Don't miss out on the latest news and information.