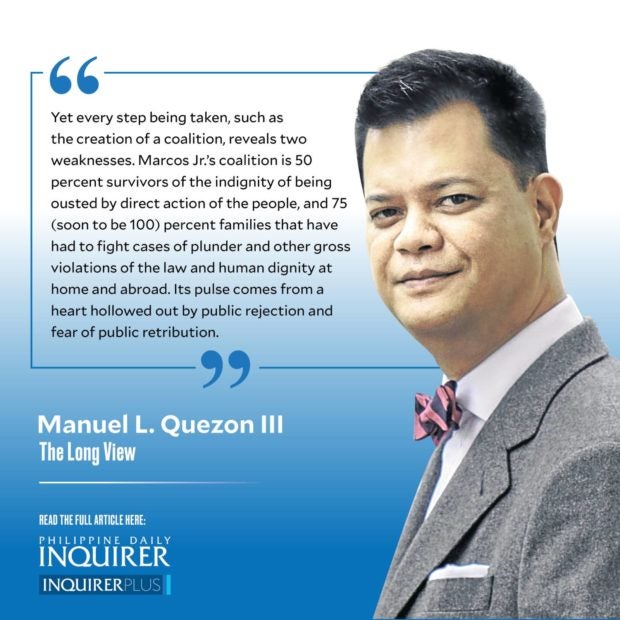 Two things happened within 24 hours of each other: a withdrawal of candidacy and a new commercial. The withdrawal, in a televised message complete with bereaved mourner-style sunglasses, was on the part of Sen. Bong Go, whose throwing in the towel further strengthens the bandwagon effect being built up by the Marcos Jr. campaign. While Isko Moreno cleverly put himself forward to replace Go as the President’s anointed, the new commercial of Ferdinand Marcos Jr., which began airing in time for the Bonifacio Day holiday, maintains the forward trajectory of his campaign.

In the ad, the candidate ditched his father’s trademark red and substituted it with a sober navy blue; it shows him cleverly turning the famous windmills of his home province into a pinwheel handed over by the candidate to various adoring representatives of different sectors, the zinger being a choir singing “Umagang Kay Ganda” in a not-so-subtle proclamation of the advent of the Only Begotten Son. I’ve heard it said that as far as retail sales are concerned, companies sell 40 percent of their products during the Christmas season. The Marcos Jr. ad is thus perfectly timed, with a flawless execution: The candidate got his money’s worth.

The holiday season thus has the merry air of the Marcos Restoration being back on track, after the President so rudely interrupted it. It seemed for a time that the initiative, the momentum, had shifted. One has to wonder if the Marcosian shift to blue from red has something to do with the color wheel and pink, but if it does, the quality of the most recent Marcos Jr. ad is in stark contrast to the commercial of the Vice President.

FEATURED STORIES
OPINION
Return to the classrooms!
OPINION
Spying on our working poor
OPINION
In voting for next president, facts should bear out perceptions

Let me put it this way: When I first encountered it, it was with my back turned as it popped up on YouTube. Listening to her touched my heart; a short while later, when I repeated it and I actually saw it and not just heard it, it broke my heart. Because if there is one thing that can be said about the Vice President, it’s that she is an optimistic and cheerful person; yet the ad showed her careworn and sad, and communicated resignation and defeatism. Considering what she is up against—five years of slander and misinformation—it is tragically sad to launch a campaign of hope with the appearance of hopelessness. What you get is what we have: Marcos Jr. taking hope for himself in the same manner he doubled down on owning the windmills of Ilocos Norte.

I believe the first instinct of the Filipino is to hop on a bandwagon; it takes special circumstances to convince the Filipino to back David in a battle with Goliath. The remarkable, measurable, jump in Marcos Jr.’s support from the 30 percent he and his sister have commanded at the polls, to 40 percent and even beyond, is made possible by the whole panoply of his candidacy designed to project it as an unstoppable thing. When others faltered, as Sara Duterte did, he scooped up their support, too, forcing her and others to play by his rules. Yet every step being taken, such as the creation of a coalition, reveals two weaknesses. His coalition is 50 percent survivors of the indignity of being ousted by direct action of the people, and 75 (soon to be 100) percent families that have had to fight cases of plunder and other gross violations of the law and human dignity at home and abroad. Its pulse comes from a heart hollowed out by public rejection and fear of public retribution.

From caravans to solidarity walks and, most meaningful of all, the sharing of lugaw while conversing on the reasons for the Vice President’s candidacy and what she represents, it is the widow’s mite in the biblical sense that is being offered up in the face of the vast resources of the combined Marcos-Arroyo-Duterte-Estrada coalition; the same folks who insisted on pink and who took to heart the concise message, “Let Leni Lead,” who remain engaged regardless of the missteps that have led to the ads no one’s noticed (“I choose you,” the ad I first heard then sadly saw), to the ones unfortunately being talked about. Because it is enough, for now, and useful, and meaningful, to simply muster the courage to take a stand and delight in others doing so, too. But now the truly hard part of convincing others conditioned to hate the Vice President, without even knowing anything about her, to give her a chance, has begun. Marcos Jr. has made up for lost time.

Read Next
Amorsolo: Acquired taste
EDITORS' PICK
Gear up and get ready to play with Yamaha Mio Gear
PH to send 584 athletes, 161 officials to Vietnam SEA Games
SSS: Members on home quarantine due to COVID-19 can apply for sickness benefit
Acer starts the year off strong with the Aspire Vero National Geographic Edition
Mobile COVID-19 vaccination for commuters, transport workers set at PITX
Kalinga, Ifugao, Mt. Province, N. Samar will be under Alert Level 4 from Jan 21-31
MOST READ
Mayor Vico counters vice mayor: ‘Did I say anything about his family?’
Imelda Marcos trends on Twitter after octogenarian jailed for allegedly stealing mangoes
Villar backs implementation of EDSA decongestion blueprint
PH 51st on list of world’s most powerful militaries
Don't miss out on the latest news and information.