The politics of Omicron

And just as the number of COVID-19 cases in our neck of the woods steadily goes down, with the OCTA Research Group noting that a 29-percent decrease in daily infections in the week Nov. 21-27 led to an average 954 cases (the lowest since July 2020), a new coronavirus variant first detected by South African scientists has compelled the World Health Organization (WHO) to warn of a “very high” global risk.

The B.1.1.529 variant named Omicron bids fair to throw a wet blanket over holiday plans all over the planet, particularly in this country that celebrates the world’s longest Christmas season. Already, many Filipinos are venturing outside their homes seemingly en masse, crowding entertainment and shopping centers for lack of parks and other outdoor spaces, and generally behaving in a manner encouraging to big and small businesses long mired in the doldrums.

Already, the government has announced — and then suspended — the opening of borders to fully vaccinated foreign travelers with visa-free privileges and from “green list” countries during the period Dec. 1-15, with looser quarantine and testing protocols to make their arrival less encumbered.

FEATURED STORIES
OPINION
Return to the classrooms!
OPINION
Omicron as ‘trangkaso’
OPINION
No debate, no win

But Omicron gives everyone pause. It also makes a fact of modern life quite clear: The coronavirus will not vanish like a bad dream anytime soon.

For one, the remarkable infection surge in parts of Europe such as Germany, Austria, the Netherlands, etc., suggests similar impending surges here and elsewhere. For another, even as the number of daily infections here has dropped (only last Sept. 11 it was 26,303, the highest single-day tally since the pandemic began), the number of deaths constantly in the hundreds is worrying (for example, 193 on Nov. 25, as opposed to most other Asean countries: 16 in Indonesia, 37 in Malaysia and Thailand, 125 in Vietnam, 8 in Myanmar, 6 in Singapore, 4 in Cambodia, 1 in Lao PDR, and 0 in Brunei). 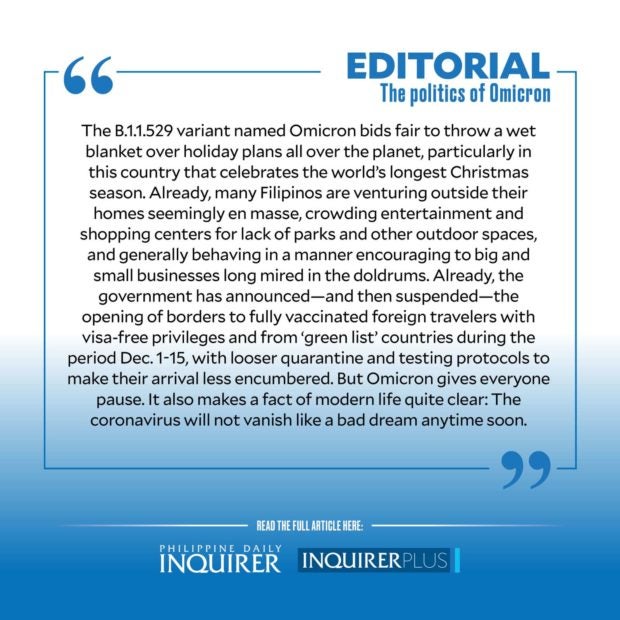 In stark difference to its dithering in closing Philippine borders to Chinese travelers in 2020, when COVID-19 was beginning to assume plague-like proportions, the government quickly barred inbound flights from South Africa and six other African nations; it has since added seven European countries to the “red list.” Elsewhere, similar flight suspensions have been imposed in the rush to contain Omicron, the latest variant of concern said to have more than 30 mutations of the spike protein that viruses use to get into human cells.

Scientists are hard at work in studying Omicron and how it may push back whatever gains have been made in the recent tentative reopening of economies battered by lockdowns and shutdowns. But their study could take weeks to be done.

Meanwhile, in a report by Al Jazeera, South African Health Minister Joe Phaahla lamented the “unjustified” and “counterproductive” reactions of world leaders in “finding scapegoats to deal with what is a worldwide problem.” Phaahla said the travel bans were a “wrong” and “misdirected” approach (and indeed the WHO warned on Friday against imposing travel restrictions at this early stage). He compared the daily infections in South Africa (3,000 on Friday, up from 300 two weeks ago) and in certain European countries (more than 50,000 a day)—the same countries, he said, “now reacting in this draconian manner.”

Worldwide, COVID-19 is exposing political realities including vaccine inequality and, now, what South Africa’s Department of International Relations and Cooperation called the discriminatory ban on flights from its country and region that had inflicted much damage not only on family life but also on business and industry.

“This latest round of travel bans is akin to punishing South Africa for its advanced genomic sequencing and the ability to detect new variants quicker,” it said pointedly. “Excellent science should be applauded and not punished.”

Here, with Omicron looming, the first “Bayanihan Bakunahan” is on its last day today. The target of 15 million vaccinations was earlier slashed to 9 million. The weary observer may wonder if there is a connection between the lowered jab target and the fact that 50,895 of the target number of 160,000 volunteers were still needed four days before the Nov. 29-Dec. 1 blitz. Volunteerism, though noble, obviously has its limits. Many exhausted health frontliners are still awaiting the emergency allowances due them by law. And as the Pharmally issue continues to show, skillful operators can make billion-peso pandemic funds disappear.