Not the time for neutrality | Inquirer Opinion
Close
menu
search

Not the time for neutrality 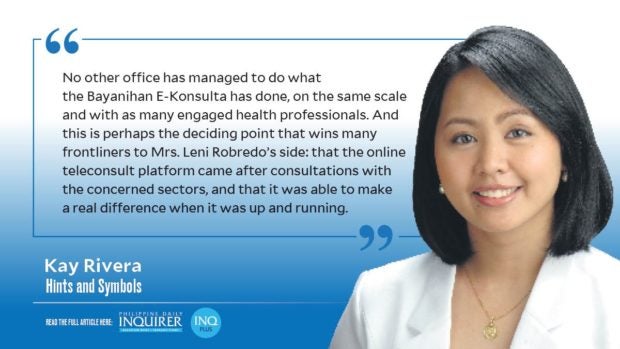 The season for political campaigns is upon us, and political colors are everywhere. It’s become increasingly clear that the stakes are high, with the elections poised to decide the fate of several political dynasties at once. It could be the magnifying effect of social media or the paid numbers that go into engagements for political posts, but it seems like a tense, polarizing battle all around that has taken on a soaring, good-versus-evil quality.

It is also a time when many look to frontliners, who see firsthand the worst of the pandemic, for their political bets. I’ve made much ado about physicians being political animals, because inherently health has always been political. Still, despite the involvement of health professionals in political life, by and large, they are more likely to express opposition to candidates than to loudly support them. Nowhere are the effects of systemic inequality, corruption, and the general failure of systems more visible than in our hospitals, clinics, and barangay health centers; a certain pessimism is developed as a result of such moral injury, and so it’s less easy to loudly pin our hopes, and by extension our reputations and votes, on any politician. It’s also for this reason that this column has never endorsed a leader. Elections have largely become a matter of choosing lesser evils than championing heroes, anyway. Moreover, health care workers may often feel the need to show neutrality for the sake of their patients, who come from all walks of life and must feel welcomed in their healthworker encounters.

My intention now is to write of how frontliners, previously color-less, are finding that we have the chance to support a candidate whose pandemic track record shows enough competence to inspire confidence in a health system overhaul. Political families, longstanding rivalries, and old dictatorships aside, the facts should speak for themselves. We saw in real time that the Office of the Vice President did its best to fill in the gaps of the national pandemic response: transport for frontliners, dormitories, personal protective equipment, medical supplies, supplies for disasters, and food were sourced and distributed by this office, often while helping different sectors (like disenfranchised drivers and dressmakers out of work) at the same time. At the request of one hospital aiming to lift their frontliners’ spirits, a haircut event was even held. And perhaps anyone can mobilize donations (though, clearly, not enough of these monied political dynasties have done so); but no other office has managed to do what the Bayanihan E-Konsulta has done, on the same scale and with as many engaged health professionals. And this is perhaps the deciding point that wins many frontliners to Mrs. Leni Robredo’s side: that the online teleconsult platform came after consultations with the concerned sectors, and that it was able to make a real difference when it was up and running. It continues to do so, providing consults to decongest hospitals of non-urgent cases, and providing a link between hospitals and patients when possible.

FEATURED STORIES
OPINION
Return to the classrooms!
OPINION
Spying on our working poor
OPINION
In voting for next president, facts should bear out perceptions

One of the frontliners’ woes in the pandemic is that we have been called heroes but are underrepresented, sidelined, or ignored, in discussions of national import that should be entrusted to public health and science experts. (One recalls Harry Roque’s berating of doctors at a pandemic task force meeting.) The capacity to listen to concerned sectors instead of forcing blanket solutions, then relying on military strength to enforce them, is a game-changer. One remembers the Swab Cab, which was implemented when the idea of widespread COVID-19 testing was being eschewed. It is for this reason that frontliners who were previously color-less are showing up in large numbers to support a political candidate: because the candidate’s team’s contributions to the COVID-19 response were based on collaboration and study.

The health care field is not a monolith; we do not all homogeneously support one candidate. For instance, while the majority of the profession may be soundly pro-vaccination, we still have physicians who ignore the science and who are staunchly anti-vax. While many recognize the gaps in the COVID-19 response and how incompetence and corruption worsened outcomes, many don’t see the gaps at all; some even continue to enable the worst of the administration. Thus we may not all see eye to eye on a choice of candidate. Still, I remain optimistic that we will eventually vote into power a team of leaders who will be able to begin to undo the damage of the last two years, and make a dent in overhauling the systems that allowed this degree of damage in the first place. We have under seven months to go and the stakes are indeed high; it is no longer the time for neutrality, but a time of great moral import, and a time for health care workers to make decisions toward a better health care system.

Read Next
Visual storytellers of our social reality
EDITORS' PICK
Gear up and get ready to play with Yamaha Mio Gear
Mobile COVID-19 vaccination for commuters, transport workers set at PITX
Acer starts the year off strong with the Aspire Vero National Geographic Edition
PH to send 584 athletes, 161 officials to Vietnam SEA Games
SSS: Members on home quarantine due to COVID-19 can apply for sickness benefit
Kalinga, Ifugao, Mt. Province, N. Samar will be under Alert Level 4 from Jan 21-31
MOST READ
Mayor Vico counters vice mayor: ‘Did I say anything about his family?’
Imelda Marcos trends on Twitter after octogenarian jailed for allegedly stealing mangoes
Municipal court in Pangasinan sets arraignment for ‘Lolo Narding’
Villar backs implementation of EDSA decongestion blueprint
Don't miss out on the latest news and information.