Filipinos, particularly in the provinces, continue to fall prey to sweet-talking swindlers, with victims of recent pyramiding scams losing billions of pesos of their hard-earned money, according to reports. The pandemic may have exacerbated this problem, as massive job and income losses have led many unscrupulous individuals to take advantage of ordinary citizens’ desire to earn in other ways and make money fast.

Last month, at least 300 residents in Bohol province sought the help of the police to recover some P2 billion they said they lost to people behind a new “repa” or “paluwagan” scheme. Bohol Gov. Arthur Yap asked the National Bureau of Investigation to investigate the informal money-lending and saving system; at least 150 affidavits have now been filed by “buyers and sellers” of the fraudulent investment venture. The same scam also victimized residents in the Davao region. Simplicio Sagarino, chief of Davao City’s Anti-Scam Unit, said about 50 people filed complaints with his office; some of the complainants claim to have invested as much as P10 million, lured by the high returns received by those who joined the scheme earlier.

The modus is the same. In the Bohol case, the people holding the money were convinced to invest in the pot through so-called “coordinators” and “administrators” who promised high returns in a short period. But as always with Ponzi schemes (after Charles Ponzi, the pioneer of the scam in 1920s America) where earlier investors are paid from the money taken from newer investors, the system proved to be unsustainable in the end. According to an Inquirer report last month, a woman went to the provincial police headquarters at Camp Francisco Dagohoy in Tagbilaran City asking policemen to help her recover P35 million she was set to return to her “paluwagan” members. She claimed she failed to release the payout when the administrators and coordinators—whom she didn’t know—disappeared. “I have been receiving death threats from my buyers,” she lamented. “If I can’t return the money or even the capital, they said they will kill me.” 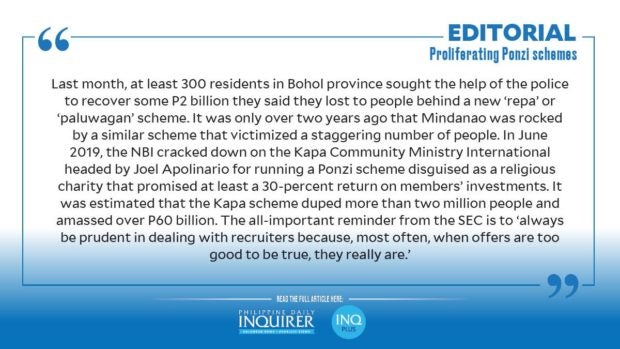 Those behind the scheme in Davao did the transactions online, requiring prospective members to join designated chat groups where both the scheme’s administrators and investors met and agreed on the investment terms. The pay-in was through online wallets, on the promise that a P1,000 pay-in, for instance, would grow to P2,500 after one week.

It was only over two years ago that Mindanao was rocked by a similar scheme that victimized a staggering number of people. In June 2019, the NBI cracked down on the Kapa Community Ministry International headed by Joel Apolinario for running a Ponzi scheme disguised as a religious charity that promised at least a 30-percent return on members’ investments. It was estimated that the Kapa scheme duped more than two million people and amassed over P60 billion. Apolinario was nabbed in a secluded private resort in Surigao del Sur in July last year, but as if to thumb his nose at the government’s ability to make him pay for his alleged crimes, he is now running for senator in the May 2022 elections.

Another scam that sprouted, again targeting Mindanao folk, was Rigen Marketing, which authorities said was able to amass up to P8 billion from thousands of victims in the Davao Region by offering a 400-percent return on investments.

President Duterte ordered the shutdown of such unauthorized investment ventures and the arrest of their organizers in February 2020. But despite the crackdown, the Securities and Exchange Commission noted that same year the continuing prevalence of the phenomenon. It said “the situation has been doubly challenging” as the fraud operators had turned to online platforms, thus reaching more unsuspecting individuals who were quarantined at home. In the first 11 months of 2020, the SEC revoked the registration of 2,081 financing and lending companies and issued cease-and-desist orders against 58 illegal online lending operators. Enforcement actions taken by the SEC’s investor protection department included the issuance of 119 advisories to protect investors from scams during the period. “That’s unprecedented, because usually in a year, we issue roughly 30 to 40 advisories only,” said SEC Commissioner Kelvin Lester Lee.

The public must heed the SEC’s advice to be extra-careful and discerning when doing investments to avoid being defrauded. “(T)hose who have money to invest should ensure that the platforms they are investing in must have a good track record and not just an overnight presence in cyberspace,” said the agency. Would-be investors should visit the SEC website to confirm if the entities they are dealing with are legitimate. The all-important reminder is to “always be prudent in dealing with recruiters because, most often, when offers are too good to be true, they really are.”