Visual storytellers of our social reality 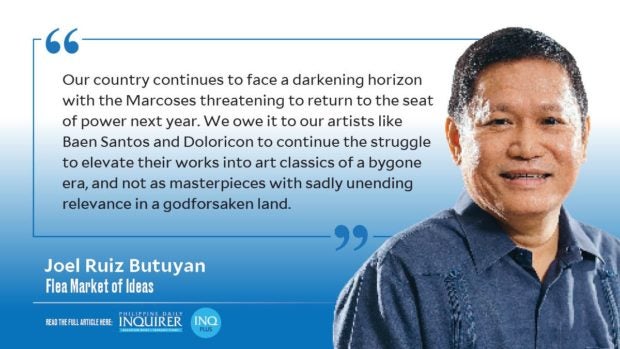 I wasn’t particularly close to both of them, but when I heard that two senior artists died recently, I felt an immense loss for our nation. Our loss is profound, because it’s their kind of art that we desperately need in this very trying time for our country. A time when, as a people, our collective soul is being ripped apart because we have become so divided in our morals and in our sense of right and wrong.

The two artists who have passed on are Pablo “Adi” Baen Santos and Leonilo “Neil” Doloricon. Baen Santos died last week, Nov. 24, 2021, at age 78. Doloricon died last July 16, 2021, at age 63. They were among our first generation of social realist artists, whose ranks include Renato Habulan, Antipas Delotavo, Nunelucio Alvarado, and Jose Tence Ruiz.

Social realism is the term used for works of art that call attention to the social and political realities of our country. Our society has been forever plagued with problems of poverty, injustice, corruption, and inequality. Social realists produce artworks highly critical of these issues. Protest art is another term used to describe these artists’ output, because they flourish with exceptional artworks during times of political oppression.

Baen Santos and Doloricon were activist-artists during the Marcos dictatorship, producing heart-wrenching works that depicted the injustices under the regime. Their works are in the permanent collection of the National Museum, where they are displayed as treasures of our race to be appreciated by future generations.

I have been collecting artworks for the past 21 years and I’ve been partial to paintings that depict social realist themes. This is due to the fact that I handle human rights cases as part of my public advocacy, apart from my bread and butter work as a private law practitioner.

Among the artworks in my collection that I am particularly proud of is a Baen Santos painting titled “Enhorabuena A Los Ilustrados” (Congratulations to the Ilustrados). Santos depicted the Philippines as a larger-than-life woman garbed in baro’t saya. She waves a flag that evolves, from left to right, as the flags of Spain, the United States, and an independent Philippines — an unmistakable reference to our history. The woman is surrounded by ordinary masses who are in various poses of being killed while in the act of linking arms to protect the motherland. Cordoned off from the dying masses are upper-class Filipinos partying and dancing in all their finery, indifferent to the killings. In a single canvas, Baen Santos brilliantly portrayed our history and what ails our society.

Also among the treasured works in my collection is my cache of Doloricon linocut/rubbercut/woodcut prints. When I saw the exhibition of Doloricon’s black and white prints in the National Museum, I was so impressed by the artist’s creative portrayal of social injustices in our country. One particular work, titled “Mga Martir” (The Martyrs), shows three bodies buried on the ground. Trees have grown out of the corpses and the artist ingeniously turned their branches into protesting masses.

Impelled to search for Doloricon’s available works, my wife and I got personally introduced to the artist. We paid for five prints, but Doloricon surprised us by gifting us with additional prints for free, and we ended up owning more than a dozen of his masterpieces.

I have always been awed by the talent and creativity of social realist artists who are able to masterfully depict in a single frame of canvas—in ways that are dramatic, lyrical, acerbic, or tragic—what writers need to express in a whole novel, what songwriters desire to convey in a full song, and what film directors want to portray in an entire movie. Baen Santos and Neil Doloricon belong to our pantheon of visual storytellers who are masters in this regard.

Our country continues to face a darkening horizon with the Marcoses threatening to return to the seat of power next year. We owe it to our artists like Baen Santos and Doloricon to continue the struggle to elevate their works into art classics of a bygone era, and not as masterpieces with sadly unending relevance in a godforsaken land.

Read Next
Bloody, bizarre twists in election ‘teleserye’
EDITORS' PICK
Gear up and get ready to play with Yamaha Mio Gear
Acer starts the year off strong with the Aspire Vero National Geographic Edition
Over 3 Million worth of prizes to be won at Smart Padala’s SENDali Manalo Promo!
Uproar over no vax, no ride policy: Maybe it’s time for gov’t to say sorry—Bello
97% of COVID-19 beds at PGH currently occupied
Japan brings back virus restrictions over Omicron surge
MOST READ
1Sambayan names 7 aspirants in its 2022 Senate lineup
Emma Stone calls Andrew Garfield a ‘jerk’ after he ‘lied’ about his ‘Spider-Man: No Way Home’ appearance
Guevarra to Acosta: Obey rules on unvaccinated
PH to import 60,000 tons of fish to cover shortage
Don't miss out on the latest news and information.