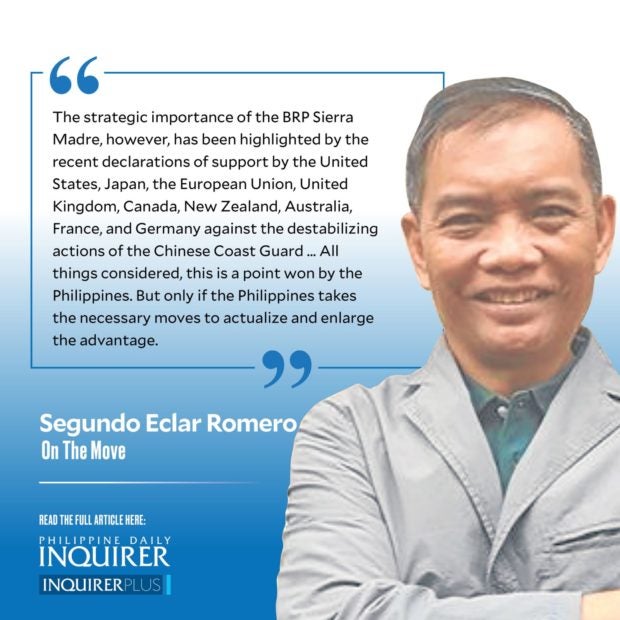 As early as 2013, Jeff Himmelman in a New York Times article quoted Maj. Gen. Zhang Zhaozhong of China’s People’s Liberation Army regarding Ayungin Shoal and other Philippine territories: “We should do more such things in the future. For those small islands, only a few troopers are able to station on each of them, but there is no food or even drinking water there. If we carry out the cabbage strategy (choking with layers of militia and Coast Guard like a cabbage), you will not be able to send food and drinking water onto the islands. Without the supply for one or two weeks, the troopers stationed there will leave the islands on their own. Once they have left, they will never be able to come back.”

The strategic importance of the BRP Sierra Madre, however, has been highlighted by the recent declarations of support by the United States, Japan, the European Union, United Kingdom, Canada, New Zealand, Australia, France, and Germany against the destabilizing actions of the Chinese Coast Guard. The United States, in particular, mentioned the crucial point that an attack on a public vessel of the Philippines will trigger US obligations under the PH-US Mutual Defense Treaty. The Chinese might show only disdain for the puny but loud Philippine protestations, but they certainly do not want to overstep and trigger a shooting conflict in the West Philippine Sea that is not in anybody’s interest.

All things considered, this is a point won by the Philippines. But only if the Philippines takes the necessary moves to actualize and enlarge the advantage.

FEATURED STORIES
OPINION
No funds for barangay polls? Ask BBM
OPINION
All in the family
OPINION
Solving the party-list fiasco

For instance, what is the point of maintaining such a small contingent of nine Marines led by a mere lieutenant? What critical importance does that convey to both friends and enemies? What kind of respect and visibility will that contingent muster?

I would imagine that a 44-man contingent will be a more appropriate force on the BRP Sierra Madre. During its heyday, that ship had accommodations for 266 personnel.

That is just for starters. I would put the BRP Sierra Madre under a Training and Doctrine Command or National Security Policy Center, say in partnership with the National Defense College of the Philippines (NDCP) and/or the Armed Forces of the Philippines Command and General Staff College (AFPCGSC), and use it for academic, policy, and training purposes that can host officer students doing advanced studies on national security policy and related subjects. Let Philippine Military Academy graduates appreciate the basics of external security and hone their sense of patriotism on the BRP Sierra Madre.

If this were the strategy, it would require robust and prompt systems to put form behind the function. Programs will be designed, personnel will be assigned, logistics will be provided. Of course, the BRP Sierra Madre will have to undergo major repairs and be refurbished. A fresh coat of paint over its rusty body will not only lift the spirits of the Filipino Marines but also lift the eyebrows of the Chinese Coast Guard troops observing their actions. Then perhaps it would be possible to further enhance the optics—Marine personnel with crewcuts, in full uniform, unless at work repairing the ship.

Surely this will raise the hackles of the Chinese, but juxtapose that for a moment against the current default sorry situation that cannot even be considered a strategy, because all that it will lead to is exactly what the Chinese are waiting to happen—the elimination or departure of the tiny Marine contingent, possible under a variety of natural, chemical, biological, or other man-made triggers.

Even as just a matter of optics, the current situation in the BRP Sierra Madre is embarrassing and brutish. While the beached vessel is physically crumbling, what is the emotional and psychological state of the Marines stationed there? One of them, in a moment of despair, wrote in big letters on the wall of the ship: “How long can our personnel hold the line here in Ayungin if our DAILY NEEDS cannot be PROVIDED!!! Even machine need a rest do as we!!! Those who are in the Top you are blind you cannot see D’Reality!!! Tamaan sana kayo ng KIDLAT para makita nyo kami sa baba nyo!!! Ito lang ang kanilang nakikita $P(eso), $P(eso).”