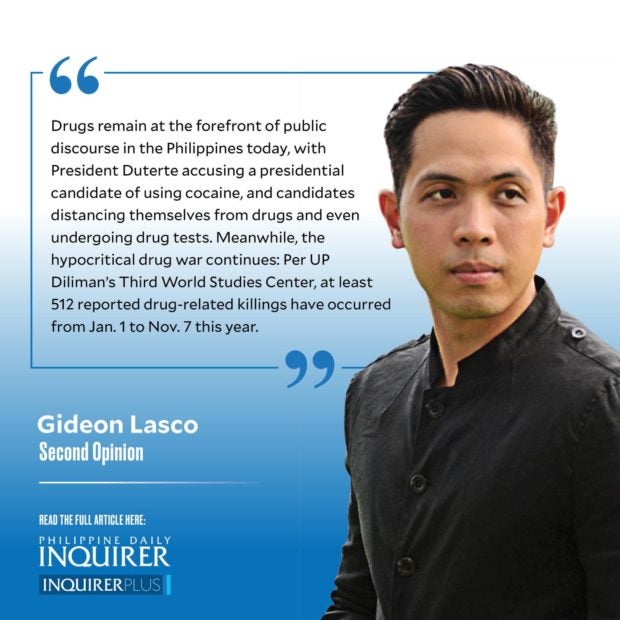 Drugs remain at the forefront of public discourse in the Philippines today, with President Duterte accusing a presidential candidate of using cocaine, and candidates distancing themselves from drugs and even undergoing drug tests. Meanwhile, the hypocritical drug war continues: Per UP Diliman’s Third World Studies Center, at least 512 reported drug-related killings have occurred from Jan. 1 to Nov. 7 this year.

In an age of lowered standards, I suppose we have to welcome the fact that many of the candidates profess that they will not condone extrajudicial killings. But is drug policy simply a choice between killing people or sending them to “rehab centers”? Are there no alternatives? And can we also not interrogate the very paradigm that informs how drugs are viewed in our country—that all drug use is problematic and evil and must therefore be eliminated?

The idea for the book started when President Duterte embarked on his drug war and it became very clear that there was very little local material with which to respond to the prevailing discourse of “we should kill drug addicts.” I myself had done research on shabu use among young people from 2011-2013, finding that they use shabu as pampagilas (i.e. a performance enhancer) for the many, often very demanding, jobs they had to take. Far from being “zombies” or “subhumans,” many of them were just trying to get by in an informal economy where performance meant survival.

That was around the time when I met scholars who were likewise seeking to challenge the regime’s discourses and policies through research. While many of us were publishing in academic journals, we realized that a full-fledged book would make our research findings accessible to the public while allowing us to also feature past scholarship.

A summary of the book will not fit this column—which is exactly the point of writing it: We need to acknowledge the complexity of drug issues if we are to appropriately respond to them. Even so, I would like to share some key messages that can contribute to elevating the drug policy discourse in the country.

First, we need to let go of our biases about drugs and people who use them.

As contributors Michael Tan, Emma Porio, Christine Crisol, and the late Richard Zarco show, drugs are a social and political construction. Pharmacologically speaking, we are all “drug users” because of the caffeine we drink daily, or the alcohol many of us consume occasionally; as Ambeth Ocampo writes in his chapter, even Jose Rizal tried hashish as a teen. In the book, we try to view various substances without the prejudices that are attached to each of them.

Second, we need to interrogate the drug war by looking at its consequences on communities and documenting the roles of various sectors in enabling or resisting it. Thus, Mary Racelis, and the team of Ica Fernandez, Mixkaela Villalon, Abbey Pangilinan, and Nastassja Quijano, show how communities in Metro Manila have responded to the drug war. Anna Warburg presents the perspectives from the police themselves, while Filomin Gutierrez presents counter-narratives of arrested persons for drug offenses. Cheryll Soriano, Clarissa David, and Jenna Atun, meanwhile, problematize how the media has echoed government discourse, and Jayeel Cornelio and Erron Medina chart the responses from Christian groups.

Finally, we need to reimagine drug policy in ways that are humane and evidence-based, in ways that account for the role of local government units (as explained by Ronald Mendoza, Michael Henry Yusingco, and Jayvy Gamboa), social movements (as articulated by Nex Bengson in a case study of the local cannabis movement), international actors (as pointed out by regional drug policy advocates Gloria Lai, Claudia Stoicescu, and Ricky Gunawan), and even the arts and the humanities (as argued by poets Kristine Ong Muslim and Vincen Gregory Yu).

“It is time to decriminalize drug use,” the physician-lawyer Lee Yarcia argues in his chapter that calls for urgent criminal justice reforms. “We need to explore harm reduction ordinances,” human rights lawyer Cathy Alvarez echoes in hers.

If we can get our presidential candidates to debate about such propositions, then it would be an achievement in itself. As our book hopefully conveys, the starting point for elevating the drug discourse is recognizing that there is more to the drug war than Rodrigo Duterte, and there is more to drug issues than the drug war.

Read Next
Decrepit patriotism
EDITORS' PICK
Gov’t eyeing COVID-19 tests in pharmacies
Municipal court in Pangasinan sets arraignment for ‘Lolo Narding’
Mobile COVID-19 vaccination for commuters, transport workers set at PITX
31,173 new COVID-19 cases push PH’s active tally to 275,364
Gear up and get ready to play with Yamaha Mio Gear
Acer starts the year off strong with the Aspire Vero National Geographic Edition
MOST READ
Imelda Marcos trends on Twitter after octogenarian jailed for allegedly stealing mangoes
Octogenarian jailed for ‘stealing mangoes’ freed after people chip in for bail
If elected VP, Sara Duterte will push for mandatory military service for all Filipinos
Help pours in for octogenarian jailed for ‘stealing’ mangoes in Pangasinan
Don't miss out on the latest news and information.