What country are you voting for? | Inquirer Opinion
Close
menu
search

What country are you voting for? 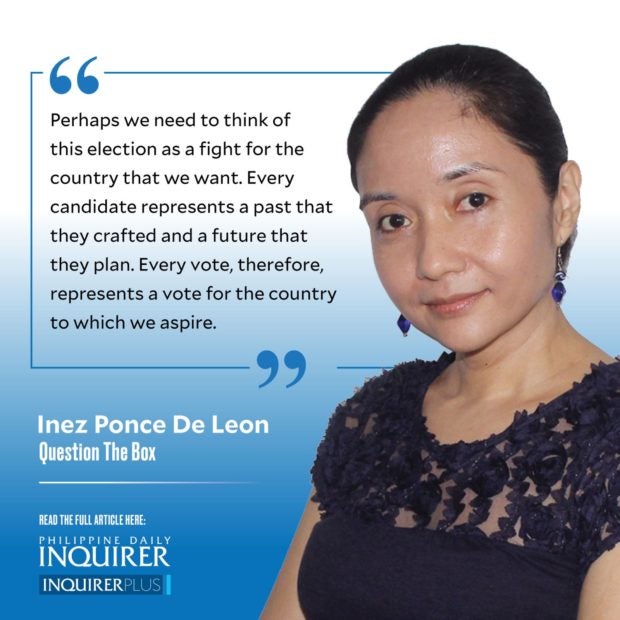 After weeks of drama, shifting allegiances, and strange alliances, we now have partnerships hatched in greed and matches made in hell. The warnings are trickling through the jokes online: It will be an uphill climb. We are fighting for the heart and soul of the Filipino.

If we go by these reminders, however, then we might perceive each other as mere mountains to be climbed over, mere perceptions to be contested, mere opinions to be attacked. If we go by the “fight for the heart and soul” argument, then we might alienate those who are still thinking about their vote and cannot be pressed into a decision; we also judge those who have made a decision, for indeed, who are we to say that those whose opinions disagree with ours have neither heart nor soul to speak of?

A vote for a certain person means that we are willing to accept a country where leaders are allowed to whine about imagined offenses, but where citizens are labeled as communists, dissenters, and destabilizers when they speak up about obvious and documented truths.

A vote for a certain person means that we subscribe to the notion that any corporation close to those in power is given the freedom to do whatever it wishes with our tax money; and, when discovered, will be defended and protected by a president who obstructs a formal Senate investigation.

A vote for a certain person means that we wish to live in a country where loyal followers are patronized and protected even when they break the law—but the poor are crucified and killed for their crimes, and then are expected to simply bow their heads and obey orders even when they have lost their livelihoods because of poor government planning and strategy.

A vote for a certain person means that we will remain silent when government officials publicly hurl meaningless insults at those who speak up against them, or sexually harass women and call it “normal,” or curse international bodies that have enough evidence to investigate their crimes.

A vote for a certain person means that we buy into inane family dramas, vague and provocative public announcements that are immediately withdrawn and/or amended when people protest, people who flout the rule of law but want to run for legislative positions, people who make a mockery of the election process by running for national positions for which they have neither expertise nor moral high ground.

In voting for certain people, we must be willing to forget history and disregard the lives and sacrifices of those who spoke up against the evils of the dictatorship. To cast this vote is to live a lie, to deny what has been documented and for which the family has been convicted, to accept a government built on excuses and secrecy.

And yet there are good people out there, who have actual track records of public service despite years of being rejected, spurned, and threatened by the current administration. To vote for these good people is to accept a country where this track record could translate to services given in a straightforward way: no excuses, on a meager budget, with efficient work, with calm that calls for everyone to help instead of attacking each other.

We can vote for a country where farmers get support when they once had no voice, where doctors get the equipment they need without being told that papers are still running up and down bureaucratic channels, where people can actually get hospital beds or blood donations or just help. It might be rice porridge or PPE (personal protective equipment), but it’s a country where every single step is counted because it can make a difference.

The 2022 vote is not about uninformed insults or supposed sins or the much-vaunted Solid North/South built on nothing but regionalistic vanity. The only solid thing at the end should be a country ruled by a government with an actual platform built on experience.

And if we get this right, then perhaps we will have a country that can escape the blackness of lies, deceit, excuses, and empty promises; one that embraces its diverse peoples; one that is rosy and pink with life once again.

13 cases detected in the Netherlands as Omicron variant spreads