The unbearable lockdown of Filipino children 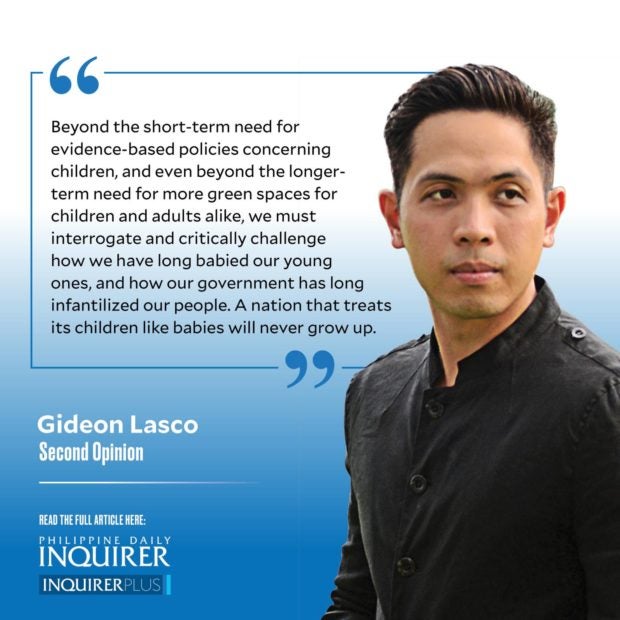 We’re approaching the two-year mark of the pandemic, and one thing now very clear is that how people experience it depends on one’s position in life: one’s occupation, country of residence, socioeconomic status, age, and gender.

Thus, while the Philippines rightfully deserves to be recognized as one of the worst places to be during the pandemic (until a few days ago we were still stuck in debating the need for those face shields), we need to ask which particular groups have had it worse, and in this column I would like to highlight one demographic: minors, or children below 18.

Medically speaking, children are actually the least vulnerable age group to COVID-19—a fact that confounded scientists at the beginning, given that for many other viruses, young children are at higher risk for poor outcomes. Of course, this does not mean that they are immune to the virus. But regardless of their actual COVID-19 risk, they have been impacted the most, not so much by the virus, but by the government’s pandemic response.

The “educational lockdown”—by some accounts the world’s longest—has meant that children have been cut off from the major source of physical, mental, and social activity during their formative years. While online learning is an increasingly workable alternative in many contexts (and kudos to all our teachers for trying their very best), there are noncurricular, but no less important benefits of being in school that children have been deprived of. Even as face-to-face classes are being “piloted,” the apparent restrictions (e.g. emphasis on useless plastic barriers but not on ventilation) speak of how the learning environment will continue to be unnecessarily difficult and inconvenient.

Kids have also been prevented from leaving their homes entirely. As I wrote in this space back in April, “keeping children indoors is an untenable policy, and cannot be continued without posing significant and lasting harm on the health and well-being of children, families, and communities.” It’s a warning that has only grown in importance today.

It is worth pointing out that as the last group to receive vaccines (informed in part by their perceived low risk), they are also being excluded—even if unintentionally—by the growing number of vaccine mandates, and this is particularly true for children below 5 who may be years away from getting their shots.

Thankfully kids are finally being allowed to go out, but even today, policies and popular attitudes continue to single out children, to a point where parents who let their kids go out are being shamed and cast as the new “pasaway.” Of course, there are valid public health reasons to keep kids from crowded places like malls, but is it the parents’ fault that they have nowhere else to go?

It need not have been this way. While almost all countries have imposed restrictions on children, most of them do not come close to the measures we have put in place, both in terms of their strictness and duration. Once the science became clear that the outdoors are a safe space and children are at minimal risk, many countries were quick to encourage children to go outdoors, just as they had been quick to prioritize reopening schools.

There are various reasons why we have failed our children in this regard, from decision-makers and experts being out of touch with the realities of poor and middle-class Filipino children, to the dearth of green and open public spaces in our overprivatized cities.

More fundamentally, however, I believe our policies have also been influenced by longstanding attitudes about children. In our country, children are perceived as vulnerable and powerless, unable to think for themselves, and policies have tended to reflect this thinking in ways that stifle children’s growth, independence, and critical thinking. To cite just one example: A few years back, a couple of field trip-related accidents led the DepEd and CHEd to suspend field trips altogether. While the manifest reason was safety, I believe such a totalizing response is reflective of the overprotectiveness with which we treat our young ones.

And so beyond the short-term need for evidence-based policies concerning children, and even beyond the longer-term need for more green spaces for children and adults alike, we must interrogate and critically challenge how we have long babied our young ones, and how our government has long infantilized our people.

A nation that treats its children like babies will never grow up.

Read Next
What country are you voting for?
EDITORS' PICK
PH logs 37,070 more COVID-19 cases; over 33K others recover
Comelec division junks petition to cancel Marcos COC for president
The best of bayside and city living at SMDC’s Sail Residences
Acer starts the year off strong with the Aspire Vero National Geographic Edition
‘Not yet the end’: Lawyer says Marcos Jr’s DQ cases to take lengthy process
Over 3 Million worth of prizes to be won at Smart Padala’s SENDali Manalo Promo!
MOST READ
NBI foils escape attempt of Kerwin Espinosa, two others
Marcos camp ‘extends hand of unity’ after COC cancellation bid is thrown out
Wendell Ramos finally gets to hold his newborn for the 1st time
No vaccine, no French Open for Djokovic, says French Sports ministry
Don't miss out on the latest news and information.