Senate President and vice presidential aspirant Tito Sotto on Tuesday joined the call for candidates in next year’s national and local elections to submit their statement of assets, liabilities and net worth (SALN), warning that voters would surely know that those “who refuse to (do so) cannot be trusted.” Sorsogon Gov. Francis Escudero, who is running to reclaim his Senate seat, had earlier issued the call “in the spirit of transparency and accountability.”

Better late than never for such officials to rediscover this basic requirement for honest public service, over five years into an administration that has flouted and ignored the law. Under the 1987 Constitution and Republic Act No. 6713, or the Code of Conduct and Ethical Standards for Public Officials and Employees, government officials and personnel are required to submit their sworn SALN documents within 30 days after assuming office, and not later than April 30 every year thereafter. They also have to disclose their business interests and financial connections, and declare the wealth of their spouse and unmarried children under 18 living in their households.

But that grandiloquent campaign promise was discarded as soon as the Duterte administration was in power. President Duterte has yet to release his 2018, 2019, and 2020 SALNs despite official requests from civic groups and the media.

This year’s roster of candidates for the top two posts appear to be more forthcoming with their SALNs. 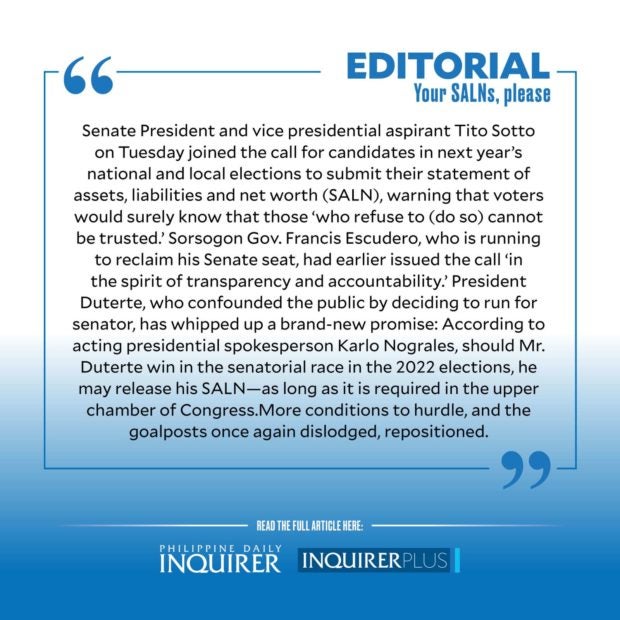 The Senate website contains the 2020 net worth of the 24 senators, most of whom are running for reelection or higher office. Even before his presidential run, Sen. Manny Pacquiao has been open about his massive net worth. Vice President Leni Robredo and Manila Mayor Isko Moreno, two more presidential aspirants, have disclosed their SALNs. Presidential candidate Ferdinand Marcos Jr. also made his SALNs available when he was a senator.

For some 30 years, the SALNs of Philippine presidents, Cabinet secretaries, and other government officials had been generally accessible to the public—until the Duterte administration unceremoniously scrapped that tradition.

Early on, Malacañang had evaded calls for the President’s SALN by saying, among others, that it was still awaiting the guidelines to be crafted by the Office of the Ombudsman, the designated custodian of the SALNs of the President, Vice President, senior officials, and star-rank military and police officers. The Ombudsman can issue circulars and guidelines on how citizens can secure copies of the document under a “public disclosure” policy.

But, rather than complying with the intent and spirit of the Constitution for greater transparency and accountability in public office, Ombudsman Samuel Martires, whom Mr. Duterte appointed in 2018, has spent his time obstructing instead the release of such documents. He has justified rejecting numerous requests for the President’s SALN as pursuant to the memorandum circular he himself issued last year, which listed new guidelines that severely limited access to SALNs.

Martires has even proposed five years’ jail time for any citizen who would make public comments or statements about the SALNs of public officials.

The President, whose consent is required for the release of his SALN under Martires’ roundabout rules, is seemingly only too happy to abide by the new restrictions. In rebuffing citizens’ demands for the release of the document, former presidential spokesperson Harry Roque said Mr. Duterte was “just respecting the guidelines issued by (this) … constitutional body tasked with promoting accountability amongst public officers.”

Note the staggering irony in those words.

But since it’s election time, the President, who confounded the public by deciding to run for senator, has whipped up a brand-new promise: According to acting presidential spokesperson Karlo Nograles, should Mr. Duterte win in the senatorial race in the 2022 elections, he may release his SALN—as long as it is required in the upper chamber of Congress.

More conditions to hurdle, and the goalposts once again dislodged, repositioned. Read: Dream on. Other officials may feel it’s still somehow their duty to be upfront and open with the public—but this administration, and its convenient ally the Ombudsman, have long outgrown that virtue.

Duque: Better to stay NCR under Alert Level 2 for now