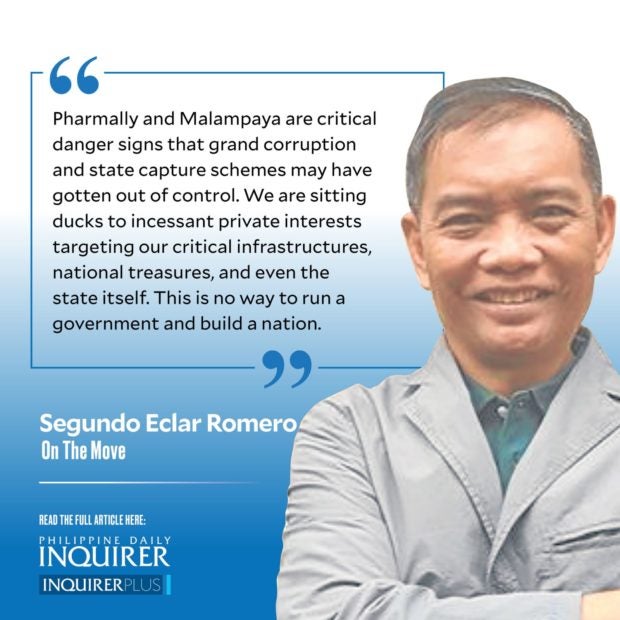 The controversy over Malampaya comes at an opportune time. The country is sensitized to grand corruption, courtesy of the Senate blue ribbon committee revelations on the Pharmally case, a scandal about how government officials cashed in on the people’s misery under the COVID-19 pandemic.

The characteristic aggressive defense of President Duterte of government regularity in its dealings and handling of Pharmally has created public anticipation that the hand of Malacañang will eventually be revealed. Mr. Duterte’s Teflon-like popularity has begun to melt as diehard belief among his adherents dissipates. In the end, if he is also prosecuted after his term, half of the six Presidents under the 1987 Constitution will have ended up in jail. That is a strong hint that the government under the 1987 Constitution needs a drastic overhaul.

How do we know if what we are seeing in the Malampaya case is corruption? Robert Klitgaard has a nifty formula: C=M+D-A (Corruption = Monopoly + Discretion – Accountability). The Basic Guide provides a “Four-Way Test.”

The perfect scenario for corruption is when:

“A few individuals hold all the power to make certain decisions.” (Did Energy Secretary Alfonso Cusi consult the President, the Cabinet cluster on infrastructure, or economic development, or human development and poverty reduction, or policy advisory bodies like the National Academy of Science and Technology, before he decided it was not in the interest of the Republic of the Philippines to own and operate Malampaya?)

“Public information about decision-making is scant.” (Were the negotiations for the Udenna buy-out of Chevron and Shell ownership in Malampaya aboveboard or done with inappropriate stealth, considering the government’s right of first refusal?)

“Procedures to hold decision-makers accountable do not exist.” (Were reasonable technical, financial, environmental, national security, and public accountability due diligence procedures for this strategic type of transaction followed?)

“Decisions can yield personal (private) rewards for decision-makers.” (Were conflicts of interest between the private and public office interests and personas of the public official involved in this transaction declared and resolved?)

In the wake of the Estrada and Gloria Arroyo corruption scandals, there had been a surge of anticorruption mobilization and preventive initiatives. But that anticorruption vigilance has given way to fatigue and disillusionment. The most active anticorruption civil society network, the Transparency and Accountability Network (TAN), has been silent for years. Transparency International reports that it no longer has a chapter in the Philippines. The Development Academy of the Philippines, which developed and applied the innovative Integrity Development Review and Corruption Vulnerability Assessment tools on government agencies, has not followed through. The Ombudsman, briefly rejuvenated under Conchita Carpio Morales, is back in administration rearguard mode, filing just 66 cases before the Sandiganbayan in 2021, down from 739 filed in 2018.

One would imagine that with the gargantuan intelligence funds allocated, the country will have reliably and competently flagged the slightest threat to the economy, the government, the territory, and the people. The fetish of the military and intelligence community for the artifacts of the spent communist insurgency, such as the burning and confiscation of Leftist paraphernalia in university libraries, is troubling.

Where is the effort to catch each malevolent scheme to insert enemies of the state through proxy individuals and organizations? Where are the operations to secure critical assets like Malampaya, election-related logistics services, telecommunications backbones, and former military installations like Sangley, Subic, and Clark, and place them firmly in Filipino hands? At these times, one misses the Economic Intelligence and Investigation Bureau under Gen. Jose T. Almonte that President Estrada had abolished.

Pharmally and Malampaya are critical danger signs that grand corruption and state capture schemes may have gotten out of control. We are sitting ducks to incessant private interests targeting our critical infrastructures, national treasures, and even the state itself. This is no way to run a government and build a nation.