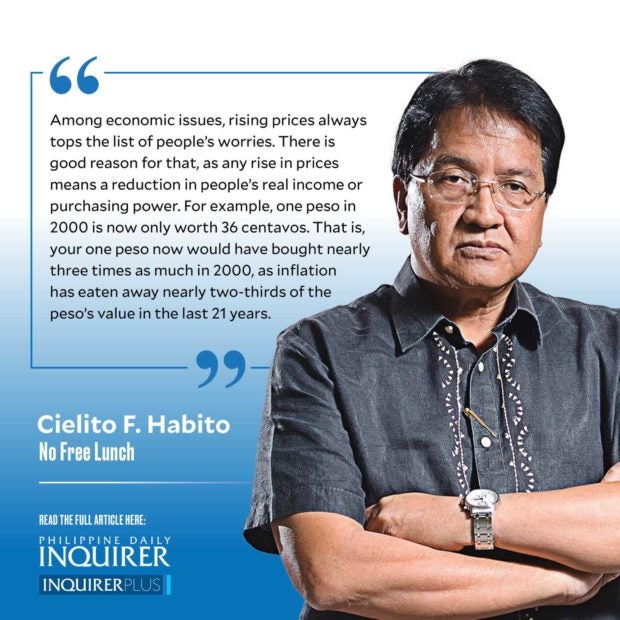 Among economic issues, rising prices always tops the list of people’s worries. Surveys consistently show inflation management to yield the lowest approval rating in the list of items respondents are asked to judge the government on. There is good reason for that, as any rise in prices means a reduction in people’s real income or purchasing power. For example, one peso in 2000 is now only worth 36 centavos. That is, your one peso now would have bought nearly three times as much in 2000, as inflation has eaten away nearly two-thirds of the peso’s value in the last 21 years.

Last month’s reported inflation rate of 4.6 percent means that you’d now have to spend P104.60 for every P100 you spent a year ago. That might not sound like much to some. After all, we had seen inflation rates of up to 50 percent before. The Marcos martial law years saw 17 percent average annual inflation, with historical peaks of 34 and 50 percent that happened in 1974 and 1984, respectively. This tapered to an annual average of 10 percent in the post-Edsa Aquino years, further down to 7.6 percent under Ramos, 6.4 percent under Estrada, 4.7 percent under Arroyo, 3.1 percent under the younger Aquino, and 3.2 percent so far under Duterte. With year-to-date average inflation now running at 4.5 percent, and an outlook of further price pressures on various key commodities including oil and food, the last three decades’ downward trend appears headed for a reversal.

All this is particularly painful for a fixed wage earner who hasn’t seen wages rise in the past year, or worse (and more likely), for those whose income dropped from lack of work due to the economic decline. To them, the current inflation rate could mean the difference between adequacy and deprivation, and possibly between health and illness. Indeed, the inflation rate reported by the Philippine Statistics Authority for the bottom 30 percent income households (now a regular feature of their monthly inflation reports) is higher at 4.9 percent. This is because food and beverages, which weigh more heavily in the budgets of lower income groups, have seen prices rise faster than in other commodities, with food inflation posted at 5.4 percent. Notable among these are meat, whose prices rose by 15.2 percent, vegetables (by 12.7 percent), and fish (by 9.4 percent).

For meat, the problem lies primarily in the price of pork — the second largest protein source for Filipinos, next to fish — which has been elevated because African swine fever (ASF) has decimated about a third of the country’s swine population. Fish prices have been affected by the regular closed season for key fishery areas necessary to permit rejuvenation of fish stocks, while vegetable supplies appear to have been affected by recent weather disturbances.

The good news is that price increases in these commodities have been slowing down from even faster rates in previous months. This is largely due to government’s deliberate easing up on imports, particularly of pork and fish products, meant to fill the supply gaps that have caused prices to spike in past months. But the government must also be relentless in combatting ASF, which continues to ravage swine-growing areas, now especially in the northern part of the country. Focused attention needs to be given to restoring production and raising productivity in swine, vegetables, and fish, as we cannot be overly reliant on imports over the longer term.

These interventions are urgent and important, as our current inflationary episode has been a supply side problem, not the textbook “demand-pull” inflation that comes with an overheating economy where “too much money is chasing too few goods.” Central banks would manage the latter by reducing money supply in the economy and raising interest rates, which would quell demand and defuse overheating. But ours is far from an overheating economy, and our Bangko Sentral knows that a monetary fix could only choke an already struggling economy further. How much longer it can hold back hinges on our success with easing the supply side—and that is why this is extremely urgent.

All told, taming inflation could well be our biggest economic challenge ahead.