Troubling is an understatement to describe the deal the Commission on Elections (Comelec) entered into on Oct. 29, when, over the objections of election watchdogs and other sectors, it went ahead and gave the P536 million contract for the transport of official ballots, vote-counting machines (VCMs), and other election paraphernalia to F2 Logistics Philippines Inc.

The objectors worry that the deal could compromise the integrity of the 2022 national elections given the conflict of interest at the heart of the deal. F2 Logistics is a subsidiary of Udenna Group, the conglomerate owned by Davao businessman Dennis Uy who is well-known as a close friend of President Duterte and a top contributor to his 2016 presidential campaign. Uy shelled out P30 million to help Mr. Duterte get elected; in the succeeding years, the businessman has gone on an aggressive buying spree, snagging the country’s third telco and the controlling stake in the Malampaya natural gas field, among others.

When the Comelec bid out its logistics contract worth P1.61 billion, F2 Logistics submitted a P535.99 million bid, besting three other companies—LBC Express, Airspeed International, and 2Go Express Inc. It was declared the winner on Aug. 24 and was issued a notice of award on Sept. 15.

The deal involves transporting official ballots, ballot boxes, VCMs, election forms and supplies, training materials, and computerized voters’ lists to be used on election day, and even for the field tests prior to May 9. F2 Logistics will also provide and secure provincial warehouses or local hubs for VCMs prior to their scheduled distribution to polling centers, and bring back to the central warehouse the VCMs, consolidation or canvassing system machines, transmission devices, VCM external batteries, generator sets, and other election equipment.

It is obvious why this arrangement is seen as problematic: The soundness of the election results will hinge in part on the impartiality and trustworthiness of the Comelec’s logistics partner as it transports and handles the materials that may well determine the winner of the May 2022 polls. But that impartiality and trustworthiness are immediately up for debate given the close ties of the F2 Logistics owner to the current administration, which has a huge stake in prevailing in the contest. As Gus Lagman of the National Citizen’s Movement for Free Elections warned, merely delaying the delivery of election paraphernalia could compromise the elections: “I’m not saying they are going to do it, but all I’m saying is it’s possible for a service provider to do those things.” 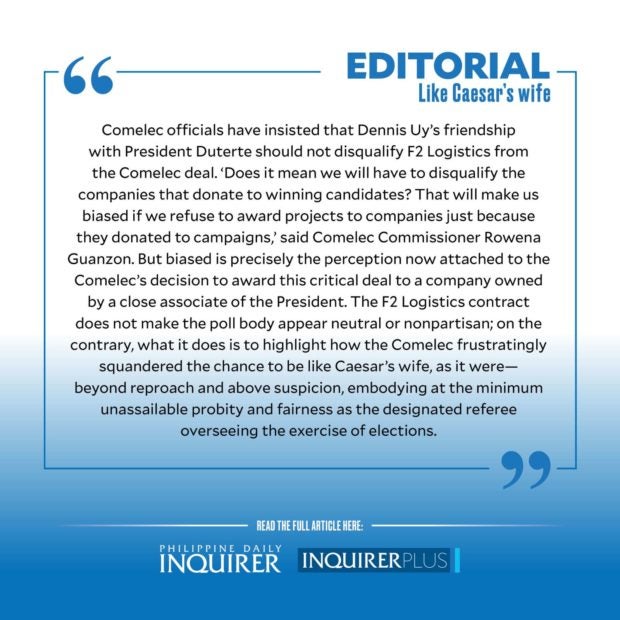 Comelec officials have insisted that Uy’s friendship with Mr. Duterte should not disqualify F2 Logistics from the deal. “It’s not automatic that he is disqualified because he was a contributor. We know that many businessmen are major contributors to different (politicians) so it’s not automatic,” said Comelec Chair Sheriff Abas.

Added Comelec Commissioner Rowena Guanzon: “Does it mean we will have to disqualify the companies that donate to winning candidates? That is not right. That will make us biased if we refuse to award projects to companies just because they donated to campaigns.”

But biased is precisely the perception now attached to the Comelec’s decision to award this critical deal to a company owned by a close associate of the President. The F2 Logistics contract does not make the poll body appear neutral or nonpartisan; on the contrary, what it does is to highlight how the Comelec frustratingly squandered the chance to be like Caesar’s wife, as it were—beyond reproach and above suspicion, embodying at the minimum unassailable probity and fairness as the designated referee overseeing the exercise of elections.Considering the particular gravity of the May 2022 polls, the Comelec could have done the fundamental due diligence of ensuring that all the processes and entities involved would be free of even the faintest whiff of conflict of interest, to spare the one job it’s tasked to do under the Constitution any taint of irregularity or doubt.

Now, having forged ahead despite widespread criticism of its choice for a logistics partner, the Comelec must assuage public worry by rigorously and transparently ensuring that every stage of the deal is reviewed, monitored, and deemed compliant with all laws and procedures. It must hold F2 Logistics to the strictest protocols, with no grounds or excuses to delay the delivery of election materials and supplies, and no untoward incidents that could put the integrity of these materials into question. This heightened vigilance is especially needed in remote areas where problems of technology, electricity, and access may render election results vulnerable to manipulation and cheating.

In May 2022, the Comelec cannot afford the slightest hitch or glitch in its operations; neither, and to a higher degree, can the country.