Too early to worry 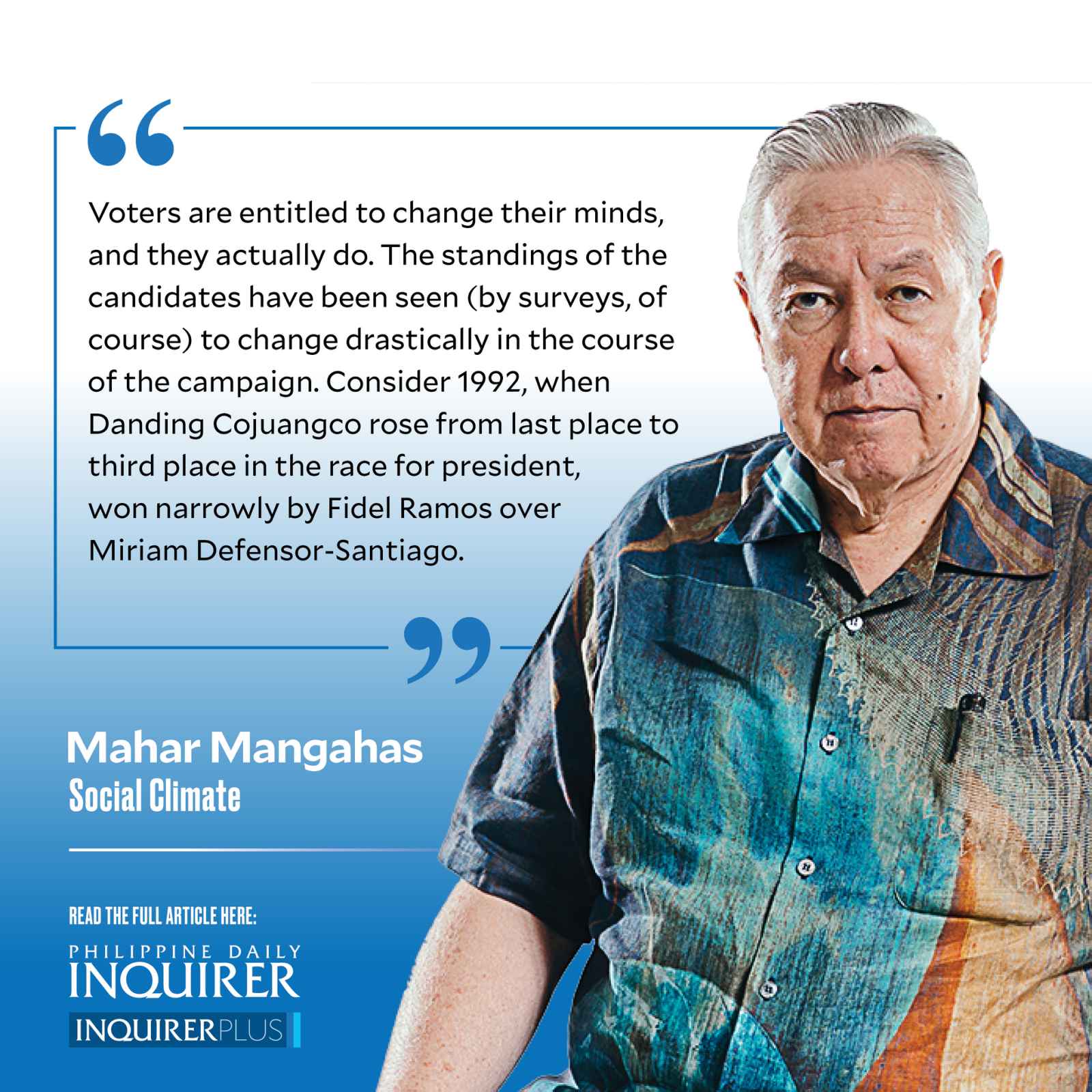 It’s still October. The national contestants for the May 2022 election aren’t firmed up. At this point, the candidate preference results of surveys are all hypothetical.

Even when the lists of contestants get fully set out, it will take time for the voters to make their final choices. Going by what the respondents in our May 2010 exit poll told us, I expect half of the voters to make up their minds by next February, one-fourth to decide in March and April, and one-fourth to decide in May itself (see my “Surveys of elections past,” inquirer.net, 1/23/16).

Opinion polling stays relevant, of course. The political parties/groupings may be using the findings—the people’s feelings not only about personalities but also about ground issues—to help decide their final line-ups and to craft their campaign platforms.

Pollsters’ track records are made after the election is over. They are not made during the campaign period itself; much less are they made before the campaign has even begun. Election surveys are historically important for the social sciences, ever since they began predicting election winners in the 1930s in the United States, thus proving: (1) that people can answer survey questions truthfully; and (2) that random sampling-based statistics work.

It’s up to the newbies in election surveys, especially those fond of online techniques, to likewise successfully predict the May 2022 election outcome, thus demonstrating that their databases are statistically representative, and that their respondents answer the survey questions truthfully.

Voters are entitled to change their minds, and they actually do. The standings of the candidates have been seen (by surveys, of course) to change drastically in the course of the campaign. Consider 1992, when Danding Cojuangco rose from last place to third place in the race for president, won narrowly by Fidel Ramos over Miriam Defensor-Santiago. Consider the 2010 race for VP, when Jejomar Binay, starting in third place, overtook the leader Mar Roxas in the homestretch.

To have a good chance of predicting successfully, a pollster must plan to be in the field not later than 30 days, and preferably not later than 15 days, before election day. This means not using up all of one’s survey funds too soon, but saving enough for a final shot, say in the first week of May. This final pre-election survey becomes the pollster’s prediction.

Remember that publishing a pre-election survey, at any time, is protected by the constitutional guarantee of free expression. The Fair Election Act of 2001 (Republic Act 9006) attempted to hamper free expression, through its Section 5.4, which would have banned such publication 15 days before a national election and seven days before a local election. Fortunately, this Section 5.4 was quickly nullified for violating freedom of expression by the Supreme Court, even before it could be applied to a single election (Social Weather Stations v Comelec, G.R. No. 147571, May 5, 2001).

The ruling’s ponente, Justice Vicente V. Mendoza, wrote: “To sustain the ban on survey results would sanction the censorship of all speaking by candidates in an election on the ground that the usual bombasts and hyperbolic claims made during the campaign can confuse the voters and thus debase the voting process.” This milestone Supreme Court ruling was acclaimed by the World Association for Public Opinion Research, which battles for survey freedom in all countries.