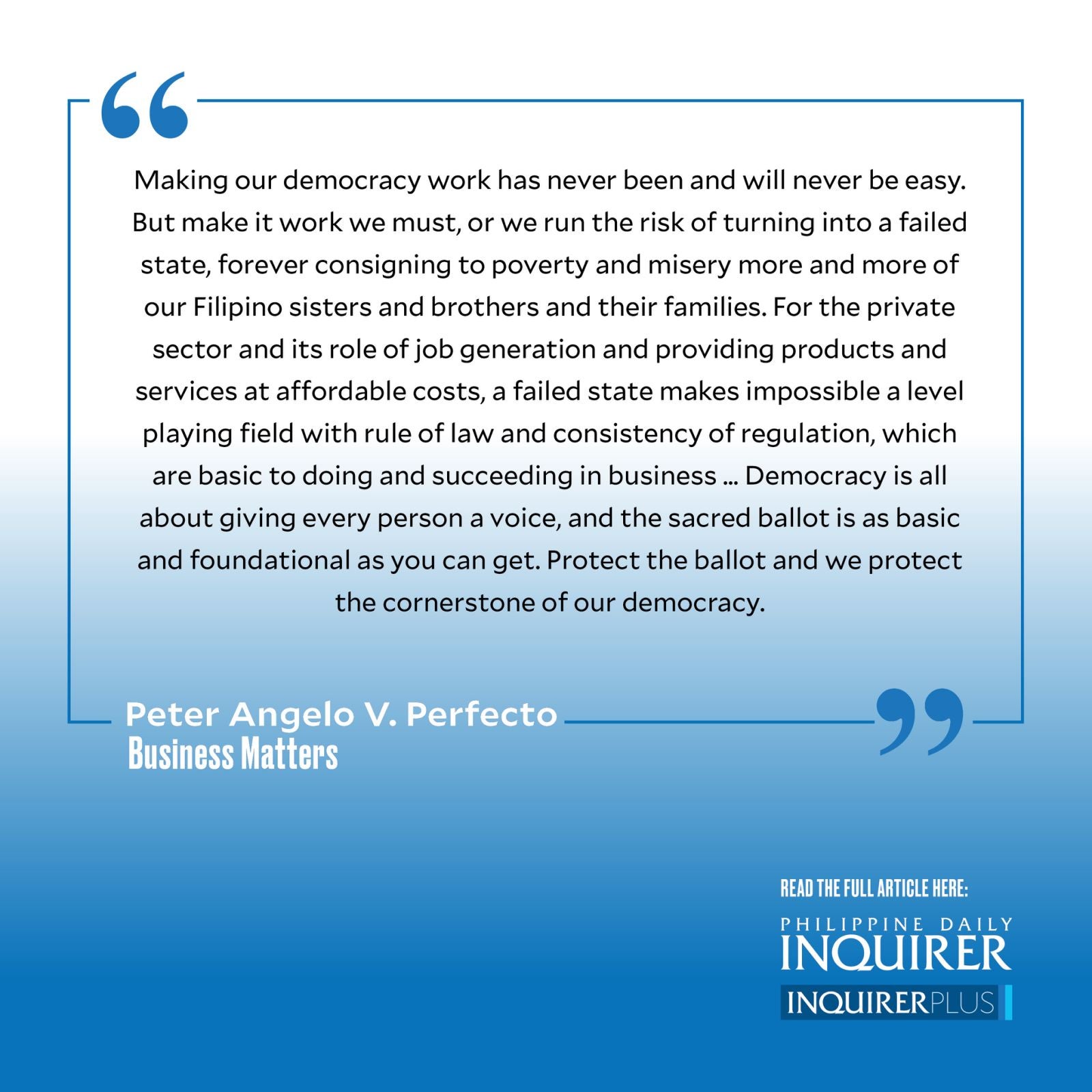 Making our democracy work has never been and will never be easy. But make it work we must, or we run the risk of turning into a failed state, forever consigning to poverty and misery more and more of our Filipino sisters and brothers and their families. For the private sector and its role of job generation and providing products and services at affordable costs, a failed state makes impossible a level playing field with rule of law and consistency of regulation, which are basic to doing and succeeding in business.

In my last contribution to this Business Matters column, I challenged the investing and income-generating community to play a role in sustained voters’ education programs so that servant leaders can be elected into office. In this one, allow me to make a case for the need to support citizen election arms that are critical in ensuring and protecting the integrity of our election process. Democracy is all about giving every person a voice, and the sacred ballot is as basic and foundational as you can get. Protect the ballot and we protect the cornerstone of our democracy.

Allow me to zero in on the National Citizens’ Movement for Free Elections, or Namfrel for short. Many may remember Namfrel for its role in exposing the irregularities of the 1986 snap elections that further inflamed the determination of our people to dismantle the 21-year rule of then-President Marcos. In a 2010 statement by the Makati Business Club, it recognized the key role of Namfrel: “Since 1984, Namfrel has distinguished itself as a non-partisan, ecumenical organization of volunteers committed to the sanctity of the ballot… Namfrel volunteers watched over voting, counting, and canvassing. Their quick counts delivered timely results to the people, giving credibility to the democratic process. Namfrel has even become a model and an invited participant or adviser for election monitoring in over 32 countries.”

That distinguished role continued to be played by Namfrel even as it was forced to decide to step back from the last midterm elections, citing the Comelec’s refusal to allow an open election data website.

Having talked and met recently with Namfrel’s secretary general Eric Alvia, I understand that Namfrel intends to get back fully into the election process, as an active member of the Comelec Advisory Council together with the Parish Pastoral Council for Responsible Voting (or PPCRV, which I hope to write about next).

There are many critical moving parts in our election process. One that is ongoing is the voter registration, and I join Bill Luz and his recent call in this corner for first-time and deactivated voters to register. You have until Oct. 30!

Namfrel is monitoring our automated elections systems, including all the preparations like election simulations and the review of the ever-controversial source code. Its role as guardian of the sanctity of the ballot will ensure that the mandated random manual audit happens, along with the push for an open election data portal where everyone can access information about all candidates, among other things, and the parallel vote tabulation based on election returns collected on the precinct level. As you can imagine, this will require huge human and financial resources.

Eric explained to me that they will mobilize over 100,000 volunteers who will need transportation, mobile load, and food allowances. Their role in the random manual audit will require them to watch over the audits of 750 precincts, randomly selected from across the country on election day itself, out of the estimated 103,000 to 105,000 precincts that shall be set up. All in all, the costs are expected to be in the tens of millions of pesos.

For a citizen’s arm to do this, it will need the support of the entire business community over and above the usual grants and retail solicitations. I propose that some corporate foundations come together and do a joint crowdfunding initiative to ask 10 million Filipinos to donate P10 each, the fund to be split equally between Namfrel and PPCRV.