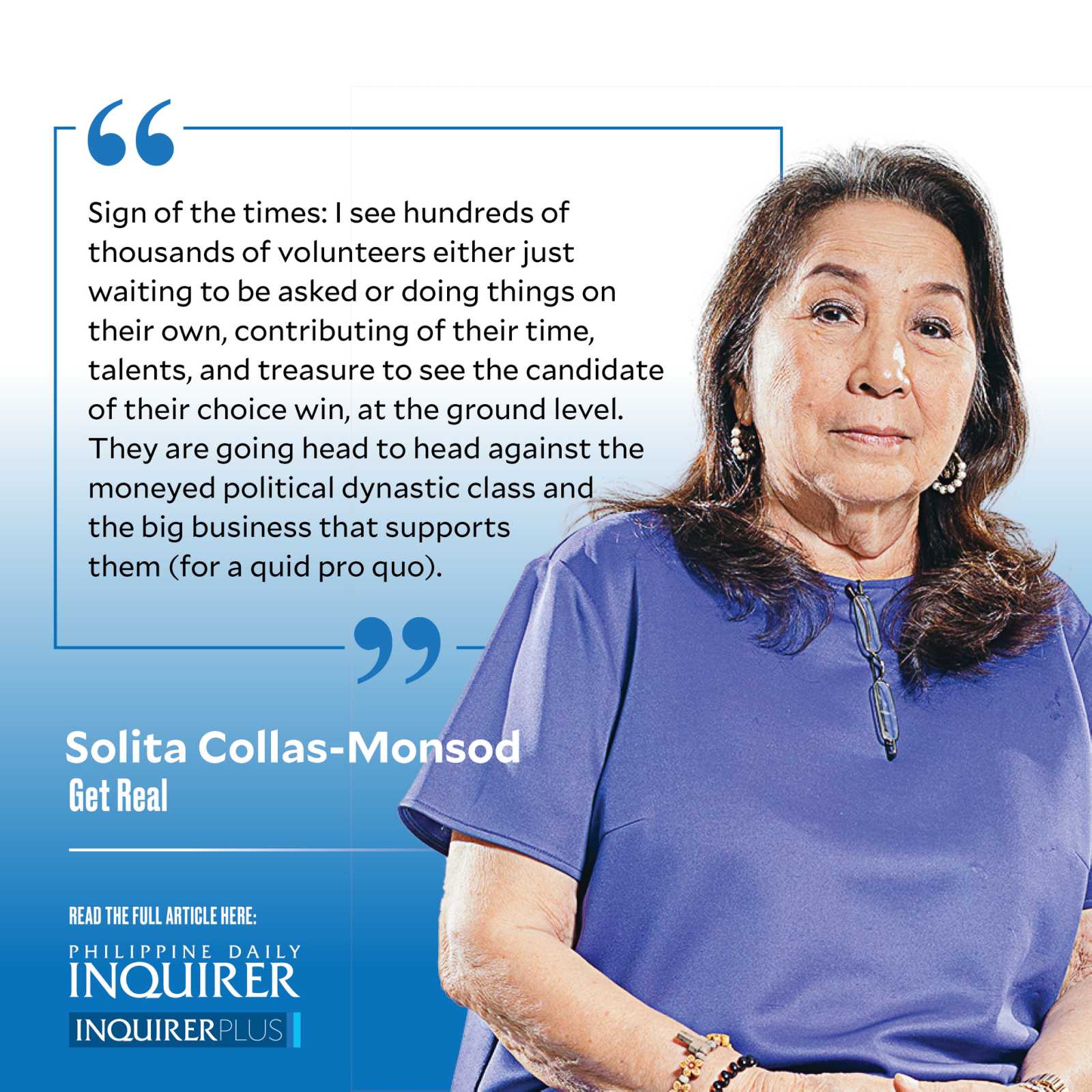 Reader, my fearless forecast: Leni Robredo will be our next President.

On what do I base this positive assertion?

I base it on “signs of the times,” the subject of Fr. Tito Caluag’s homily yesterday, where Jesus was decrying the Pharisees and Sadducees for not being able to read them. Let me share with you the signs of the present time for the Vice President’s victory:

First and foremost, there are the volunteers that she is attracting to her campaign from all walks of life, and of all ages—that’s the key—rolling up their sleeves, and this early in the game, committing their time, talent, and treasure to help get her elected. I was told there are over 200 volunteer organizations—some existing even before she indicated that she was running, so convinced they were that she is the best candidate. But I doubt that Leni is the sole motivation for their efforts. Beyond her, I think, they are doing it for the country.

But to get into some specifics, meet Anna Blanco, a recently retired district manager for an insurance company. She is an admirer of Leni, and although she has never met her, was convinced that Leni had the ability and the grit to lead the country out of this darkness (not her words).

So, with time on her hands, and her talents ready, she reached out, through Facebook, to her friends to join her in her project: Seguristas (Insurers) for Leni. This was sometime around August, when some candidates for President had already presented themselves to the public.

In a couple of weeks, she had 1,000 volunteers. I read into that a sign that not only was the country waiting for Leni, but also that it was not particularly satisfied with the candidates that were presenting themselves.

Another example: Amor Baldovino, who joined Katipuneras for Leni—whose members are anyone who attended Maryknoll, now Miriam, College. They’ve got maybe 1,000 members, and any project supportive of Leni is okay. When Leni threw her hat into the ring, Amor, in a couple of days, raised enough funds from her former classmates to buy 10,000 pink masks—and not the cheap ones, either, she says, because these are for those with less in life, so let’s give them the best. Which is exactly what Leni would want.

Yet a third example, this time all the way from Hinunangan, a little town in Southern Leyte. A group of young townspeople, following Leni’s favorite activity of helping others, put up a lugawan—small at first, for their less fortunate townmates. The response was so good that they are now doing it on a weekly basis, with a subgroup undertaking to finance the lugawan each time. Nobody told them to do it. And it is catching on. All for Leni.

And my niece, Mayang Pascual, volunteered because she received a text from a friend asking her to join DiWa Volunteers for Leni. DiWa for Digital Warriors. She accepted, turned around, and asked her other friends to join, and now they are busy helping counteract troll farms and ensuring Leni’s social media presence. DiWa has over 8,000 volunteers, and counting.

And the campaign period has not even started yet.

Sign of the times: I see hundreds of thousands of volunteers either just waiting to be asked or doing things on their own, contributing of their time, talents, and treasure to see the candidate of their choice win, at the ground level. They are going head to head against the moneyed political dynastic class and the big business that supports them (for a quid pro quo).

Most importantly, I see that this is happening, with great spontaneity, only in Leni’s case. And that is why she will win. The other candidates, with their questionable values and financing, don’t stand a chance against her.