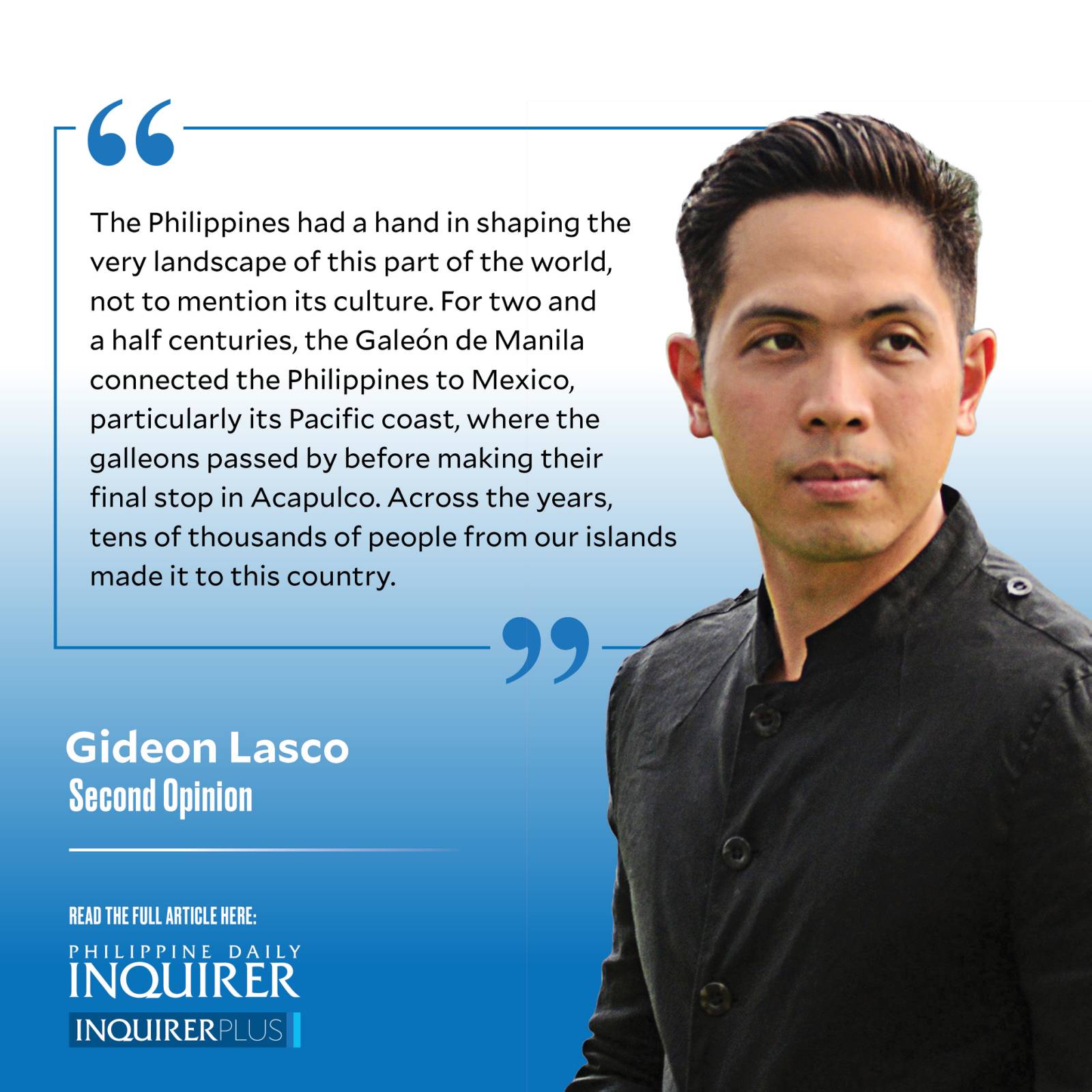 Colima, Mexico — Here in Colima, a state of Mexico on its Pacific coast roughly the size of Camarines Sur, one can easily be led to believe that you were somewhere in the Philippines: The landscape is strewn with coconuts, and there are mountains, beaches, and picturesque towns with colonial-era cathedrals and plazas. From the city that bears its name, Volcán de Colima looms at a distance, majestic as Mayon. Beer and tuba are popular drinks amid a climate that is warm and humid just like back home.

The familiarity is not coincidental. The Philippines had a hand in shaping the very landscape of this part of the world, not to mention its culture. For two and a half centuries, the Galeón de Manila connected the Philippines to Mexico, particularly its Pacific coast, where the galleons passed by before making their final stop in Acapulco. Across the years, tens of thousands of people from our islands made it to this country, including as part of the little-known trans-Pacific slave trade that the historian Tatiana Seijas (2014) has meticulously documented. Recent scholarship has unearthed the life stories of these “OFWs”: For instance, Rubén Carrillo Martín (2015) begins his dissertation with the story of Alonso Cortés de Siles, who left Cebu in 1683 and ended up as a barber in Mexico City.

This is likely the reason why, according to recent genetic studies, there’s significant Asian ancestry in some parts of Mexico, especially along the route of the galleon. For instance, in the coastal state of Guerrero (where Acapulco is located), a study by Mexican researchers found that a third of the population had up to 10 percent of their genomes related to those found in the Philippines and Indonesia. Curiously, Maganda is not an uncommon surname here; unlike most Filipinos in the Philippines whose surnames were imposed by a Spanish decree in 1849, at least some Filipinos in Mexico must have gotten to choose theirs, and consequently chose beautiful words in our language.

Such is the Filipino influence that the technology to distill tuba is now widely acknowledged by scholars, most recently Paulina Machuca’s excellent “El vino de cocos en la Nueva España” (2018), as the same technology that spread across Mexico to give rise to all sorts of liquors like tequila and mezcal. In the realm of architecture, meanwhile, huts made from coconut fronds continue to be called palapa and look exactly the same as the ones that can be found all over our archipelago.

Despite these significant historical ties, the Philippines hardly figures in Mexican culture today, save for the fact their best mangoes—very similar if not the same as our kinalabaw—are called “Mango Manila.” Beyond academic circles, the role of the Philippines in the origin of tequila, mezcal, and even of tuba is hardly known. When I tell people I’m Filipino, it is Manny Pacquiao that comes to their mind. (“Bueno para deportes, pero malo para la política,” I tell them).

Similarly, Mexico hardly figures in our narratives of colonization, or in our history textbooks. It is barely taught that as part of the Viceroyalty of New Spain, we were actually governed from Mexico City for hundreds of years. While contemporary historians no longer romanticize Spain, the fact that the colonial encounter was in fact a multipolar one remains underemphasized, or not mentioned at all. Most Filipinos know tequila, but very few know that the technique to make it actually originated from our country. And for all its culinary, cultural, and natural wonders (35 World Heritage Sites!), Mexico is not high on Filipinos’ list of places to visit.

Beyond the sheer distance, there are many reasons for these lost linkages, including the colonial legacy itself in which we saw ourselves solely in relation to the colonizer-others (e.g., Spain and then the US); our countries’ different trajectories since 1821, when Mexico declared independence (and some of its leaders actually thought of liberating the Philippines along); and the language barrier, especially during and after the American period—even today most of the relevant literature is written in Spanish, and of course so were the primary texts. What could have been if Jose Rizal—who had volunteered to serve as a physician in Cuba before his arrest—made it to this part of the world?

Fortunately, there have been recent attempts to reestablish ties with Mexico from both sides of the Pacific. In my next column, I will review these initiatives and offer some recommendations on how we can build on these efforts.