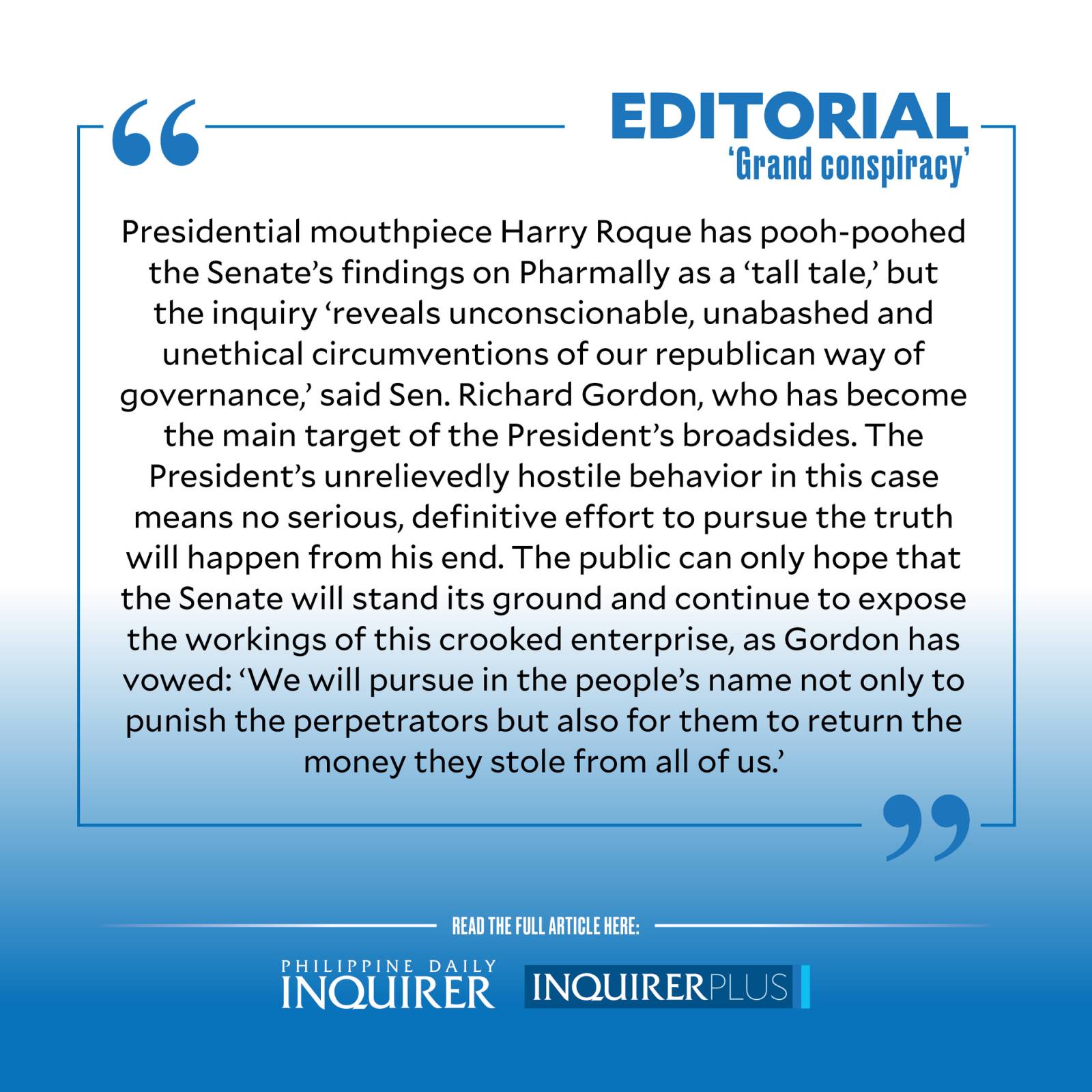 The Senate blue ribbon committee has released its preliminary report on the Pharmally scandal that appears to have involved billions of pesos of fraudulent government transactions while the country was battling the COVID-19 pandemic, and the report’s conclusions are more than damning. There was a “grand conspiracy” surrounding the deal, said Sen. Richard Gordon, chair of the committee, and the involvement goes all the way up to President Duterte.

“It is clear and categorical to us that this grand conspiracy could never have happened without the imprimatur of the President,” declared Gordon. It was the President “who allowed his friends to bleed this nation’s coffers dry.”

That “bleeding” was to the tune of some P11.5 billion in contracts in 2020 and 2021 that Pharmally, a newly-formed company capitalized at only P625,000, managed to bag from the Duterte administration for the supply of personal protective equipment, face masks and shields, and COVID-19 test kits, among others. It was the Commission of Audit that had first raised red flags about these transactions, but the true breadth and extent of the irregularities—from nonexistent office addresses and missing or spurious documentation to tampering with supply expiry dates and conflicting testimony by company officials—were bared when the Senate proceeded to scrutinize the nature of the deals made between the Department of Health by way of the Procurement Service of the Department of Budget and Management (PS-DBM) and Pharmally Pharmaceutical Corp., a Chinese company whose owners were introduced to Mr. Duterte by the President’s former “economic adviser,” Michael Yang. The Senate’s assessment of the deals? They “were grossly and manifestly disadvantageous to the government.”

That much the public knows by now, and if there was any doubt that the President was somehow linked to this affair, or was invested in some way in the outcome of the controversy, that was quickly dispelled long ago when Mr. Duterte began using his weekly TV addresses to the public not to talk about the COVID-19 pandemic—which has sickened more than 2 million of his countrymen and killed over 40,000 while also devastating the economy and driving millions more to despair and poverty—but to strenuously defend Yang and the executives of Pharmally from the Senate probe. Previous to this, the President had been taking to the airwaves barely more than once a week, usually at the ungodly hours of late Monday night or early Tuesday morning, in already taped and heavily edited broadcasts at that. But the Pharmally revelations appeared to have goosed the President into vociferous action; suddenly he was making twice-a-week appearances on TV, not only to take up the cudgels for Pharmally but, more ominously, to rail and hurl threats at the Senate for its temerity to look into the transactions and backgrounds of private individuals previously seen in Mr. Duterte’s company whose business was now awash in billions of payments from the government.

The President’s astonishing browbeating of a co-equal branch of government appears to have backfired; senators have by and large pushed back at the naked attempt to shut down the investigation and prematurely exonerate Yang and the Pharmally executives. Various sectors, from the country’s organization of lawyers to top business groups and an unprecedented gathering of health experts and leaders, have also denounced the President’s unbridled meddling in efforts to get to the bottom of what the public suspects might be an abominable case of plunder amid great suffering by the people. The latest such statement, from a group that includes former senator Rene Saguisag, former vice president Jejomar Binay, former solicitor general Florin Hilbay, and former legislators Neri Colmenares, Erin Tañada, and Teddy Casiño, expressed the widespread outrage “that the funds intended to strengthen the country’s COVID-19 response appear to have been given to favored officials and companies.”

Presidential mouthpiece Harry Roque has pooh-poohed the Senate’s findings as a “tall tale,” but the inquiry “reveals unconscionable, unabashed, and unethical circumventions of our republican way of governance,” said Gordon, who has become the main target of the President’s broadsides. “We found that those involved prioritized their profits, commissions or kickbacks, instead of coming up with the right way to quell the pandemic.”

The President’s unrelievedly hostile behavior in this case means no serious, definitive effort to pursue the truth will happen from his end. The public can only hope that the Senate will stand its ground and continue to expose the workings of this crooked enterprise, as Gordon has vowed: “We will pursue in the people’s name not only to punish the perpetrators but also for them to return the money they stole from all of us.”