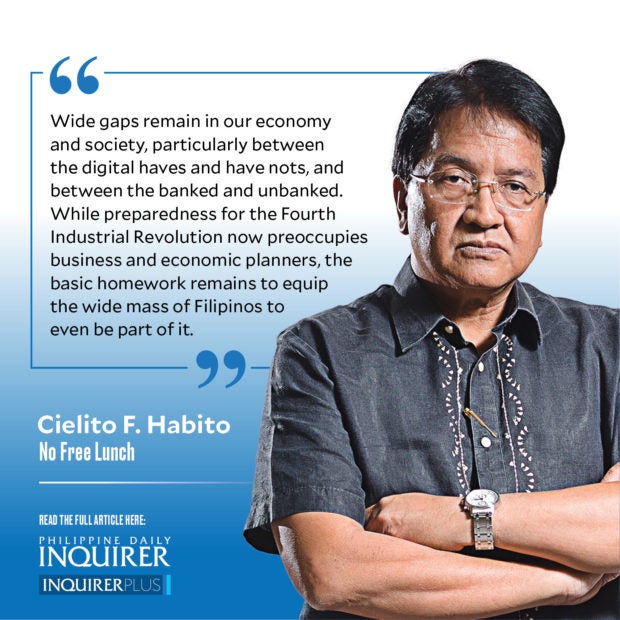 I recently wrote of good news on how more inclusive our economy has become. But wide gaps remain in our economy and society, particularly between the digital haves and have nots, and between the banked and unbanked. This reality hit home after I recently read two documents: the Philippine Institute for Development Studies’ (PIDS) “Bridging the digital infrastructure gap: Policy options for connecting Filipinos” by Mary Grace Mirandilla-Santos, and the Bangko Sentral ng Pilipinas (BSP) report on the 2019 Financial Inclusion Survey. Both report sobering facts that point us to concrete homework urgently needed if we are to gear up the nation for the future, and ensure that disadvantaged Filipinos don’t get left even further behind.

The first takes stock of the so-called digital divide in our country, or the wide disparity between those of us who call ourselves “netizens,” and those who have yet to see how the internet can make their lives easier and better. Citing data from the National ICT Household Survey, the PIDS study finds that on average, only one in four Filipino households owns a computer. Of the three not having one, half do not use computers at all, while 36 percent access them through computer shops, and 11 percent in school or at work. Nationwide, about half (47 percent) of Filipinos use the internet, with the bulk connecting through a mobile device (smartphone or tablet), but internet use is skewed toward urban areas (57 percent) and Metro Manila (66 percent). Less than one in five (18 percent) households has an internet connection, and this is where the digital divide is starkest: In Metro Manila, one in three households (33 percent) is connected, but in Muslim Mindanao, it’s only one in 25 (4 percent). On average, Filipino households spend P1,281 per month on their internet connection. The Vietnamese spend only half of that ($12.40), according to cross-country data compiled by cable.com.uk.

The BSP survey found that less than one in three (29 percent) Filipino adults holds a formal financial account, whether with a bank (12.2 percent), microfinance NGO (12.1 percent), e-money account (8 percent), co-op (1.7 percent), or savings and loan association (0.1 percent). The survey, conducted every two years, found that e-money accounts zoomed from 1.7 percent in 2017 to 8 percent in 2019, while percentages for bank and microfinance accounts changed only slightly, and even fell for co-ops and SLAs. Account ownership was highest (43 percent) for the top socioeconomic group, nearly twice that for the lowest group (27 percent).

The BSP also found that only one in 10 adults use their mobile phones and the internet for financial transactions, even as 69 percent have a mobile phone, of which 3 out of 4 are internet-capable smartphones. Their survey found 53 percent of adults using the internet, with 89 percent accessing it through mobile data, but only 9 percent of those with internet access use it for financial transactions. All told, 51.2 million or 71 percent of adult Filipinos still remain unbanked and live on purely cash transactions. Almost half of them cited lack of enough money as reason for not having an account, followed by no perceived need for an account, and lack of documentary requirements, each accounting for one-fourth of the unbanked.

The two studies clearly showed how far Filipinos still are from reaping the benefits of the rapidly advancing digital age. While preparedness for the Fourth Industrial Revolution now preoccupies business and economic planners, the basic homework remains to equip the wide mass of Filipinos to even be part of it. PIDS notes the urgent need to remove regulatory barriers and expand market opportunities to allow ICT players to invest, build, and innovate, regardless of size, ownership, and technology—and not limit network-building to enfranchised telecom firms. BSP also stresses financial education, digital literacy, and consumer protection as vital to financial inclusion.

The work ahead is daunting, but critical and urgent if we are to bridge the great divide not only within our country, but also between our country and the rest of the rapidly digitalizing world.