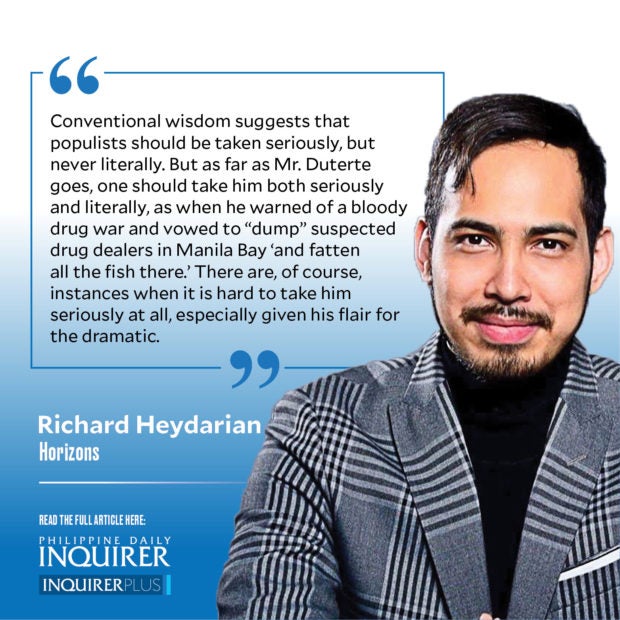 Last week, I had the pleasure of moderating a panel on the West Philippine Sea disputes titled “South China Sea: Stronger Together Through Multilateralism.” The event was organized by the Center for Liberalism and Democracy, among the few yet important civil society groups that have been sincerely and actively promoting liberal values against the rising tide of authoritarian populism in the Philippines and beyond.

We all know Justice Carpio and his patriotic struggle for our sovereign rights in the West Philippine Sea, so let me tell you a bit about Susi. She is a self-described “nasty” and “little bit of nut case” stateswoman who decided to blow up vessels from places such as China that were being used by illegal fishermen to gobble up precious marine resources in her country’s territory.

Within years of her blow-up-the-illegal-vessels policy, Indonesia’s fishing stock doubled, while up to 10,000 foreign fishing boats poaching in Indonesia waters disappeared. Her former boss, President Joko Widodo, showed similar steely resolve last year when he deployed fighter jets and vowed “no compromise” with Beijing in the North Natuna Sea, which has been the site of growing Chinese incursions throughout the past decade.

Another Indonesian speaker, Rafendi Djamin, a human rights activist, proudly reminded everyone that his country is the most democratic nation in Southeast Asia.

Throughout the event, I felt the need to remind the speakers and participants to not count out the Philippines just yet, notwithstanding the pro-Beijing sentiments and authoritarian policies of the populist in Malacañang. After all, President Duterte is entering his twilight months in office and, if we were to believe him, he is genuinely considering “retirement” from politics altogether.

It goes without saying that perhaps only fools take populists at their word. The very logic of populism is its appeal to emotions and symbolism at the expense of reason and facts. Conventional wisdom suggests that populists should be taken seriously, but never literally.

But as far as Mr. Duterte goes, one should take him both seriously and literally, as when he warned of a bloody drug war and vowed to “dump” suspected drug dealers in Manila Bay “and fatten all the fish there.” There are, of course, instances when it is hard to take him seriously at all, especially given his flair for the dramatic. This is the same politician that declared his retirement from office six years ago! (“The country does not need me. I find no need for it [the presidency],” he told his legion of supporters as well as the media in a full-capacity room at the Grand Men Seng Hotel in October 2015.)

Back then, he even waxed poetic by stating he would find “comfort in the thought that this is indeed a beautiful day to end a wild dream.” We know what happened next. This is why it’s hard to divine his plans until the 11th hour, or even past it. We won’t know the Duterte game until the mid-November deadline for “substitute” candidates.

Nevertheless, Mr. Duterte, a consummate politician, has read the writing on the wall: Survey after survey makes it increasingly clear that “Peak Duterte” is here. He may still be popular, but his political capital is rapidly dwindling. Since last November, his approval ratings have suffered a double-digit decline. Meanwhile, up to 60 percent of Filipinos, including majority of his fellow Mindanaons, have opposed his plans to run for vice president next year, deeming it a violation of the spirit of the Constitution.

On top of this, Mr. Duterte is now a distant second to Sen. Vicente “Tito” Sotto III in the vice presidential race. And it’s far from sure if his anointed successors can replicate his populist magic: Sara Duterte also saw her numbers significantly declining in the latest Pulse Asia survey of potential presidentiables, making her now statistically tied with a rival or two.

Perhaps there is finally some light at the end of the tunnel. Hopefully, it’s not an incoming train.