In trying to hoodwink those too young to remember, or simply to foist his family’s campaign of revisionism on the nation in the middle of an unprecedented health and economic crisis, Ferdinand “Bongbong’’ Marcos Jr. claimed in a much-derided YouTube interview: “Just think of the things that were being said in ’86, February, March, April. All the things — ‘we discovered this’ — all of them have been proven as lies. But people still insist that it’s shady, fine, that’s your business.”

That this should be said around the 49th anniversary of the declaration of martial law by Marcos Jr.’s father, the deposed dictator Ferdinand Marcos, was outrageous enough. But that the Marcos scion would claim lily-white innocence despite the unprecedented plunder of the nation’s coffers during the Marcos years having been documented, recorded, and repeatedly validated takes the cake.

Just days after that barefaced lie, the Sandiganbayan released a decision that all but rebutted Marcos Jr.’s cocky claim and reiterated the Marcos record of pillage. In a Sept. 24 ruling, the anti-graft court ordered Royal Traders Holding Co. Inc., formerly the Traders Royal Bank (TRB), to pay the government around P367 million plus 12 percent per year from 1993 — money it deemed to be part of the ill-gotten wealth of the former dictator and his family. How were these funds traced back to the Marcoses? Bank certificates attesting to the deposits issued by TRB from 1974 to 1979 were recovered from the crates the Marcoses brought when they fled to Hawaii in 1986. 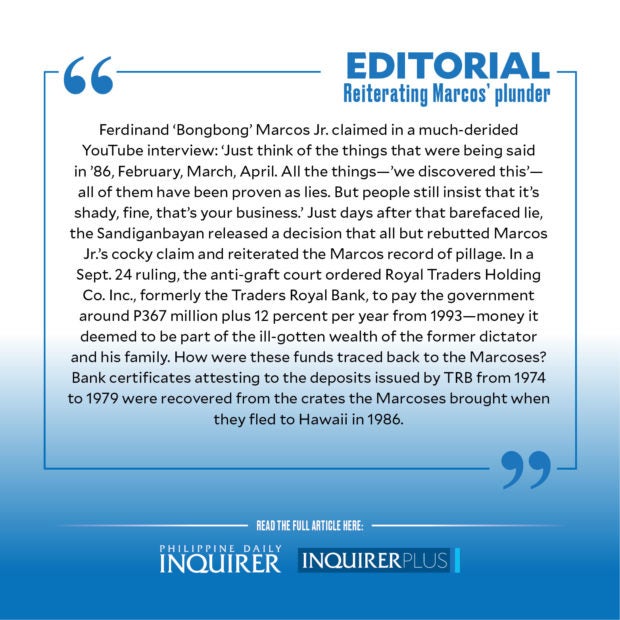 “Mr. Marcos and his family … brought with them numerous crates of boxes, suitcases, bags, etc., containing jewelry, money, documents and other properties,” said the court decision. That declaration affirms well-documented history, with US Customs having painstakingly itemized the hoard the Marcoses hauled with them to exile. Part of the loot even included hard cash: According to historian Ambeth Ocampo, the luggage impounded from a second cargo plane that accompanied the Marcoses carried “22 cardboard boxes of cash — bundles of Philippine banknotes in all denominations (P100, P50, P20, P10 and P5), some in brown paper bags…” The cash alone amounted to $1.2 million.

The Presidential Commission on Good Government, formed to recover the Marcos billions stashed in banks around the world, had been pursuing the TRB case since 1997. Last week, at the House hearing for its 2022 budget, it said that as of end of 2020, the Philippine government had recovered P174.2 billion of Marcos’ ill-gotten wealth, and these funds have bankrolled the agrarian reform program and the coco levy fund, and compensation for the victims of martial law. But as of August 2021, 35 years since Edsa 1, the PCGG is still running after P125.9 billion of the Marcos wealth, comprising 1,856 items of real and personal properties that are still under litigation. These items include land, condominiums, apartments, rest houses, jewelry, paintings, and shares of stock.

Lies, according to Marcos Jr.? Former chief justice Artemio Panganiban and retired senior associate justice Antonio Carpio both have written columns in this paper detailing how the Marcos plunder has been established beyond doubt and officially recognized through several rulings by the country’s highest court.

There was the landmark 2003 unanimous ruling of the Supreme Court which declared that the $658 million in Swiss bank accounts claimed by the entire Marcos family, including Marcos Jr. and his two sisters, was ill-gotten wealth. Citing Republic Act No. 1379 which states that any property manifestly out of proportion to one’s salary as a public official shall be “presumed prima facie to have been unlawfully acquired,” the Supreme Court forfeited the bank accounts in favor of the government. The high court, Carpio wrote, established that Marcos and his wife Imelda’s lawful income amounted to only $304,372.43.

Then there was the Supreme Court decision on the 2012 consolidated cases against Imelda and Marcos Jr. involving the $3.3 million Arelma account. Marcos Jr., as heir of his father, claimed ownership of the account, but the high court again used RA 1379 to rule that the Arelma deposits were part of the unlawfully acquired wealth of Marcos.

“Do the Marcoses have ill-gotten wealth? In many decisions, the Supreme Court answered this question with a clear and unqualified ‘Yes’,” wrote Panganiban.

History and law should lay to rest the well-honed campaign to whitewash and expunge the Marcos record. “Those who seek to revise the historical narrative of the Marcos plunder during martial law will run against a formidable wall of authoritative decisions of the Supreme Court which were rendered after the Marcoses were duly heard,’’ stressed Carpio.

The Sandiganbayan’s TRB ruling adds another brick to Philippine law’s valiant wall of defense against the Marcoses and their partisans’ shameless historical denialism.