Time for women to be put in charge 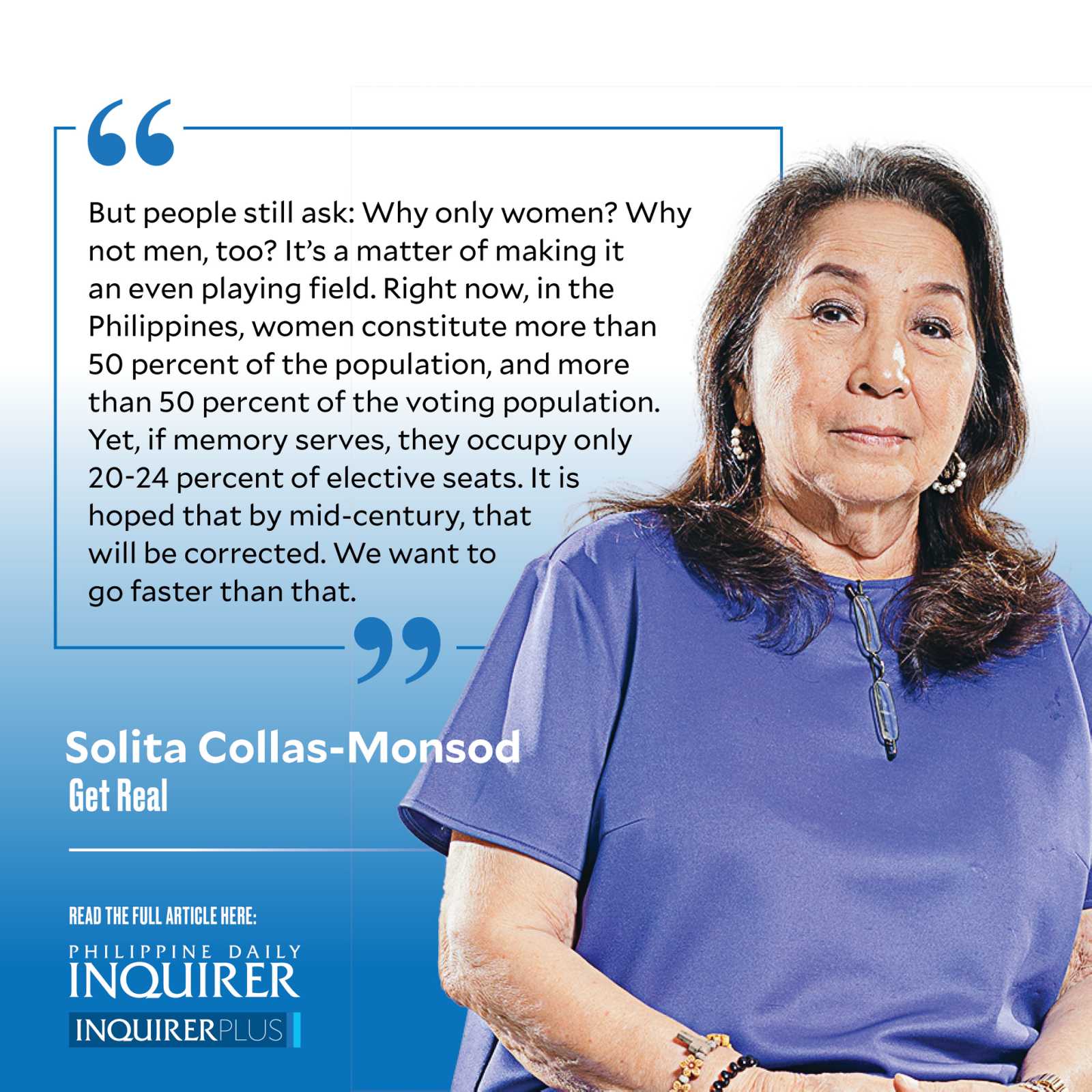 Here’s the latest, Reader, on our crowd-funding project which aims to invest in good women leaders and transform how political leaders are financed. We started the fund (LetWomenLead) by opening a bank account in the BPI last Sept. 20 (BPI 0290-0110-73 under Cecilia Lazaro and Solita Collas-Monsod). Eleven days later, the account stands at P1,985,469.41 (as of 11 a.m., Friday, Oct. 1). This from 532 transactions, with a transaction possibly representing at least one person, but including as much as 18 people. That shows that we have only scratched the surface.

You know, Reader, that AWARE—the Alliance of Women for Action toward Reform—is managing the project, and is currently incorporating itself as an NGO after 39 years of existence. Rina Filart, Olivia Ferry, and Lot Ortiz-Luis have been part of the process of deciding which women to support. They are well-known in the NGO and civil society worlds.

Reader, AWARE could not have gone this far without the help of so many volunteers who, unfortunately, prefer to remain anonymous given the vindictiveness of this government. There are so many stories of harassment by the BIR, the NBI, etc. Cheche and I have been cautioned any number of times, and would have preferred also to remain anonymous, but then, there would have been no bank account to deposit donations into. But to show you how great the threat is, the BDO and the GCash account openings have been suspended.

Don’t worry, though. The website will have a payments gateway—and BDO, GCash, and many more will be part of that gateway. Just a little bit more patience, folks, and then we can all go to town, with the networks forever widening, and the people contributing not only of their financial resources, but of their time and talent as well.

I get the feeling this is going to be like an Edsa people power, but it will not require the physical presence of the people, just their virtual presence, using information and communications technology to get the job done. Remember what that job is: to be able to fund good leaders who will no longer have a taipan or a big corporation to answer to, but the Filipino people who have given of their substance, not of their excess.

But people still ask: Why only women? Why not men, too?

Will the situation get better with more women in power? You bet. I’ve discussed to death the finding that women-led countries did much better at handling the pandemic than men-led countries. That’s a given. But why?

“The evidence shows that female leaders typically have more compassion and empathy, and a more open and inclusive negotiation style. This is not, of course, necessarily true of all women—there are many different leadership styles. That said, modern ideas of transformative leadership are more in line with qualities women generally share: empathy, inclusiveness and an open negotiation style.” This from Gwen K. Young, director of the Women In Public Service Project housed at the Woodrow Wilson International Center for Scholars.

“Yet evidence is strong that as more women are elected, countries experience higher standards of living; the priorities of families, women and minorities are addressed; and confidence in democracy goes up.” This from the National Democratic Institute.

And given that the Philippines is among the bottom feeders when it comes to economic performance and the management of the pandemic (the two are closely related), it is time that women (of the right kind) are put in charge.

Read Next
Selective listening to the people
EDITORS' PICK
Gear up and get ready to play with Yamaha Mio Gear
Senate bill seeks to penalize employers requiring employees to work during rest hours
Marcos-era elections: Not what his son signed up for
If elected VP, Sara Duterte will push for mandatory military service for all Filipinos
Over 3 Million worth of prizes to be won at Smart Padala’s SENDali Manalo Promo!
Acer starts the year off strong with the Aspire Vero National Geographic Edition
MOST READ
‘Sampal sa gobyerno:’ Drilon wants unvaxxed PAO chief barred from working
Bongbong-Sara tandem names 7 candidates in initial senatorial slate
Vice mayor slams Vico Sotto for turning Pasig into a ‘puro palabas’ city
Troy Montero, Aubrey Miles and kids in isolation after testing positive for COVID-19
Don't miss out on the latest news and information.