Selective listening to the people 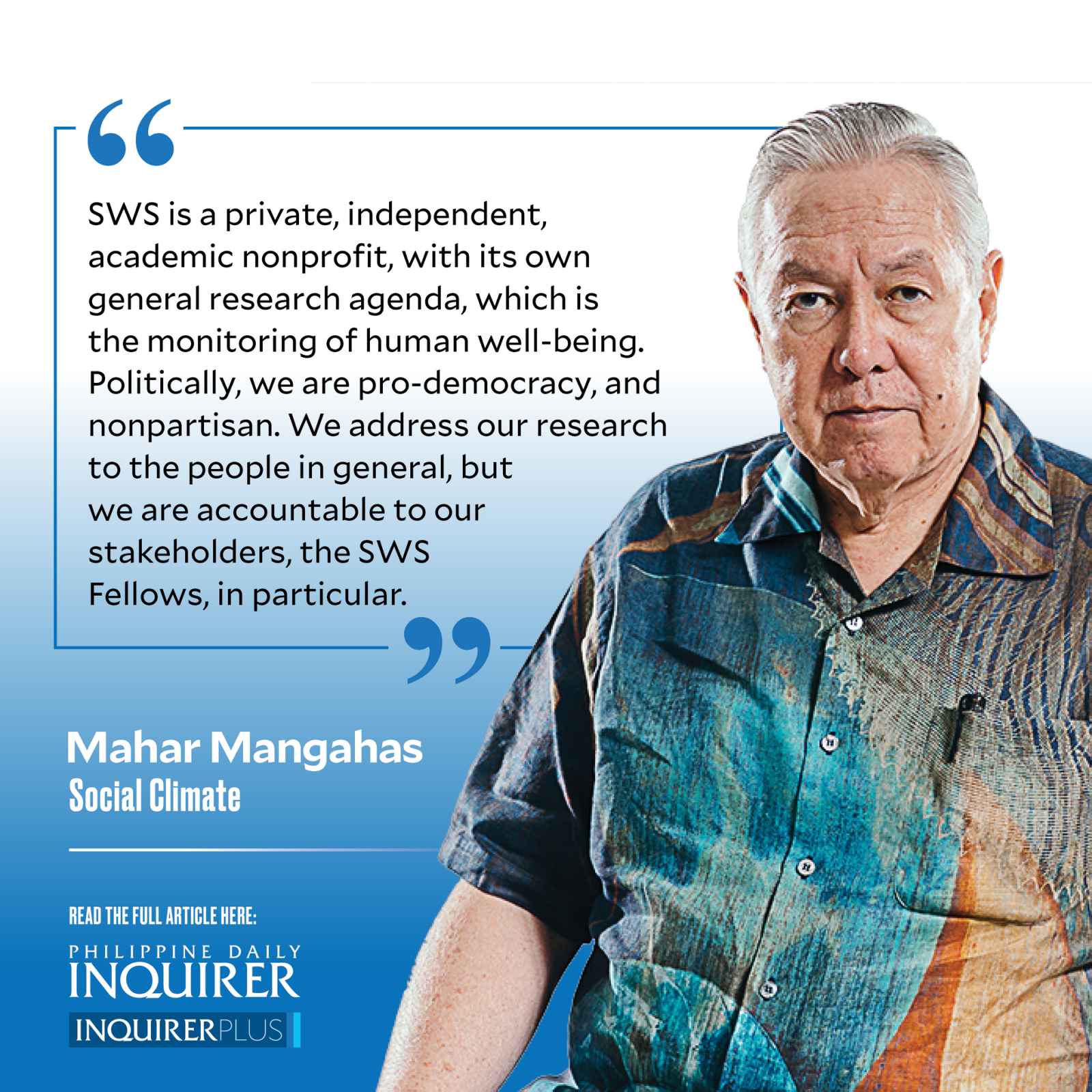 Recently, when people ask me what are “the latest” survey findings, I can easily guess that they are most likely interested only in (a) the popularity rating of the President and/or (b) the prospective 2022 elections, rather than in any other matters. My standard response is to direct them to the Social Weather Stations’ website, www.sws.org.ph, and then let them fend for themselves.

SWS is a private, independent, academic nonprofit, with its own general research agenda, which is the monitoring of human well-being. Politically, we are pro-democracy, and nonpartisan. We address our research to the people in general, but we are accountable to our stakeholders, the SWS Fellows, in particular. We might revisit our past subject matters, but are not obligated to do so.

Governance: the issue of presidential popularity. Last Sept. 23, SWS hosted the webinar, “Identity, policies, perceived character—what factors explain President Duterte’s popularity?” presented by Geoffrey M. Ducanes, Steven A. Rood, and Jorge V. Tigno, all veteran SWS Fellows and board members. The PowerPoint and the recording of the proceedings are on the website.

In the webinar, they analyzed numerous factors, recorded in the 2020-2021 surveys, describing the respondents’ identities (area of residence, gender, age, education, etc.), their assessments of the government’s policies, and their characterizations of the President himself. It pointed out the significant and non-significant factors

Jeff Ducanes, an econometrician, formerly with UP Diliman and now with the Ateneo de Manila economics department, is an Outstanding Young Scientist awardee of the National Academy of Science and Technology. He is SWS Treasurer.

Steve Rood, a political scientist, started with the UP Baguio faculty in 1981, was formerly Asia Foundation country representative in the Philippines, and is now SWS Fellow-in-Residence. He wrote the book “The Philippines: What Everyone Needs to Know” (Oxford University Press, 2019).

Jojie Tigno is professor of political science at UP Diliman, where he was formerly the department chair. He is the current editor in chief of the Philippine Social Sciences Review.

Quality of life: pandemic related research. On Sept. 24, I was one of two invited speakers—the other being fellow academician Michael Tan, medical anthropologist—for a Department of Science and Technology-

My presentation, “The impact of the pandemic on economic well-being of Filipinos,” cited findings from six SWS national surveys, from May 2020 to June 2021, on the Filipino people’s severe fear of infection, their faithful compliance with health protocols, their strong willingness to be vaccinated—as soon as vaccines became available—and their preferences among vaccines.

The SWS surveys also recorded catastrophic and unprecedented shocks to hunger, poverty, joblessness, gainers net of losers in quality of life over the past year, and optimists net of pessimists in quality of life in the coming year. They showed that the scale of human suffering has been highly disproportional to the country’s COVID-19 rates of infection and mortality, and point to a need for a quicker reopening of economic activities.

DOST-SEI tells me that there were 1,798 unique attendees, consisting of students and professionals in science, nationwide, to my talk (for uploading to the website soon)—a gratifying morning’s work!

Democracy: election-related polling. Most recently, SWS issued these reports from its June 2021 survey: “60% of adult Filipinos say it violates the intention of the Constitution if President Duterte runs as Vice-President in 2022; only 39% say he should run” (9/27/21), and “75% of adult Filipinos support the single 6-year term limit for president of the Philippines” (9/29/21).