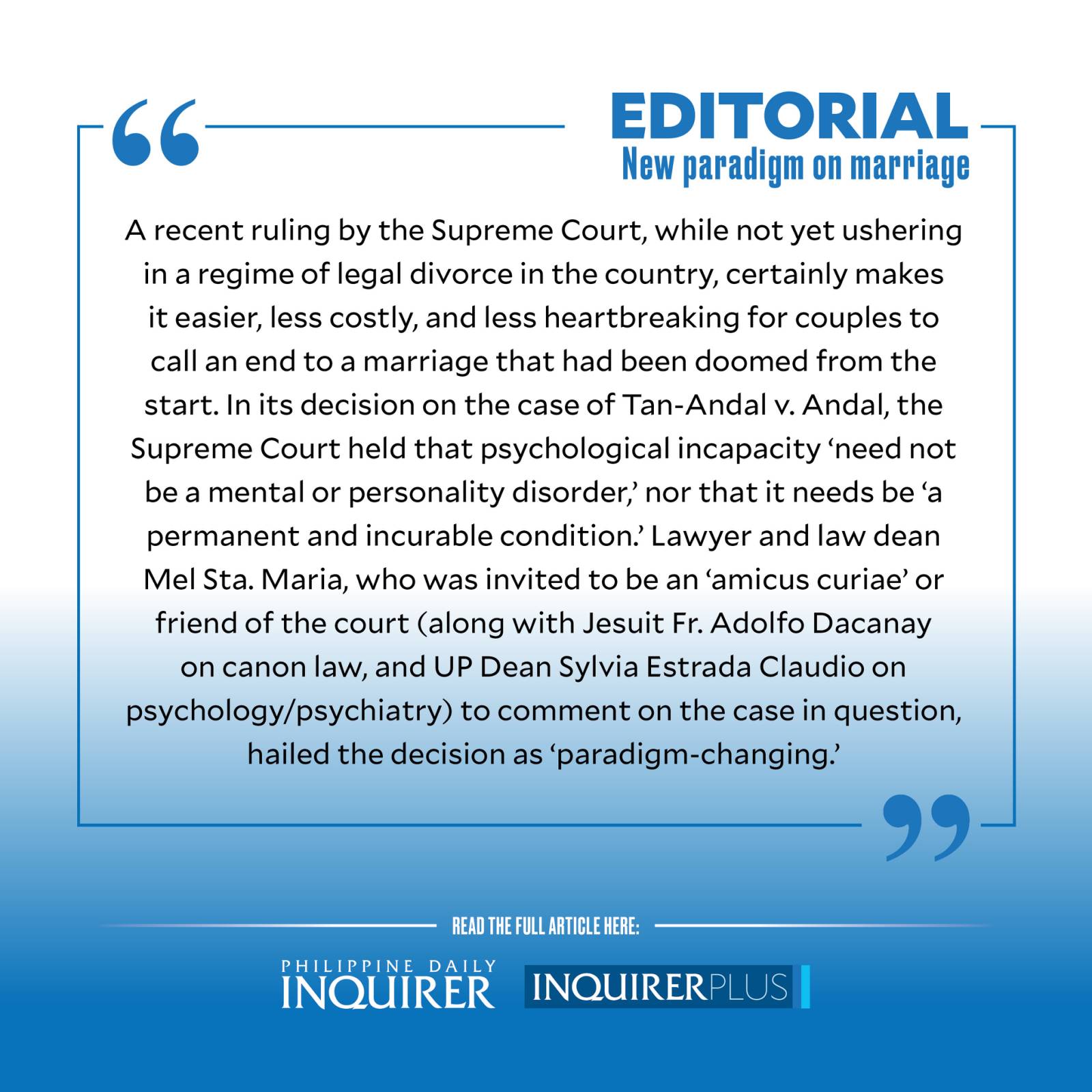 Lost amid the many issues swirling about the nation’s affairs—the COVID-19 pandemic and health and social problems linked to it, the upcoming elections and intrigues and complications that stem from it, the dismaying impact on the economy that is certain to last well beyond the current emergency—are stray bits of good news Filipinos would do well to celebrate.

One of these is the recent ruling from the Supreme Court that, while not yet ushering in a regime of legal divorce in the country, certainly makes it easier, less costly, and less heartbreaking for couples to call an end to a marriage that had been doomed from the start.

Released last month, the ruling declared that the high tribunal had “unanimously” decided to “modify the interpretation of the requirements of psychological incapacity as a ground in nullifying a marriage under Article 36 of the Family Code.”

In its decision on the case of Tan-Andal v. Andal, the Supreme Court held that psychological incapacity “need not be a mental or personality disorder,” nor that it needs be “a permanent and incurable condition.”

So, while previously petitioners for the nullification of a marriage depended on the testimony of a psychologist or psychiatrist to prove psychological incapacity, the high court decision held that this would no longer be necessary. It set aside the longstanding “Molina” guideline in family law that ruled that psychological incapacity must be “medically or clinically identified.” Psychological incapacity “is not a medical but a legal concept,” clarified the ruling written by Supreme Court Associate Justice Marvic Leonen. It’s “a personal condition that prevents a spouse to comply with fundamental marital obligations only in relation to a specific partner that may exist at the time of the marriage but may have revealed through behavior subsequent to the ceremonies.” Thus, “Psychological incapacity is neither a mental incapacity nor a personality disorder that must be proven through expert opinion.”

Such a ruling decisively removes a major barrier against many couples seeking to nullify their marriage. The question of professional fees aside, the need to seek professional intervention requires first, knowing a psychologist or psychiatrist to consult, the time to undergo interviews or counseling, and willingness on the part of both to breach their privacy and discuss their relationship before a stranger.

Noted the Court: “To comply with the second Molina guideline, psychologists and psychiatrists, when serving as expert witnesses, have been forced to assign a personality disorder and pathologize the supposedly psychologically incapacitated spouse. This cruelty could not have been the intent of the Code Committee.”

No wonder, for many couples caught in untenable marriages, the legal steps one needs to follow are often ignored, with a great many resorting to mere separation of bed and board, taking up with new partners, or simply abandoning an existing relationship and even family. Certainly not an environment that encourages respect for the law.

Under the new arrangement, it is up to the judge to gather evidence, even from “ordinary witnesses” who have been present in the life of the spouses before the marriage, to decide if the behaviors complained of are “indicative of a true and serious incapacity to assume the essential obligations.”

Lawyer and law dean Mel Sta. Maria, who was invited to be an “amicus curiae” or friend of the court (along with Jesuit Fr. Adolfo Dacanay on canon law, and UP Dean Sylvia Estrada Claudio on psychology/psychiatry) to comment on the case in question, hailed the decision as “paradigm-changing.” “Family Courts are now given an astounding and liberating decision to make many people happy,” he wrote in a Facebook post. “This decision will make a family court truly a venue where a new lease on life can be given to those stuck in a non-functional, loveless marital life. I just really hope family court judges understand the beauty of this decision.”

But the Supreme Court ruling also makes clear: The new rules don’t mean that divorce will now be legal in the country. This new “paradigm” only makes it easier for a couple to go their separate ways with a minimum of pain and scandal, helped along by a fairer, more compassionate, and more enlightened family law in place. As the Supreme Court put it: “The right to choose our intimate partners is part of our right to autonomy and liberty, an inherent part of human dignity. Ultimately, should the State interfere with these choices, it should do so only when public interest is imperiled.”