LetWomenLead: An idea whose time has come 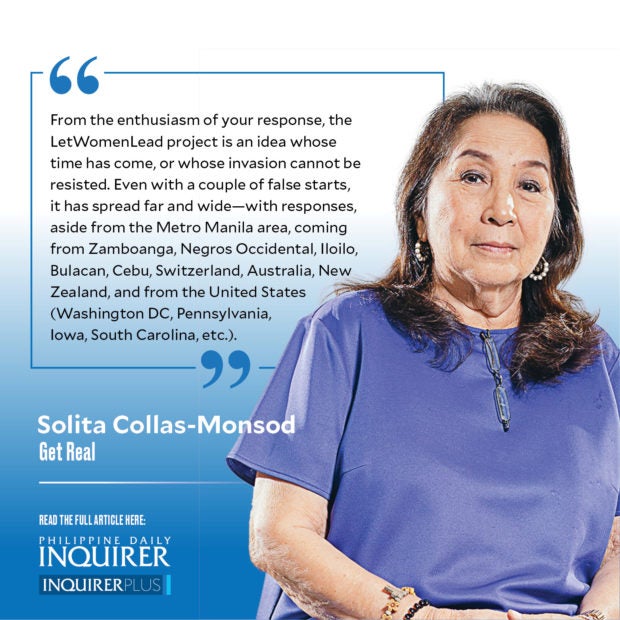 Well, from the enthusiasm of your response, the LetWomenLead project is an idea whose time has come, or whose invasion cannot be resisted. Even with a couple of false starts, it has spread far and wide — with responses, aside from the Metro Manila area, coming from Zamboanga, Negros Occidental, Iloilo, Bulacan, Cebu, Switzerland, Australia, New Zealand, and from the United States (Washington DC, Pennsylvania, Iowa, South Carolina, etc.). And this is only from those who emailed me.

The false starts were because I miscalculated the response to the call. Dinosaur that I was, I thought the column would be read on Saturday, and then people would take note of it and send in their donations on Monday. Not so. I received an email at 5:40 a.m. Saturday, alerting me that the BPI account was not accepting his deposit. (Yes, Virginia, the first responder was a male.) And that was just the beginning. I spent most of the weekend answering similar emails, apologizing for my mistake, telling them to make their deposits starting Monday noon.

But what warmed the cockles of my heart were the expressions of support, of interest, of encouragement, of let’s-give-it-one-last-try-for-our-children-even-if-I’ve-already-lost-hope. There were volunteers, and if not volunteers, there was a quick positive response from those I had asked to help.

It was also very cheering to hear from long-lost friends and acquaintances, or former students and their spouses, keeping me posted about their activities even as they made their donations.

Great concern was expressed about Cheche and I exposing ourselves to a vindictive government, or about the security of the account. Advice was freely given and gratefully accepted. And, of course, there were suspicions: Is this project legit?

What was clear from the get-go was that AWARE (Alliance of Women for Action toward Reform), the organization which accepted my appeal to adopt the LetWomenLead project, had maybe bitten off more than it could chew. But as I have always said, with women the difficult can be done immediately, the impossible will take a little longer.

In the 38 years of its existence, AWARE has never felt the need to register itself as an NGO, or incorporate itself. Now AWARE is doing so (following legal advice). This so we can set up a website (which hopefully will be up by next week), so that everyone interested will know what LetWomenLead is doing, and can follow its progress.

AWARE is also actively looking for members, particularly of the younger generation and millennials. LetWomenLead is not just a one-shot deal, meaning the 2022 elections. It is a permanent project.

Decisions on who the chosen donees are (women first and foremost), and how much they will be given, will be made by a Committee of Independent Women who are right now being vetted. These will all be posted on the website. Transparency is the objective.

Also, the website (the planned name is LetWomenLead.org, because LetWomenLead.com is already taken), will have a payments gateway, so that those who want to use BDO, GCash, PayMaya, etc., will be able to do so. Records will be kept, and Price Waterhouse will do the auditing.

So those of you, Readers, who are clamoring for GCash and BDO and such for ease of donating, please, have a little more patience. With the help of all Filipinos of good will, we will get there. And soon. How’s that for action agad?