With the Philippines still mightily struggling to overcome unprecedented health and economic challenges 18 months into the pandemic, logic dictates that more funds be allocated in the 2022 budget to pressing COVID-19 response programs.

And yet here comes the Presidential Communications Operations Office proposing a P1.91-billion budget next year — 18 percent more than the P1.62 billion it got this year. Its rationale for the humongous budget request? To “continue to highlight the legacy of real change that this administration brought to the Filipino people as we inch closer to the end of the Duterte administration’s term,” said PCOO Secretary Martin Andanar.

Does it really need over a billion pesos to do that, especially with only eight months to go for this administration?

Senate Minority Leader Sen. Franklin Drilon rightly pointed out that the proposed expense items of the PCOO can be pushed back by at least another year so that the funds can be diverted instead to more urgent needs, such as budgetary support for public hospitals and the harried medical frontliners still waiting for rightful compensation. 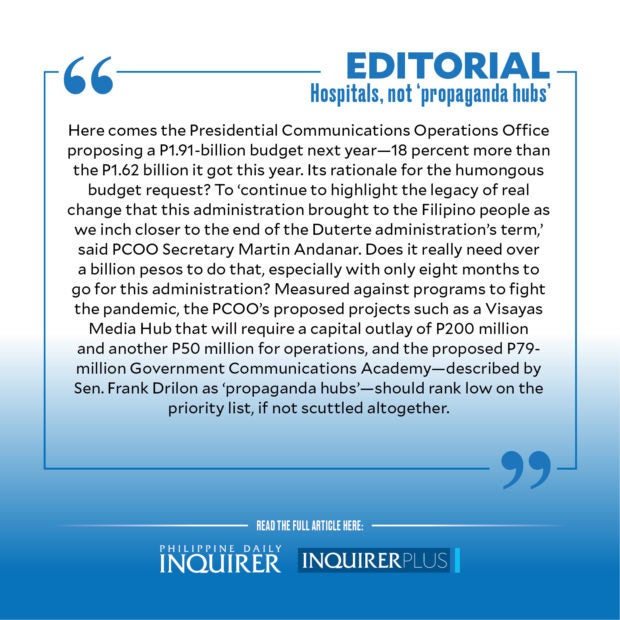 “We have to accept the fact that our resources are very tight,” Drilon stressed during the Sept. 16 hearing on PCOO’s proposed budget, “Every single peso of resources should prioritize COVID.”

Indeed, measured against programs to fight the pandemic, the PCOO’s proposed projects such as a Visayas Media Hub that will require a capital outlay of P200 million and another P50 million for operations, and the proposed P79-million Government Communications Academy—described by Drilon as “propaganda hubs”—should rank low on the priority list, if not scuttled altogether.

“I think a rational assessment would tell you that these are not urgent projects—putting up a building to house an academy for propaganda and having P50 million again as MOOE (maintainance and other operating expenses) for propaganda,” said the senator.

Such projects, she said, should be deferred until the COVID-19 pandemic is under control, in the same way that the P28 billion sought by the National Task Force to End Local Communist Armed Conflict and funds for the constant dolomite replenishment for Manila Bay should be redirected to programs that will directly address the disruptions to the economy and the health care system. “Our people’s lives and health should be given top priority right now over anything else,” Binay added.

Is the PCOO even using the money it already has wisely? Drilon echoed public suspicions that the PCOO, for one, has been funding troll farms; he has demanded to see the records of 1,479 contractual employees employed by the Palace’s communications group, 375 of whom work at the PCOO. These items were flagged recently by the Commission on Audit, which noted that the PCOO’s “massive” and “unrestricted” hiring of 375 contractual workers—a whopping 260 percent more than the number of its regular personnel—cost taxpayers P71 million. The COA also said in its 2020 report that the PCOO has no written policy guidelines on hiring people under “contract of services,” and the requests had not been supported by documents justifying their hiring.

How effective has the government’s lead communications agency been in its job, anyway? Consider just one issue: the vaccine hesitancy among the populace. With the massive resources and sprawling manpower at the PCOO’s disposal to address the lingering fears and anxieties among so many to get the necessary jabs, why is vaccine hesitancy still plaguing efforts to get more Filipinos inoculated?

Might that be because the likes of the PCOO, instead of fulfilling its mandate of “engaging and involving the citizenry and the mass media in order to enrich the quality of public discourse on all matters of governance and build a national consensus thereon,” is primarily in the business these days of buffing up the Duterte administration (and likely its candidates in next year’s elections) by means fair and foul, including the use of a troll army that would require the gargantuan budget it’s asking for at the expense of more urgent national priorities?

They want more funds, said Andanar, to “bring hope to our people that better days are coming for the Philippines.” But at the rate the administration is squandering scarce funds on glaring nonessentials, those better days will remain far off the horizon.