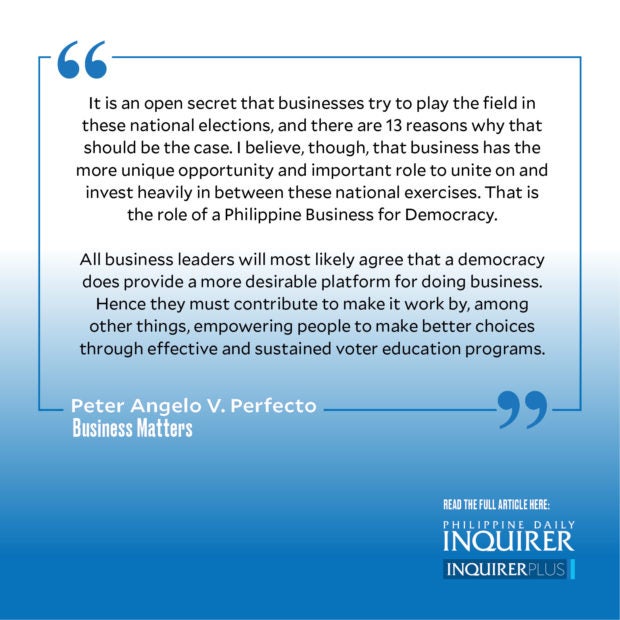 Respected business leader Washington SyCip was never shy to express that the Philippines is not ready for democracy. RJ Ledesma, in an Esquire magazine article, quotes SyCip to have said, “I think when you have a nation where people are still poor, democracy is not necessarily the best form of government.” He also said, “All those countries that have moved ahead had economic freedom ahead of political freedom. Then as the economy went up, income level rose, people didn’t have to sell their votes, democracy started.”

In my 12 years working with Philippine Business for Education (PBEd) and then with Makati Business Club, I have had numerous opportunities to listen to SyCip’s nuggets of wisdom, and I can confirm that he did assess Philippine democracy that way.

But, I stubbornly disagreed with him (at least in my mind), having convinced myself early on that the Filipino did earn his right to transparent and accountable government, freedom of expression and association, and the rule of law — some of the basic foundations of genuine democracy. And it was earned by the blood, sweat, and tears of Filipino heroes who fought the Spanish, the Americans, and the Japanese. Many of our heroes talked of government for and by Filipinos and one respected leader was even quoted to have said he preferred a Philippines run like hell by Filipinos.

You all probably have guessed correctly that these musings of democracy have been sparked by current events related to the deadline for voter registration and the filing of candidacies for the May 2022 national elections. As of this writing, Isko Moreno, Ping Lacson, and Bongbong Marcos have publicly announced they will file their candidacies for president, with Willie Ong, Tito Sotto, and—this I am assuming—President Duterte respectively joining them as VP candidates. Meantime, many await the decision of Vice President Leni Robredo, who has explained that she continues to hope for a unified opposition slate, as well as the final decision of Sara Duterte, who has promised that there will be only one Duterte vying for a national position.

It is an open secret that businesses try to play the field in these national elections, and there are 13 reasons why that should be the case. So I will reserve that discussion for another time. I believe, though, that business has the more unique opportunity and important role to unite on and invest heavily in between these national exercises. That is the role of a Philippine Business for Democracy (PBD).

All business leaders will most likely agree that a democracy does provide a more desirable platform for doing business. Hence they must contribute to make it work by, among other things, empowering people to make better choices through effective and sustained voter education programs. One of our problems is that we always do voter education very close to an election and just focus on the sins of the current administration that needs to be replaced. Voter education must be sustained, must start at the earliest ages possible, and must adapt to messaging and communication strategies that work especially for our larger youth vote.

We can make this work, sustain it, and make it effective by looking at the journey of the Philippine Business for Education and how it has pursued its programs and initiatives for education reform over three administrations now, successfully bridging business, academe, and public sector interests. The key is that PBEd made education reform everyone’s business. We should do no less for a working Philippine democracy. Otherwise, especially with how things are panning out today for the May 2022 elections, we all just surrender to the assessment of SyCip and shelve transparent and accountable government, freedom of expression and association, and the rule of law.

We tried this in the ’70s and have been toying with it again since 2016. The disastrous results are the same, and maybe worse this time, so I say we make the Philippines ready for its democracy, begin with an inclusive PBD, and aim for a democracy run like heaven.