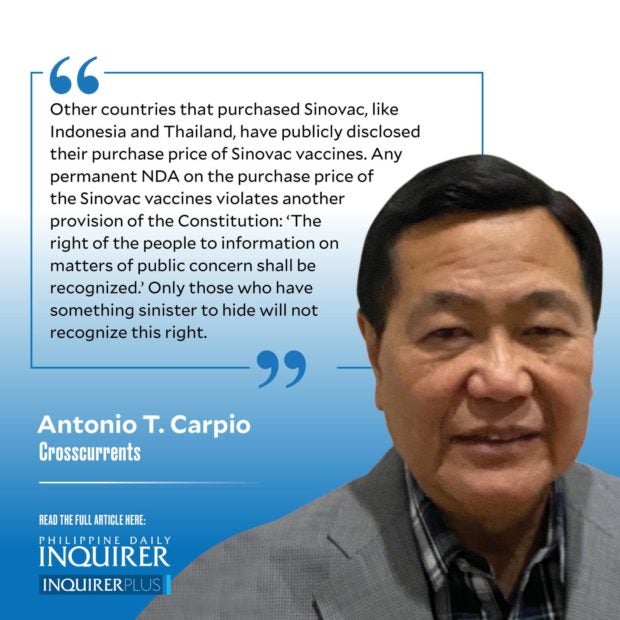 Presidential spokesperson Harry Roque stated last Sept. 2, 2021, that “among all the price quotes that we got, it (Pharmally Pharmaceutical Corp.) had the lowest.” Roque explained: “There were other formal proposals gathered by the DBM (Department of Budget and Management) and these proposals offered prices that were higher than the one submitted by the company.”

On the contrary, records of the Procurement Service of DBM (PS-DBM) reveal that Pharmally actually submitted the highest price quotation for surgical masks. Pharmally was even allowed to submit two different quotations on the same day. The following were the companies that submitted proposals with their corresponding prices (see chart):

The place of delivery of the surgical masks as stated in the Purchase Orders of PS-DBM are government warehouses in Metro Manila. In April 2020, however, the newspapers reported that two Philippine Air Force cargo planes and one Philippine Navy ship were sent to China to pick up personnel protective equipment (PPE) purchased by PS-DBM. An Inquirer.net report quoted Defense Secretary Delfin Lorenzana, “We will use a combination of planes and ships. We will use our military.” Lorenzana further told reporters, “In fact, PS-DBM is procuring 3 million more because the use of PPEs is really fast.”

If the surgical masks transported by the Philippine Air Force planes and the Philippine Navy ship from China to Manila were those procured by the PS-DBM from Pharmally, then the cost of shipment from China to Manila should be deducted from the purchase price. If the surgical masks transported from China to Manila were not those procured from Philippine-registered companies but from Chinese suppliers based in China, then the names of these Chinese suppliers must be disclosed. So far, the public has not been informed that PS-DBM purchased directly from suppliers based in China, with the place of delivery in a Chinese airport or seaport. The prices and terms of such purchases, if any, should be disclosed to the public.

Roque also stated that due to the Non-Disclosure Agreement (NDA), the government cannot disclose the actual price that the Duterte administration paid for the Sinovac vaccines. However, Roque promised, “Once it has been delivered and we have signed the contract, we will be obliged to tell you how much it costs.” The Sinovac contract has been signed, and the vaccines have been delivered. Despite Roque’s promise, the Duterte administration has not disclosed up to now the actual price of the Sinovac vaccines.

Other countries that purchased Sinovac, like Indonesia and Thailand, have publicly disclosed their purchase price of Sinovac vaccines. Any permanent NDA on the purchase price of the Sinovac vaccines violates another provision of the Constitution: “The right of the people to information on matters of public concern shall be recognized.” Only those who have something sinister to hide will not recognize this right.

Read Next
‘Buking’
EDITORS' PICK
Gear up and get ready to play with Yamaha Mio Gear
Acer starts the year off strong with the Aspire Vero National Geographic Edition
Over 3 Million worth of prizes to be won at Smart Padala’s SENDali Manalo Promo!
Uproar over no vax, no ride policy: Maybe it’s time for gov’t to say sorry—Bello
97% of COVID-19 beds at PGH currently occupied
Japan brings back virus restrictions over Omicron surge
MOST READ
1Sambayan names 7 aspirants in its 2022 Senate lineup
Emma Stone calls Andrew Garfield a ‘jerk’ after he ‘lied’ about his ‘Spider-Man: No Way Home’ appearance
Guevarra to Acosta: Obey rules on unvaccinated
PH to import 60,000 tons of fish to cover shortage
Don't miss out on the latest news and information.