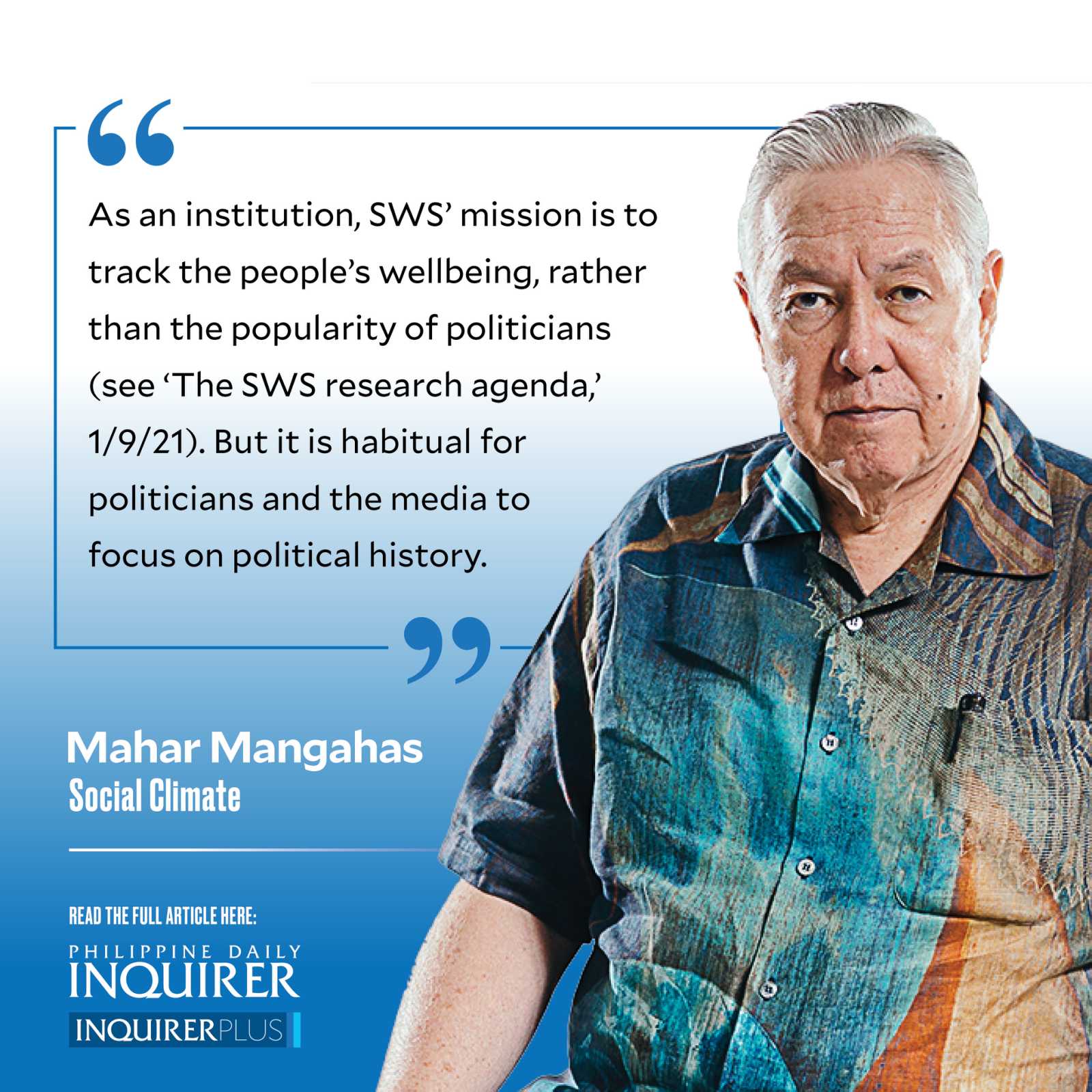 Recently, for the first time in my column-writing years, I ended with “To be continued,” because the story (“Unplanned longevity,” 8/14/21) was incomplete, but had well overrun its space. It told of the early years of Social Weather Stations, up to May 1992, when our final pre-election survey reported that Fidel Ramos and Miriam Defensor Santiago were in a close fight for the presidency. (The latter, when she was agrarian reform secretary, had asked us if her survey numbers meant she should run for president; we had no answer.) Although they were statistically tied, the “undecideds” were lopsidedly rural, which earlier surveys had shown as predominantly pro-Ramos. So we said he would probably win.

SWS had no formal business arrangement with President Ramos. He often invited us to report our findings at Cabinet meetings, and so we did; he encouraged his Cabinet to patronize surveys. In our polls of the popularity of Cabinet members, health secretary Juan Flavier proved outstanding; he became a two-term senator, in 1995-2007. Both Joseph Estrada and Gloria Macapagal Arroyo were SWS subscribers, from the time that they were vice presidents.

By 1992, SWS had enough clients to venture into doing its national surveys quarterly. This is why the SWS time series on Self-Rated Poverty, gainers/losers and optimists/pessimists, satisfaction with governance, victimization by crime, and sense of public safety have been quarterly since 1992. Our Hunger indicator came aboard in 1998, and has been quarterly since then (see “Statistics for advocacy,” 3/27/21).

All these regular survey indicators of wellbeing are pro bono. The raw data are archived; they are part of social history. As an institution, SWS’ mission is to track the people’s well-being, rather than the popularity of politicians (see “The SWS research agenda,” 1/9/21).

But it is habitual for politicians and the media to focus on political history. Traditional historians would recall 1995 as the year of the Flor Contemplacion tragedy. Social historians should recall it as the year of the rice price crisis, which could have been avoided had rice importation not been controlled by the government, which thought it bad politics to import rice before the May election.

To sustain its pro bono survey indicators for the long term, SWS allows some space in its quarterly Social Weather Report survey for sponsored questions, making it an omnibus survey that allows revenue passengers. Sponsored items may be embargoed for three years at most. Thus the raw data from all our survey projects that ended not later than three years ago are already open for research. We have the right to charge fees for accessing the data, as other survey archives do.

For those with the capacity to do scientific surveys, the year before an election has opportunities for both business and the sheer pleasure of learning voters’ moods. I recall a provincial project tasked to see who of three challengers from a certain party would have the best chance of defeating an incumbent governor. The strongest, A, was an incumbent congressman, who was pleased at the result. But since the next strongest, B, also had a fairly good chance to win, the party made him the candidate, so that A would not have to sacrifice his seat in Congress. Both A and B won their contests.

Another provincial project had the same objective of letting a survey decide which of three contenders should be a party’s candidate for governor. When the survey found them ranked D-E-F, both E and F objected, claiming the survey was unreliable. The party broke up; all three ran against each other (and against some other contenders). The election outcome was D-E-F.

Election time is a season for testing survey quality, by comparison with the election outcome. There will be repeat business for those who succeed.