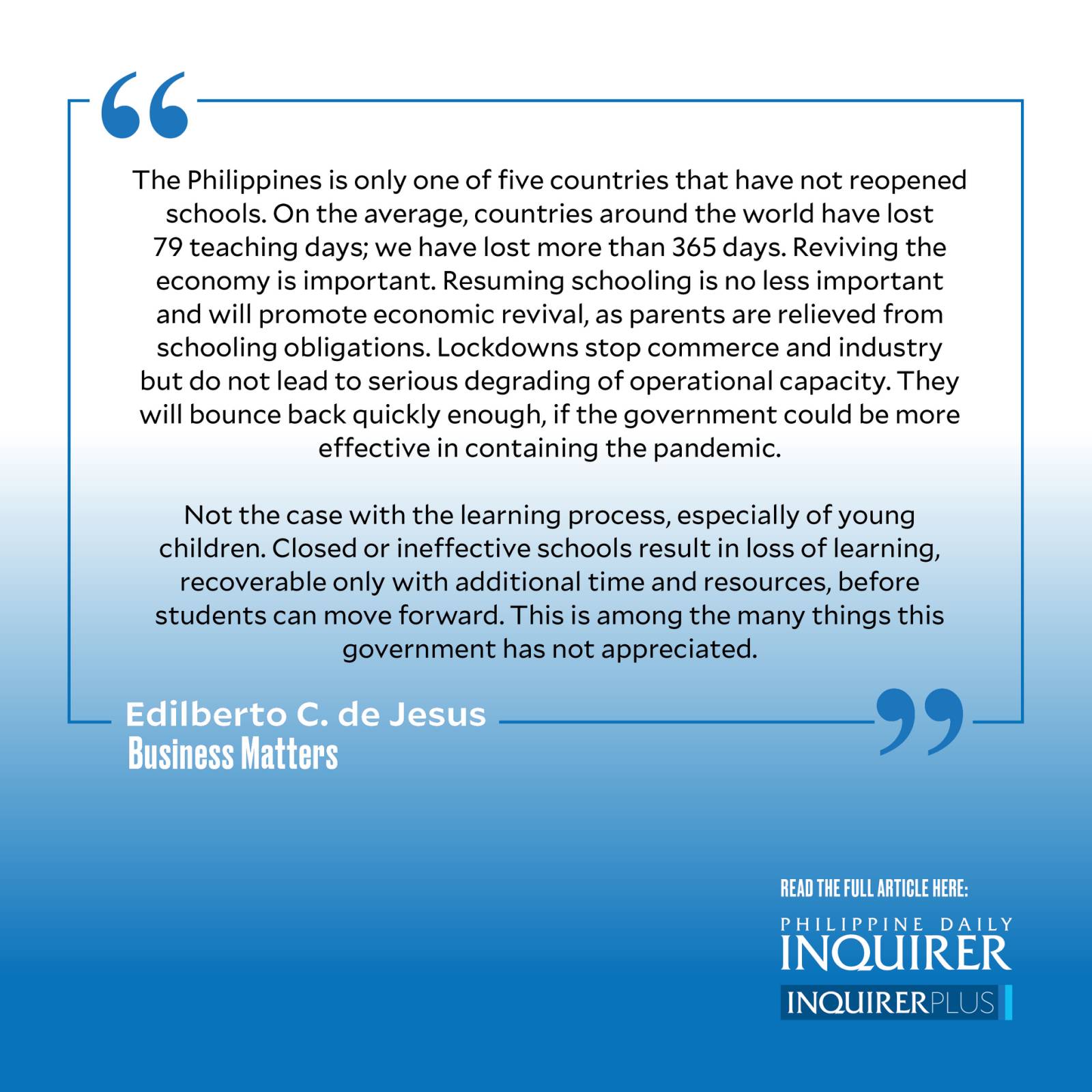 At its webinar reviewing the last State of the Nation Address, the Center for Liberalism and Democracy asked the panelists to begin their sessions by grading, on a 5-point scale with “5” as the highest score, the President’s five-year record. The panel enlisted resource speakers with extensive experience working on sectoral concerns: labor, agriculture, human rights, gender issues, urban settlements, and the welfare of indigenous peoples.

As it turned out, I gave the government the highest grade, and I found myself having to justify my 2-2.5 rating for its record on basic education. In fairness, I did not think I could give a mark solely on the basis of the current dismal state of basic education, which would deserve a lower grade. Never mind our placement in international assessment exams; more worrisome was the wide gap between student achievement against target. Hard to defend a 2.5 mark when only 20 percent of students are meeting the competencies they are expected to learn and when, on the average, Grade 12 graduates have Grade 6 basic competencies.

I accept the complaint of Secretary Leonor Briones that she cannot be held accountable for all of the problems of the Department of Education (DepEd). While Grade 12 graduates completed senior high school under her watch, she can correctly argue that she had no influence on their preparation in junior high school. The public should only evaluate her effort to address the problems she inherited and her success in coping with the problems that came during her term. Among these was her handling of presidential policy “inclinations,” despite President Duterte’s frequent claim that Cabinet secretaries are responsible for their departments’ work.

The pandemic cannot excuse the academic problems exposed by international examinations before its assault. But calamities and economic downturns, especially of uncertain duration, trigger natural responses not helpful to education. In the hierarchy of needs, survival becomes the overriding value. Corporations focus on controlling their budgets, conserving cash, and focusing on critical operational issues. Human resource departments lose funding even for internal training courses. Poor countries, unfortunately, tend to follow the corporate approach.

Empirical studies show, however, that governments burdened with a high poverty incidence need to boost rather than restrict social spending as a matter of social justice ʍnot only because the poor are more vulnerable and less resilient against calamities, but also because economic recovery benefits from their productivity.

DepEd is unlikely to get support for a counter-cyclical strategy from Cabinet colleagues pursuing their own agenda and goals. The priority given to agencies attending to public health or the food chain or the distribution of “ayuda” is understandable. But heavier investment in road infrastructure to improve traffic flows at a time of restricted mobility? Chasing insurgents in the jungles or street-level drug dealers? Dolomite beaches?

Households, especially those subsisting at the margins, feel even more intensely the pressure to discriminate among equally important priorities. Food on the table and a roof overhead take precedence over children’s education. Beyond entailing costs, at a time of pandemic-diminished income, schooling also risks contagion. Still, despite survival concerns, the panel reported the strong concern of informal settlers for the education of their children and their demand for government action.

They worry about the prolonged school break and the prohibition of face-to-face sessions causing significant damage to their children’s future employment and life prospects. Unicef has validated these concerns. The Philippines is only one of five countries that have not reopened schools. On the average, countries around the world have lost 79 teaching days; we have lost more than 365 days.

Reviving the economy is important. Resuming schooling is no less important and will promote economic revival, as parents are relieved from schooling obligations. Lockdowns stop commerce and industry but do not lead to serious degrading of operational capacity. They will bounce back quickly enough, if the government could be more effective in containing the pandemic.

Not the case with the learning process, especially of young children. Closed or ineffective schools result in loss of learning, recoverable only with additional time and resources, before students can move forward. This is among the many things this government has not appreciated.

Read Next
Food systems on the edge
EDITORS' PICK
Gear up and get ready to play with Yamaha Mio Gear
Acer starts the year off strong with the Aspire Vero National Geographic Edition
Over 3 Million worth of prizes to be won at Smart Padala’s SENDali Manalo Promo!
Uproar over no vax, no ride policy: Maybe it’s time for gov’t to say sorry—Bello
97% of COVID-19 beds at PGH currently occupied
Japan brings back virus restrictions over Omicron surge
MOST READ
1Sambayan names 7 aspirants in its 2022 Senate lineup
Emma Stone calls Andrew Garfield a ‘jerk’ after he ‘lied’ about his ‘Spider-Man: No Way Home’ appearance
Guevarra to Acosta: Obey rules on unvaccinated
PH to import 60,000 tons of fish to cover shortage
Don't miss out on the latest news and information.