Leni vs Sara: Why Robredo is the better choice 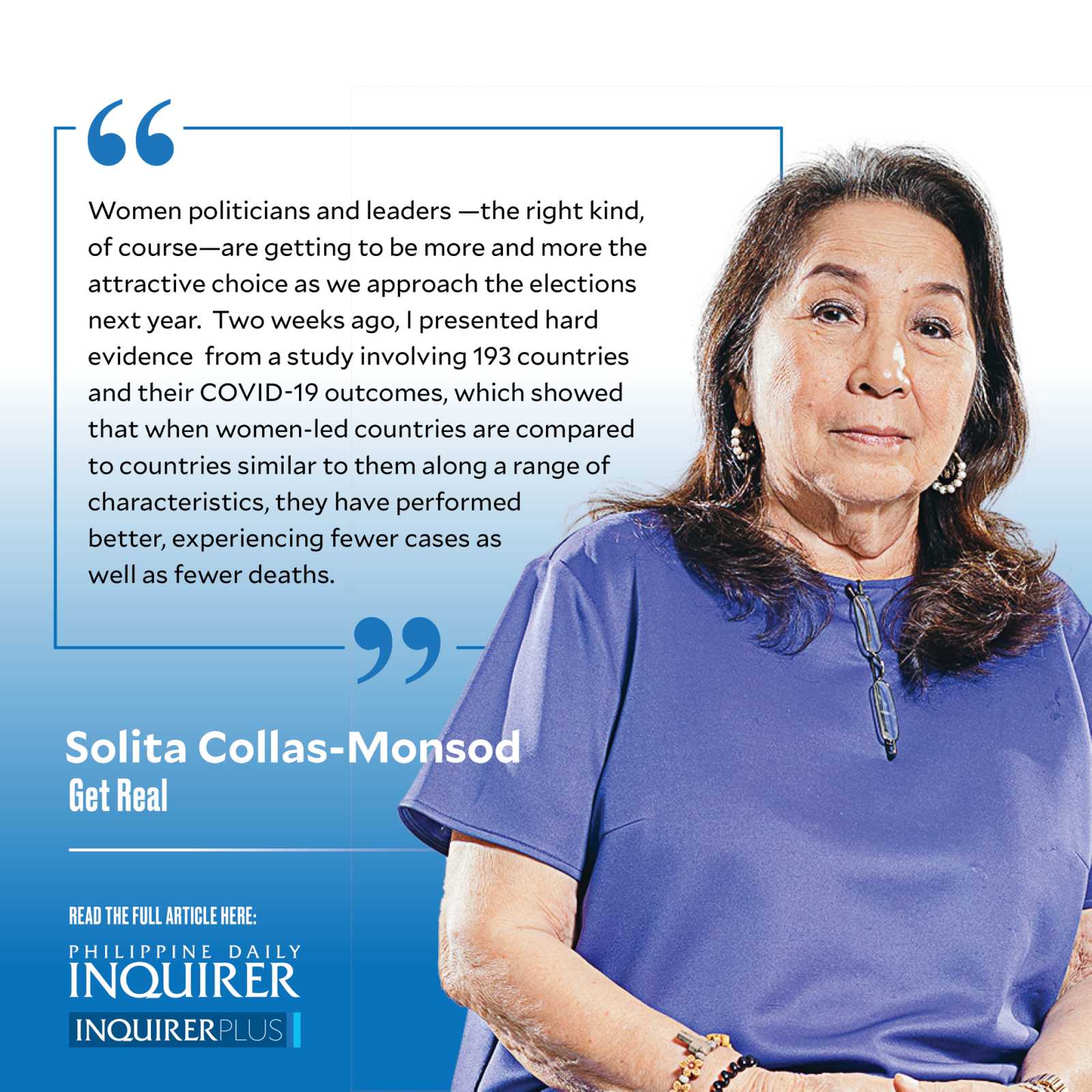 Women politicians and leaders—the right kind, of course—are getting to be more and more the attractive choice as we approach the elections next year. Two weeks ago, I presented hard evidence from a study involving 193 countries and their COVID-19 outcomes, which showed that when women-led countries are compared to countries similar to them along a range of characteristics, they have performed better, experiencing fewer cases as well as fewer deaths.

Reader Eugenio S. Jose then emailed me, asking me to see if there were women leaders who turned into dictators. An interesting point, and I followed his suggestion.

My findings: Apparently, as of June 2020, 70 countries in the modern era have seen women-led governments. As far as I can make out, only one of them, Indira Gandhi of India, became a dictator, on the ruse of a state of emergency in India. This after being prime minister for nine years. But then, her dictatorship (involving suspension of civil rights, press censorship, no deaths/tortures) lasted only 21 months—she herself called for elections, where she lost her seat. But she became prime minister again three years later, so obviously she had some redeeming traits.

Understand, this was a quick and dirty look. But it suggests that 1) women don’t become dictators (one among 70); and 2) the only exception was, compared to male dictatorships (think only of Marcos), a rather short, almost benevolent one.

So that’s another argument for women-led governments. They are very much less likely to seize power and hold it till death do them part. Which is something that we should think about, considering what has been happening around the world, and more importantly in the Philippines of late.

Now comes the question: Which woman leader should we choose? There are, unfortunately for us, only two who are in the running, and at that, no one has officially declared. But we know who they are: Vice President Leni Robredo and Davao City Mayor Sara Duterte.

Well, what do we know about them? I went to Wikipedia, and I also googled the two ladies. And I must say, based on what I read from these two sources, there is no question in my mind that Leni Robredo is the better candidate. You are of course free to disagree with me, Reader, as long as you also show your basis.

First, the similarities: Both are lawyers, with Leni an Economics major (UP) and Sara a Respiratory Therapy major (San Pedro College). Leni had to take the bar a second time before she passed—and I can understand why, with a young, growing family to look after while she was studying.

Sara has been active in politics since 2007, with a hiatus in 2013-2016, as vice mayor and then as mayor, with either father or brother as her running mates. Product of dynastic politics.

Leni entered politics in 2013, battling the matriarch of the reigning political dynasty, whom she beat handily (70 percent over 20 percent). Do you remember that picture of her waiting for a bus to take her from Makati to Naga? What does that tell you about her? So eight years in politics, including the vice presidency which she won battling other dynasties.

What is noteworthy, Reader, is that search as I might, I could not google any information about any project or any activity that Sara Duterte undertook as a political leader, much less in civil society. I do remember a picture of her assaulting a sheriff who was trying to do his duty. On the other hand, Leni Robredo has the Sumilao Farmers’ Express, the Sentro ng Alternatibong Lingap Panligal, which extends legal support to the needy, and the Lakas ng Kababaihan ng Naga under her belt. The Office of the Vice President always passes the COA audit with flying colors, and has received awards for excellent management.

Another, and perhaps the most important, difference between the two, is that Leni will come into the presidency with clean hands and a clean heart. No political baggage: She is a widow, her children have no political ambitions, so the corruption potential is minimized. Only remember our previous women presidents who had to contend with either spouse, children, or siblings.

Think of it, folks. Wouldn’t you like to have, finally, a leadership approach that is nurturing, moral, and reconciliatory, after five years of the opposite?

Read Next
Self-supporting social surveys
EDITORS' PICK
Gear up and get ready to play with Yamaha Mio Gear
PH to import 60,000 tons of fish to cover shortage
Workers are exempted from ‘no vax, no ride’ policy – DOLE chief
#VotePH2022: COVID, power woes loom as poll concerns
Over 3 Million worth of prizes to be won at Smart Padala’s SENDali Manalo Promo!
Acer starts the year off strong with the Aspire Vero National Geographic Edition
MOST READ
Guevarra to Acosta: Obey rules on unvaccinated
Emma Stone calls Andrew Garfield a ‘jerk’ after he ‘lied’ about his ‘Spider-Man: No Way Home’ appearance
Cold-case investigation names surprise suspect in Anne Frank’s betrayal
Czech anti-vax singer dies after deliberate infection
Don't miss out on the latest news and information.