HCWs are not just ‘human resources’ 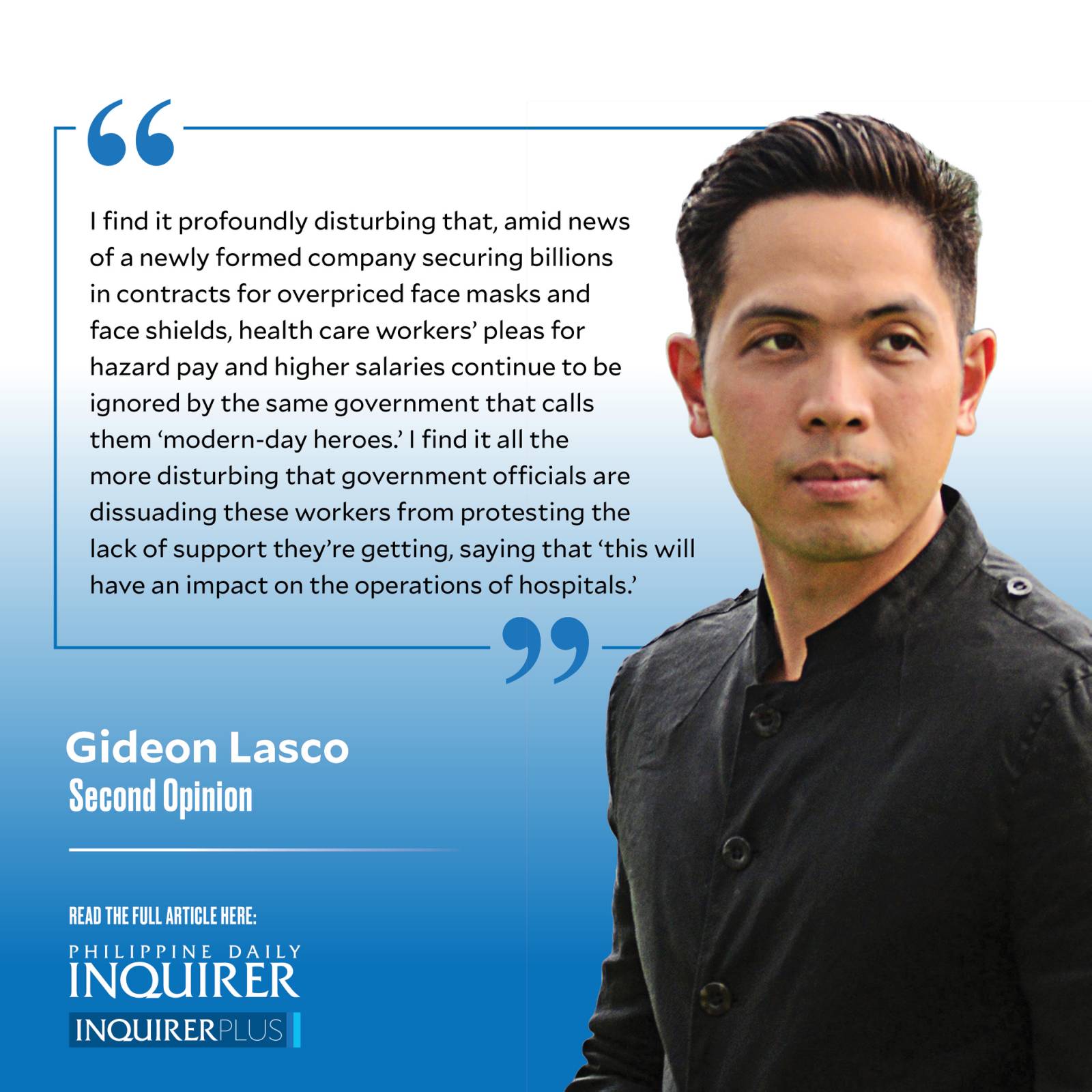 I find it profoundly disturbing that, amid news of a newly formed company securing billions in contracts for overpriced face masks and face shields, health care workers’ (HCW) pleas for hazard pay and higher salaries continue to be ignored by the same government that calls them “modern-day heroes.”

I find it all the more disturbing that government officials are dissuading these workers from protesting the lack of support they’re getting, saying that “this will have an impact on the operations of hospitals.”

It’s as if, in the eyes of the government, HCWs are mere “resources”; mere instruments in the service of the Filipino people.

This is the same logic behind the government’s decision to reject medical students’ pleas to delay the board exam this month, citing the need “to ensure unhampered delivery of health services.”

And this has been the same logic throughout the pandemic, with HCWs left to fend for themselves, arrange their own transport, procure their own PPE, and essentially risk their own lives—even as our top officials wallow in their corruption and incompetence. Remember how Philippine General Hospital personnel were promised Pfizer, only to get Sinovac—and were told not to complain lest they undermine vaccine confidence? At one point, HCWs were even barred from leaving the country to work elsewhere, effectively consigning them to overworked, underpaid conditions.

It’s not as if we don’t have the money to support our HCWs. As with many aspects of our pandemic response, and as with many issues facing the government, the problem is not lack of resources but misallocation and misprioritization. Robert Mendoza of the Alliance of Health Workers was right when he said that “there is so much budget in the DOH and yet they always refuse to provide for health workers’ COVID-19 benefits, safety, and protection.”

I must add that HCWs working in the private sector have had similar issues, as a consequence of a neoliberal health care system that, while not unique to the country, has been especially catastrophic for us given our devolved health system and other factors. Taking advantage of the oversupply of nurses and other HCWs in the country, private hospitals have given low wages and limited benefits long before the pandemic. Even as they have their own legitimate grievances (e.g., delayed reimbursements from PhilHealth), they have largely passed on the financial toll to patients and employees. While some private hospitals have been supportive of their staff during the pandemic, others have been less so.

Regardless, the kind of thinking that instrumentalizes HCWs, and vilifies those among them who protest, will further demoralize HCWs, undermine their families’ abilities to financially and emotionally cope with the pandemic, and impair their quality of life. I cannot emphasize this enough: This should be considered a bad outcome in itself, regardless of how it translates to patient care.

As the pandemic drags on, as COVID-19 infections get closer and closer to our homes, the country relies on HCWs more than ever before, but if we are to treat them more as “humans” than as “resources,” the government must act quickly to address their legitimate demands. Alas, the government can’t even acknowledge their struggles, with some officials inexplicably denying the existence of a “surge” or a currently overwhelmed health care system.

Importantly, these demands are not, and have never been, just about themselves, but how people’s health needs have been handled by the government. HCWs are willing to do their share, but they are rightfully hurt and enraged when they do not see government officials doing their part, say, by coming up with evidence-based, compassionate decisions. They are willing to receive lower wages relative to what they could get elsewhere, but not when someone like Mocha Uson gets several times more. They are willing to keep working, but not when the President himself plays “teleserye” politics instead of leading the nation’s COVID-19 response.

As a government nurse, who asked not to be named, told me: “The worst part [of being an HCW right now] is not the low pay, the stress, or the overwork. It’s not even about the chance of getting COVID-19. It’s the feeling that, because of the government’s incompetence, we’re unnecessarily risking our lives.”