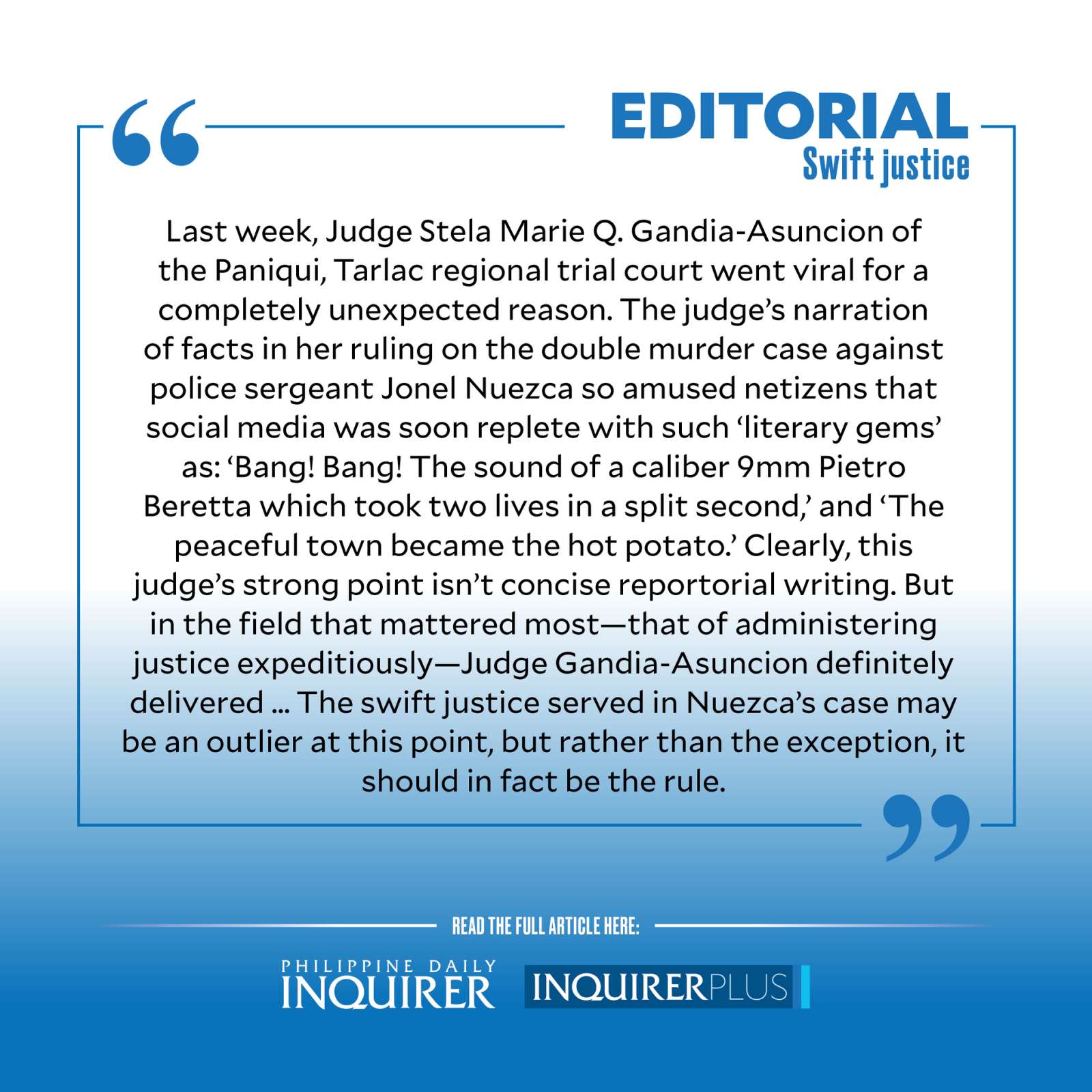 Last week, Judge Stela Marie Q. Gandia-Asuncion of the Paniqui, Tarlac regional trial court went viral for a completely unexpected reason. The judge’s narration of facts in her ruling on the double murder case against police sergeant Jonel Nuezca so amused netizens that social media was soon replete with such “literary gems” as: “Bang! Bang! The sound of a caliber 9mm Pietro

Beretta which took two lives in a split second,” and “The peaceful town became the hot potato.”

In fact, among Filipinos already inured to the country’s creaking justice system where cases drag on for years and even decades, Gandia-Asuncion’s ruling—which came a mere eight months after the crime was committed—can be considered one for the books. More so because it involved the police, a good number of whose members have reveled in the sense of impunity imparted by repeated and public assurances by the Chief Executive that he has their back.

The Supreme Court itself was moved to laud Gandia-Asuncion’s “swift and efficient” resolution of the case against Nuezca, whose fatal shooting of a mother and her son after an argument in December 2020 was caught on video and provoked nationwide outrage.

“The timely resolution of cases is both a constitutional mandate and a key aspect in the delivery of justice. May her example inspire all of us to continue working towards a judiciary that is both receptive and responsive to the needs of our citizenry and the community,” Chief Justice Alexander Gesmundo said in a statement released by the Supreme Court.

“Despite the challenges brought about by the pandemic and community quarantines, she was able to hear and resolve these two cases in eight months,” he added. That was two months ahead of the 10-month deadline for hearing and deciding criminal cases. Eight witnesses were heard at the trial—five for the prosecution and three for the defense, including Nuezca who testified via videoconferencing.

Nuezca was found guilty beyond reasonable doubt of two counts of murder for killing his neighbors Sonia Gregorio and her son Frank Anthony, and was sentenced to reclusion perpetua, or up to 40 years in prison for each murder. He was also ordered to pay almost P1 million in damages to the heirs of his two victims.Gandia-Asuncion’s resolute will to dispense justice should give pause to—and hopefully strike fear in the hearts of—rogue police officers who are currently facing charges for flagrantly ignoring, nay, arrogantly flouting, their pledge “to serve and to protect” the public, and the rest in the force inclined to do so.

News of police transgressions continue unabated. There’s the kidnap/slay of online seller Nadia Casar from Cavite, whose body was burnt and buried by at least five cops in Sta. Rosa, Nueva Ecija in July. The policemen involved were identified by the Grab driver whom Casar had hired to bring her to Nueva Ecija to deliver stuff to a supposed buyer, who turned out to be one of the felons involved. Eleazar said the police officers have been dismissed from the service and are facing charges. Two remain at large.

Seven police officers are also facing murder charges and six counts of arbitrary detention for their involvement in the “bogus” drug bust in San Jose del Monte, Bulacan in February last year, that led to the death of six civilians who just happened to be passing by during a police operation. The charges, however, were filed in absentia, as the Justice department has admitted not knowing the whereabouts of the seven cops, no thanks to the delay in the investigation of the case.Just as disheartening is the mere 40-day suspension meted out to the policeman who shot dead an autistic boy during a police raid on an illegal cockpit in Valenzuela, Bulacan in May. The police’s claim that Erwin Arnigo, 18, had wrestled for the cops’ gun was belied by witnesses, who said that the boy had run from the police because of fear from the commotion.

The latest case of police abuse was the alleged rape late last week of a 19-year-old quarantine violator in Mariveles, Bataan by patrolman Elmer Tuazon Jr. and civilian marshal team leader Armando Dimaculangan. Eleazar has ordered the summary dismissal of the police officer and the filing of sexual assault charges against the two men involved.

The dismissal of suspects in police uniform is certainly not enough redress for the victims and their families; it is their prosecution and conviction that completes the process of justice and brings closure to crimes. The swift justice served in Nuezca’s case may be an outlier at this point, but rather than the exception, it should in fact be the rule.