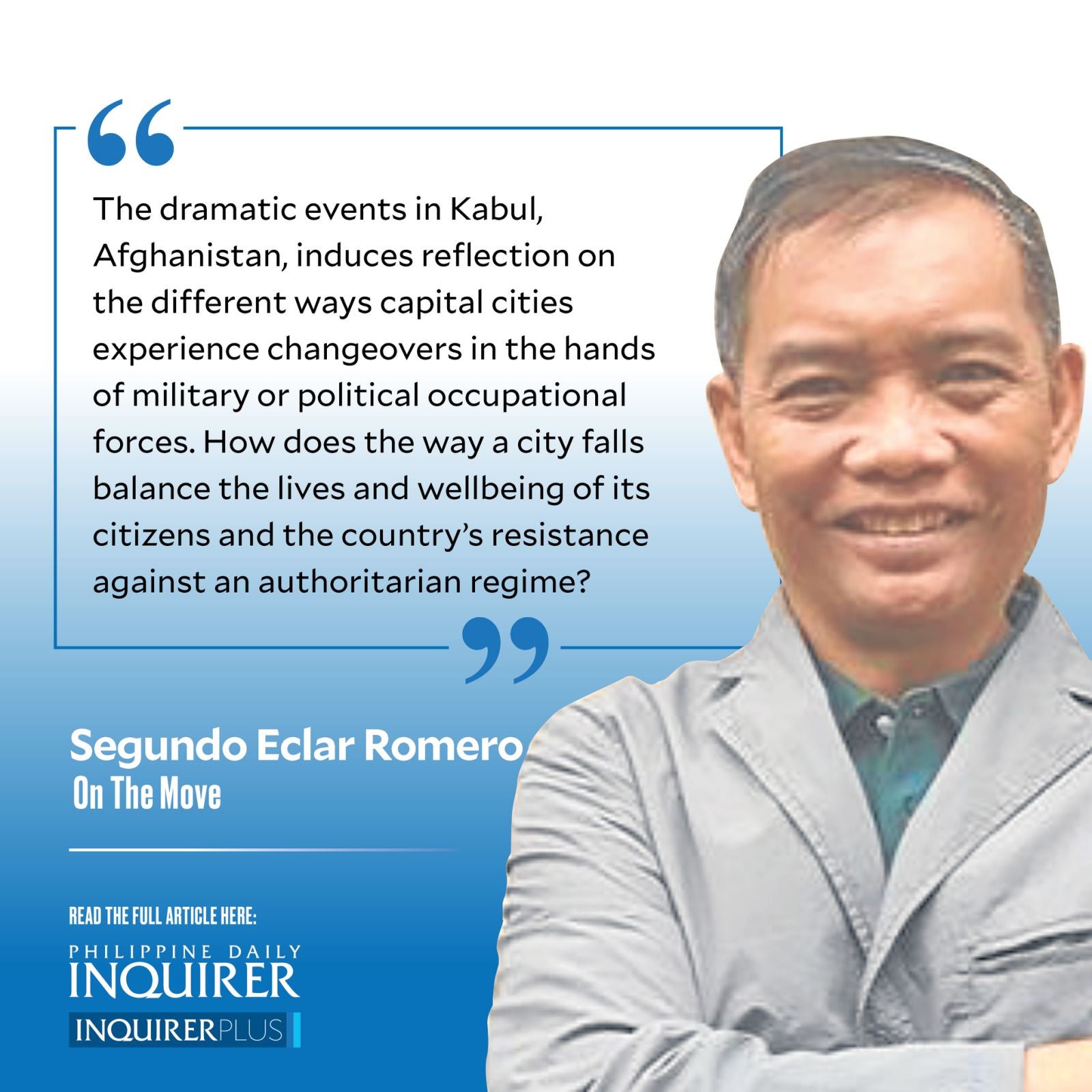 The dramatic events in Kabul, Afghanistan, induces reflection on the different ways capital cities experience changeovers in the hands of military or political occupational forces. How does the way a city falls balance the lives and wellbeing of its citizens and the country’s resistance against an authoritarian regime?

When the Taliban were at the gates of Kabul, Afghanistan, President Ashraf Ghani fled the country. Later he said that he left because of threats to his life and to avoid bloodshed. This action by the President in effect declared Kabul an “open city,” undefended and open to the unopposed occupation by the Taliban.

While bloodshed was avoided, it might have impaired the emergence of a viable subsequent resistance to the Taliban. If Ghani relocated to some other part of Afghanistan, the country might not have fallen as precipitously. There might have been a beacon for Afghans who desired to resist the Taliban, as has emerged in Panjshir. Vice President Amrullah Salleh has declared himself the acting President of Afghanistan and has joined resistance leader Ahmad Massoud to lead the anti-Taliban resistance.

But the shoe can be on the other foot. The action of a president facing imminent toppling to “cut and cut cleanly” works for a people overthrowing an oppressive government. Imagine how violent and tumultuous the situation would have been during the People Power Revolution of 1986 if, instead of Hawaii, Ferdinand Marcos was transported to Paoay, Ilocos Norte. The level of Marcos fanaticism in the Ilocos region might have enabled Marcos to reconsolidate power, considering that the revolt was centered in Metropolitan Manila.

The events in Kabul make me recall the way the “open city” principle was implemented for Manila in December 1942. When I was young, I never understood what it meant that Gen. Douglas MacArthur had declared Manila an “open city” on Dec. 26, 1941. Photos at that time showed large posters and banners that read, “Open city. Stay calm. No shooting.” MacArthur’s open city communique, which was widely published on Dec. 26, 1941, read: “In order to spare the Metropolitan area from the possible ravages of attack, either by air or ground, Manila is hereby declared an open city without the characteristics of a military objective. In order that no excuse may be given for possible mistake, the American high commissioner, the Commonwealth government and all combatant military installations will be withdrawn from its environs as rapidly as possible. The Municipal Government will continue to function with its police powers, reinforced by constabulary troops, so that normal protection for life and property may be preserved. Citizens are requested to maintain obedience to the constituted authorities and to continue the normal process of business.”

However, in the two succeeding days after the announcement, Japanese planes bombarded military logistics ships and interisland vessels in the port area and along the Pasig River. MacArthur considered this a violation of the international law concept of “open city.” However, military historians have pointed out that the Americans failed to remove all military objectives like ships and military headquarters from the city, thus attracting and justifying the Japanese bombings. Actions often do not match commitments or intentions, as the precipitate and incomplete evacuation of people and materiel from Kabul by Americans and other western countries showed.

The Japanese bombings caused heavy damage to many buildings but killed 40 civilians, relatively small if Japanese pilots meant to inflict civilian casualties rather than what was the case—the inaccurate targeting of facilities by the Japanese pilots.

When the Japanese entered Manila on Jan. 2, there was much cheering, with children lining the streets, each one with a Japanese flag in hand. In less than a month from the start of the invasion, the Japanese were able to arrange a celebratory welcome by Manilans for their march into the city. I found a video on YouTube titled “Open City March,” described as a welcoming march for Japanese forces entering Manila in 1942 (https://youtu.be/pqkB0g9HTu4). Before entering Manila, Gen. Masaharu Homma stopped his army 15 miles from the capital so the troops could wash up and march into the city with visible discipline. Even in war, the optics of where the weight of public opinion will sway is important and can be manipulated.