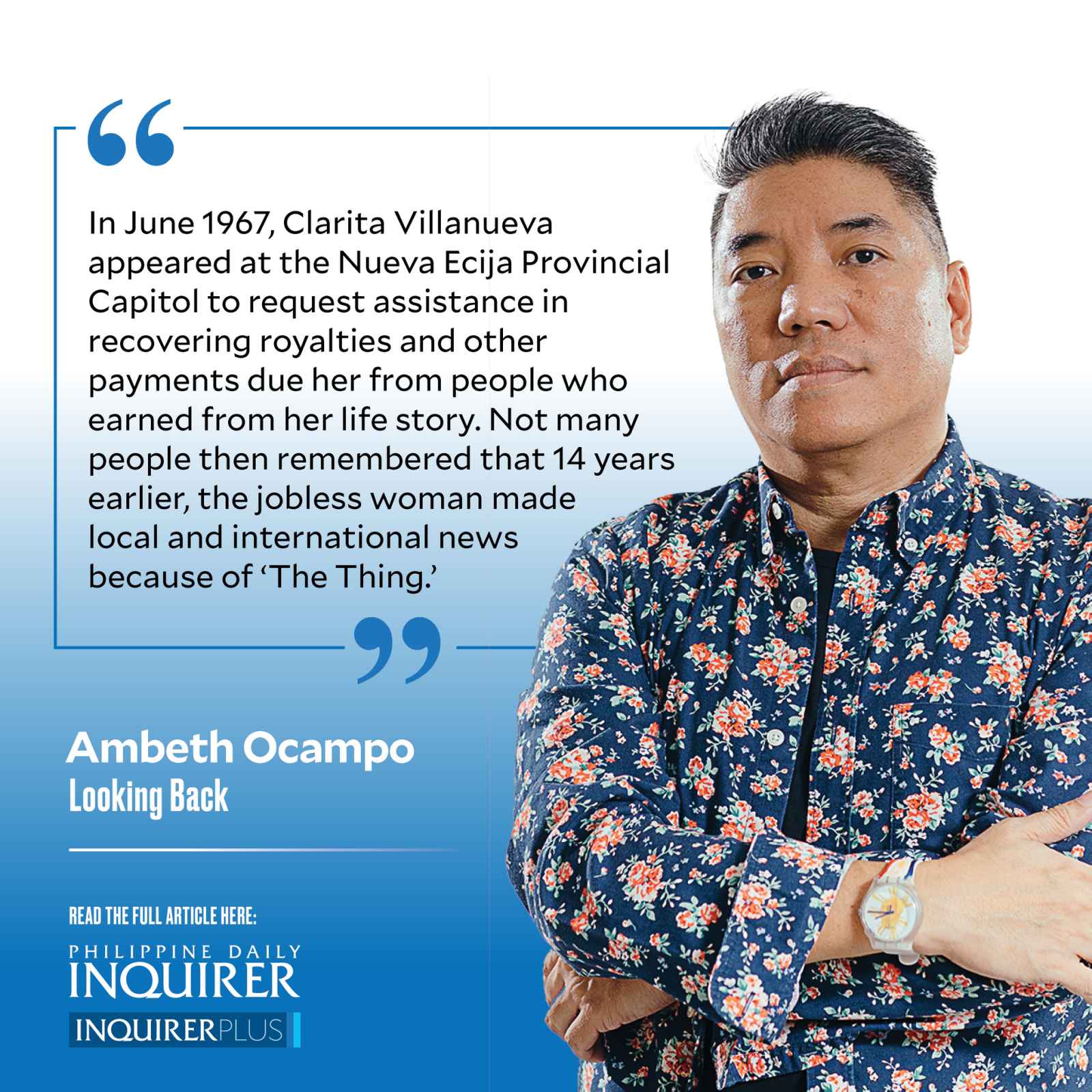 In June 1967, Clarita Villanueva appeared at the Nueva Ecija Provincial Capitol to request assistance in recovering royalties and other payments due her from people who earned from her life story. Not many people then remembered that 14 years earlier, the jobless woman made local and international news because of “The Thing.”

Villanueva was an 18-year-old taxi dancer from Bacolod who was booked for vagrancy and thrown into Bilibid prison in May 1953. The first of many attacks on her person occurred on May 10 after the inmates had prayed the rosary. This invisible “Thing” tickled, strangled, and bit Villanueva in front of many witnesses, including Manila Mayor Arsenio Lacson. Her ordeal invited a host of interviews from policemen, medical doctors, psychologists, judges of the Manila Court of First Instance, journalists, and of course the usual Pinoy “uzizeros.”

Villanueva described “The Thing” as two entities: first, “a big dark hairy man with talon-like fingernails and big-fanged teeth”; and second, “a boy with a cherubic mustachioed face, little even teeth, and angel-like wings.” When Mayor Lacson interviewed Villanueva in Visayan, she described the two invisible men who tormented her as “a big one with curly hair on the chest and all over the body, the other a boy with long slender legs and with a big mustache.”

After he watched bite marks appear from nowhere on Villanueva’s index finger and neck, Mayor Lacson advised “The Thing” to “decamp to Malacañang” and bite President Elpidio Quirino and Defense Secretary Oscar Castelo instead. “The Thing” was said to be not amused and did not want its deeds given political color. Villanueva warned the Mayor in Tagalog: “Ikaw rin! Ibig kang kagatin! “ (You too! They want to bite you!) Unfazed, Mayor Lacson replied: “Don’t mistake me for Governor Lacson of Negros!”

Lt. Col. Jaime C. Zaguirre of V. Luna General Hospital’s neuro-psychiatric department diagnosed Villanueva as suffering from a “hysterical fugue” (“a rare psychiatric abnormality characterized by reversible amnesia for one’s own personality”). He remained unconvinced by what he heard and dismissed the “teeth marks” on her neck as mere discoloration and swelling caused by vasomotor reaction. He said that with proper medical treatment, Villanueva would be cured in a few days.

Upon medical examination, she did bodily movements usually associated with demonic possession: trembling, spasms, seizures, etc. “She began to make some signs, uttering a few gurgling sounds at the same time. Some of the people present interpreted these signs to mean that she was hungry, so Clarita was given bread to eat. Clarita, however, seemed to prefer the paper in which the bread was wrapped.” Later, doctors from the National Psychopathic Hospital declared “The Thing” as a hoax. In one instance after Clarita wrestled with “The Thing,” hair was found under her fingernails. Dr. Irineo Gonzalez, a medico-legal, declared that the hair was human and curly.

Mayor Lacson did not believe the medical diagnosis and reached out to the Rector of the University of Santo Tomas and Manila Archbishop Rufino J. Santos, requesting an exorcism. The challenge of battling spiritually with “The Thing” was taken by three American Methodist ministers, led by Dr. Lester Sumrall (1913-1996). He began by asking Villanueva if she knew Jesus Christ, and she replied negatively. Sumrall asked everyone in the room to pray with him, and Villanueva said that “The Thing” ran out of the window. Sumrall claimed victory, only to be disappointed when “The Thing” supposedly returned.

By the end of the month, other people also claimed to have been victims of “The Thing.” Hermogena Villahermosa, a 36-year-old housewife who lived on Calle Aviles in San Miguel, said she had been beaten by “The Thing” since 1950, with the most serious attack in 1952 that prompted her to have her injuries examined by X-ray. Results revealed Chinese writing on the film! Then, there was Mrs. Maura Manuel, who was detained in Bilibid on 14 counts of estafa. She showed reddish swollen marks on her legs and neck and claimed that she had also been attacked by “The Thing.”

Last year, yet another movie was made on “The Thing,” but we are still far from the truth or the whole story. All I have are random clippings from the Manila Times, the Daily Mirror, and the Chronicle, and these are best left to Ripley’s Believe It or Not.