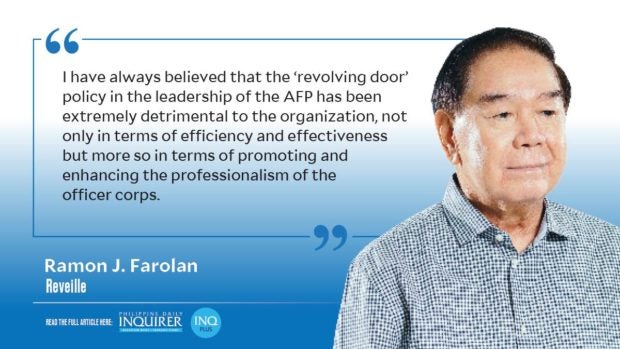 Perhaps, not too many people are aware that since the start of August, the AFP welcomed a new chief with Gen. Jose Faustino Jr. replacing Gen. Cirilito Sobejana who served for six months. General Faustino was originally named Philippine Army commander but with less than a year left for military service, the law disqualified him for the position. However, he remained qualified for the higher post of AFP chief. Now, if you are puzzled or confused as to how any officer could be disqualified for the position of Army commander but qualified for the higher post of AFP chief of staff, let me just say it is a thought-provoking issue that perhaps only our decision-makers can explain and justify.

In the first 21 years of the 21st century, the AFP has had 27 chiefs of staff. President Gloria Macapagal Arroyo appointed 11 during her 10-year tenure with the longest serving for one year and 10 months. President Noynoy Aquino had six chiefs in his time. Incidentally, at the start of his presidency, there was a glimmer of hope that he would put an end to the “revolving door” policy of his predecessor. However, in 2012 he vetoed a bill ratified by Congress providing for a fixed term of office for the AFP chief and major service commanders. Unfortunately, he also failed to initiate any new legislation to reform the system. His actions resulted in maintaining the previous practice.

President Duterte has so far named 10 AFP heads in his five years in office. He still has time for one more, possibly two.

After their tours of duty with the armed forces, General Visaya was named head of the National Irrigation Administration, General Año took over the DILG, General Guerrero was appointed administrator of the Maritime Industry Authority before moving to the Customs bureau, General Galvez is the vaccine czar for COVID-19, while General Madrigal is head of the Philippine Coconut Authority.

One would think that the AFP chief, the man most responsible for national security and defense operations, would have more stability in office and a reasonably adequate tenure to carry out reforms and prepare for the future. But this has not been the case. Instead, we have this proliferation of chiefs of staff that has diminished the prestige, the power, and the influence of the occupant, making him more of a figurehead especially in regional and international circles. Instead of serious discussions with counterparts if any, the question hanging over the conversation is: How long are you staying, or when are you retiring? And, they know the answers.

I have always believed that the “revolving door” policy in the leadership of the AFP has been extremely detrimental to the organization, not only in terms of efficiency and effectiveness but more so in terms of promoting and enhancing the professionalism of the officer corps. One of the most respected figures in Philippine management circles was the late Washington SyCip, founder of SyCip Gorres Velayo and Company (SGV & Co.), and the Asian Institute of Management. At a general membership meeting of the PMAAA Inc., where he was the guest speaker, he declared: “We who are in the private sector wonder about the rapid changes in the military leadership. In the private sector, we will not have CEOs with one- or two-year terms if we want reforms or proper planning for the future.”

Today, the Philippines is the only country in the world with an active communist insurgency. The lack of stable leadership in our armed forces is a fundamental problem that must be addressed if we are to see an end to armed conflicts that threaten the security of the nation.