Shades of Afghanistan in PH society 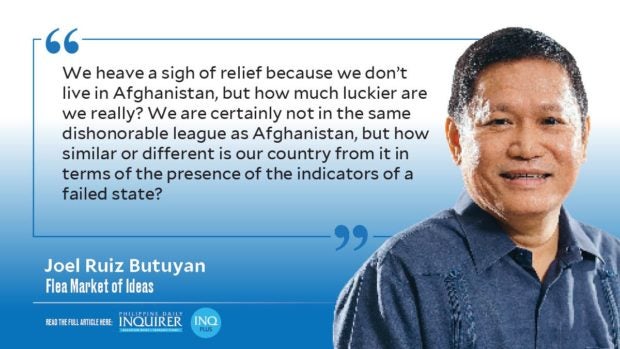 When news broke that Taliban forces had captured Kabul and gained control of the entire Afghanistan, many Filipinos felt a mixture of intense emotions. There was extreme dread because of the brutality of the Taliban. There was deep pity for Afghans, most especially for the women who would have to live under a tyrannical government proud of its barbaric ways. But there was also a huge sigh of relief because of the feeling that we’re fortunate to have been born in the Philippines and not in a country like Afghanistan.

With the collapse of its elected government and the takeover by an extremist cult with a twisted version of a peaceful religion, Afghanistan has once again joined the world’s list of failed states.

We heave a sigh of relief because we don’t live in Afghanistan, but how much luckier are we really? We are certainly not in the same dishonorable league as Afghanistan, but how similar or different is our country from it in terms of the presence of the indicators of a failed state?

An international organization called The Fund for Peace (FFP) comes up with an annual “Fragile States Index” (FSI). It analyzes the fragility of countries based on four “indicators,” namely: cohesion, economic, political, and social. The indicators include the absence or presence of country features such as extensive corruption and criminal behavior, sharp economic decline, group-based inequality, institutionalized persecution or discrimination, severe demographic pressures, brain drain, environmental decay, and large-scale involuntary dislocation of the population.

In its 2021 FSI, the FFP ranks Yemen as the No. 1 most fragile state, and Finland as the least fragile out of 179 countries. The other countries at the bottom include Somalia (2nd), Syria (3rd), South Sudan (4th), and Congo (Democratic Republic) (5th). Afghanistan ranks No. 9, but this may not reflect current developments. The countries at the top include Norway (178th), Iceland (177th), and New Zealand (176th). The United States ranks 143rd, Russia is 74th, and China is 95th.

Apart from these broad analyses, what do we see on the ground that reflects the fragility of the Philippines, viewed from the prism of what has happened to Afghanistan?

We see thousands of Afghans scrambling to leave their country in very heart-wrenching images at the Kabul airport. The diaspora of millions of our countrymen to greener and safer pastures abroad may be less dramatic, but is it not also an indicator of how fragile our country has been for so long?

We see a significant sector of Afghan society driven by religious extremism and, resorting to armed struggle, has captured political power in Afghanistan. How about the spread of religious fanatics in Philippine society who, while not resorting to armed struggle, have regularly succeeded in capturing political power in conspiracy with the worst of our politicians? Is the growth of these fanatical groups not also an indicator of the fragility of our country?

The reason cited for the Afghan government’s sudden collapse is the horrendous level of corruption in its ranks. Afghan soldiers abandoned their posts or surrendered readily to the Taliban because they were not given supplies of food and ammunition, and their salaries were not paid, even if a trillion dollars in foreign aid were poured into the country.

As our country’s war against COVID-19 reaches another crucial phase, we are hearing that our health workers have not been given their hazard pay, and billions of public funds have gone into overpriced and corruption-

laden purchases of face masks and face shields. Now, our health workers are threatening to resign en masse. There’s also grumbling among private hospitals that are not being paid tens of billions owed by the government.

We may be luckier compared to Afghanistan, but for how much longer?