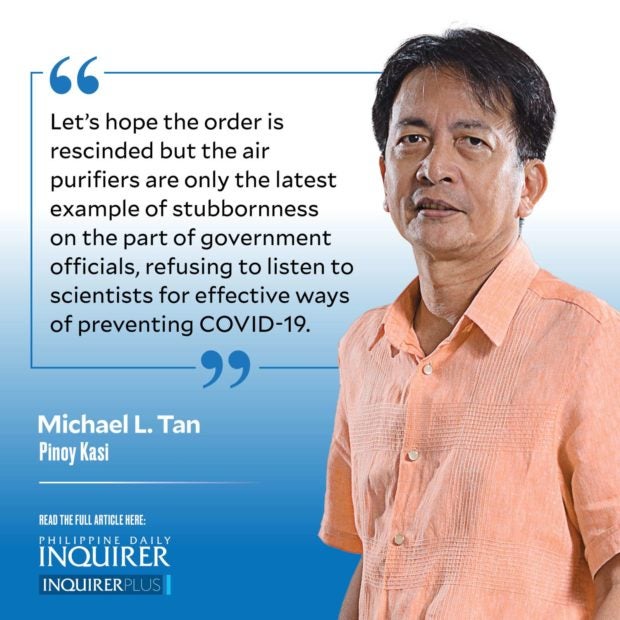 I am so glad Health Undersecretary Maria Rosario Vergeire has declared Monday that “there is no evidence” for wearable or necklace air purifiers protecting against COVID-19.

Vergeire was reiterating a joint recommendation issued in February 2021 by several scientific bodies—the Institute of Clinical Epidemiology, the National Institutes of Health, UP Manila, and the Philippine Society for Microbiology and Infectious Diseases.

These necklace purifiers are nothing more than 21st century “anting-anting” or amulets, with a blinking light like the eye of a god. They’re expensive, too, costing from P600 to as much as P7,000 each.

Sadly, the Cebu provincial government is requiring that bus drivers and conductors use these purifiers. Bus operators are supposed to shoulder the cost of the gadgets and following protests against the order, the implementation has been moved to Aug. 25.

Let’s hope the order is rescinded but the air purifiers are only the latest example of stubbornness on the part of government officials, refusing to listen to scientists for effective ways of preventing COVID-19.

A year and a half after the pandemic erupted, we’ve seen how our knowledge about the virus has changed. We are certain now about how the virus is transmitted and what can be done to prevent that transmission, as well as what doesn’t work.

Let’s tackle the “what doesn’t work” first. We start with face shields, at least the type that’s being sold for daily use. The face shields used in hospitals are made differently and do work, but they are impractical for outside use. We seem to be the only country in the world that requires these face shields, which are cumbersome and end up putting users in harm’s way—with how they fog up and affect vision as well as the shields being easily dismantled or falling off.

Initially during the pandemic, there were fears of fomite transmission, that is the virus being spread through surfaces. The World Health Organization and other health authorities no longer consider fomite transmission a risk, making it unnecessary for measures like foot baths or stomping pads (which can even cause falls) and disinfection through misting (actually dangerous, too, if chlorine is used). Even hand sanitizers are now de-emphasized but, together with hand-washing, this basic hygiene that can prevent transmission of respiratory diseases.

Then there are the extremes of our lockdown, reflecting a fear of the outdoors when the vast majority of infections occur indoors. But no, the government refuses to listen, even banning outdoor exercise. Then there’s the continuing sequestration of seniors and children. A pre-pandemic study showed 30 percent of our urban children are suffering from Vitamin D deficiency, which is from a lack of sunlight. I am sure that’s worsened with the pandemic lockdowns and will mean problems with bone development for those affected.

Masks, properly used, prevent the spread of the virus.

Physical distancing continues to be important and with the more contagious variants like Delta, it might be safer to use more than the locally recommended one-meter distance.

As scientists discovered fomite transmission was not important, they began to realize that the greatest danger was that of the virus lingering in the air in enclosed spaces with poor ventilation. Yet, good ventilation is still the most weakly promoted prevention measure.

I recently received a notice from my alma mater, the University of Amsterdam, which is bringing back face-to-face classes and they have very simple advice about ventilation, similar to official advisories of other European countries: regularly opening opposing windows and doors for 10 to 15 minutes every 1 to 2 hours. No need to do that of course if you are alone in the room but the more people there are in the room, the more frequent the need to circulate the air, bringing in fresh air and sending out stale air from inside the room, in case you are sharing the air with someone infected. This applies as well to rooms that are air-conditioned. Similar advice has been given as well for vehicles: roll down opposing windows (e.g. driver’s and passenger’s sides).

The Japanese, who were concerned about aerosol transmission as early as March last year, have pushed for “sanmitsu,” translated into English as 3C’s. Avoid crowds, closed spaces, and close distances between people.

Finally, vaccinations. We are facing the realities of fully vaccinated people still getting infected, with some deaths, but the numbers are far lower than with unvaccinated people.

Let’s clear the air of the virus, and misinformation.