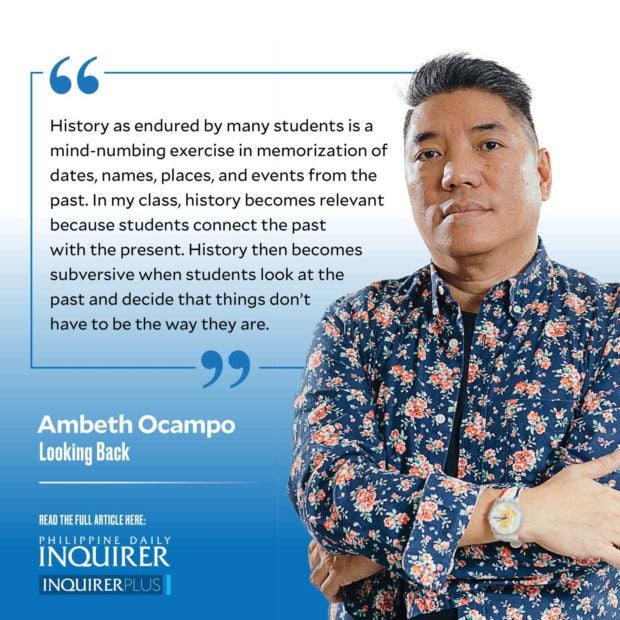 Course content, Rizal’s life and work, remains the same as other classes all over the country but mine differs in delivery. Instead of a standard textbook that provides all the details of Rizal’s life from birth to death, we learn about that same life using primary sources, to learn about Rizal by reading Rizal.

Rizal’s early life is best learned by reading a juvenile diary that described his Calamba childhood, the stories his yaya told him, the local names of the plants in their backyard including the names of each bird that alighted on the trees. As the seventh child in a brood of 11, growing up in an upper-class home with nine sisters, an elder brother, a domineering mother, and a distant father formed him. His diary records the pain of leaving home for the first time to study in Biñan, and the journey continues to the Ateneo Municipal and University of Santo Tomas in Intramuros. An anguished chapter details the thrill of his first love and the agony of giving it up for concerns larger than himself. Often overlooked, “Memories of a Manila Student” shows a pattern repeated all through his life, a struggle between conflicting commitments. So intimate, it is that on its cover is the name “P. Jacinto.” To further hide his true identity further, he crossed out the place of birth in the opening sentence: “I was born in Calamba on June 19, 1861, between 11 and midnight, a few days before a full moon.” We know the manuscript is his because he brought the notebook to Europe with him, filled some pages with Eygptian hieroglyphics and absent-mindedly signed his real name in the back.

Each semester I fret over my course content, looking for supplementary material that will make a 19th century life relevant to a 21st century student. An excerpt from Doreen Fernandez’s “Palayok” identified the various cultures that influenced Filipino food from prehistoric times to the present. It shows that primary sources are not confined to documents and books, that history is also expressed in the food we eat. This semester, adobo will be taken up in light of the controversy over the attempt of the Department of Trade and Industry to “standardize” the dish and define what it is for ourselves and a global market.

I have had to defend my course syllabus twice from well-meaning but ignorant folks who had no appreciation for my discipline. The first challenge was that of relevance; someone looked at my reading list and snorted: “Why are the copyright dates of your materials so old? You should definitely update this.” While courses in the hard sciences or literary criticism have readings with dates closer to our day, history is a different animal. I won’t require Leandro H. Fernandez’s “A Brief History of the Philippines” (1919) as a standard reference. Secondary sources can be current, but the primary sources are naturally old. “Noli Me Tangere” has Berlin 1887 as publication date and Ghent 1891 for “El Filibustersimo.” We cannot change that, but there are contemporary perspectives on Rizal’s novels: Marxist, Feminist, or even Transgender lens enlarges our understanding of these novels.

The second challenge to the syllabus had something to do with gender balance or gender ratio of my readings. “Why is your reading list predominantly composed of dead male writers? Can’t you have more works by women?” My syllabus has only three readings by women: the memoirs of Gregoria de Jesus, widow of Andres Bonifacio; Doreen Fernandez on food; and Soledad S. Reyes on the “Noli.” The letters of Rizal’s sisters and girlfriends should count, but these are optional. I vainly seek out not just writing from strong women, but sensitive men too. And while we are at it, transgender readings.

History as endured by many students is a mind-numbing exercise in memorization of dates, names, places, and events from the past. In my class, history becomes relevant because students connect the past with the present. History then becomes subversive when students look at the past and decide that things don’t have to be the way they are.

Read Next
Air purifiers
EDITORS' PICK
DOTr to defend proposal to increase passenger capacity in public transport
Work-From-Home is here to stay and requires reliable logistics
Legarda emphasizes role of ICC/IPs in nation building this IP month
The crisis within: Suicides rise as COVID takes its toll on lives, livelihood
USAID Opportunity 2.0 calls for applicants for grants for out-of-school youth engagement
Pharmally scandal: When middlemen profit even during a pandemic
MOST READ
Rep. Eric Yap says his opponents using Pacquiao in move to probe Benguet projects
Robredo on vote buying: That might be taxpayer’s money so accept it, but vote based on conscience
Pharmally scandal: When middlemen profit even during a pandemic
Karen Davila’s son survives second full-blown seizure, now well
Don't miss out on the latest news and information.