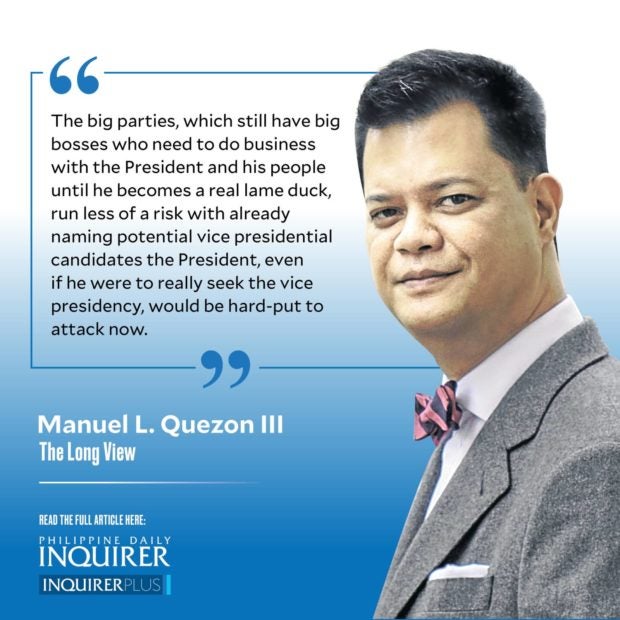 When Chavit Singson signed on to the Nationalist People’s Coalition (NPC), it seemed to me the way was being paved for that party to become Manny Pacquiao’s new political home. After all, the man who calls the shots, Ramon Ang, had said Pacman is a strong contender for the presidency. Absent the results of the coming fight, we haven’t seen any movement in that direction: but Pacquiao and friends were evicted from the PDP-Laban with the President’s active approval. As far as the NPC is concerned, what we have seen is Senate President Sotto, a party stalwart, paving the way for a coalition with Panfilo Lacson, himself a newly-minted high official in the newly-revived Partido Reporma of Renato de Villa.

It’s interesting that if Lacson was going to be convinced of the necessity of a party affiliation, that Sotto didn’t make a pitch to his pal to make that affiliation NPC. I can venture a reason why. That reason, however, requires a rather lengthy detour. First, let’s return to the PDP-Laban which is essentially run by the veterans of the Arroyo era, when the ruling party known as Lakas-NUCD was itself taken away from Fidel Ramos and after it served its purpose, kicked aside by Kampi. Former president Gloria Arroyo, after being removed as deputy speaker, mounted a hostile takeover of PDP-Laban and her people, in turn, have engineered the elimination of Pacquiao.

After evicting Pacman, the President has lately been training his sights on Manila Mayor Isko Moreno. But the President is not, as people think, a real risk-taker. He gets into fights he’s already won before publicly starting them. Mayor Moreno had become mayor with the National Unity Party (itself a spin-off from Kampi) and the big bucks of its boss, behind him: this backing was a core reason for Moreno being considered a presidential contender even ahead of completing a term in office. Now, of course, Moreno has left NUP, which sent the signal to everyone that the big backing isn’t there anymore, or that the support has been postponed, at least for anything higher than the mayoralty in 2022: so instead Moreno’s new affiliation is along the lines of Lacson’s: a souvenir, in his case, Aksyon, dusted off the shelf for reuse.

Which brings our long and winding road to the two-tandem solution that seems to be actively in consideration by the ruling coalition.

While PDP-Laban has declared its tandem will be Go-Duterte, there remains Hugpong, the regional bloc presided over by Mayor “Daughterte,” which the mainstream parties all claim will be, want to be, or are already in alliance with: after all, “Daughterte” is the front-runner in a race which hasn’t even started but which is all about positioning at this point. So long as candidacies aren’t formalized, this meaningless state of affairs will likely persist. Without avowed presidential candidates, two of the three parties with real money, NUP and NPC, can save their ammo until surveys make the viability, or lack of it, of the Dutertes, more obvious.

The idea of a Go-Duterte and, say, Duterte-Teodoro/Angara/Gatchalian (anyone, it seems, might do) would be similar to the Duterte-Cayetano and Santiago-Marcos maneuver, where the real tandem would actually be matched with expendable running mates. This divides the focus of opponents and prevents from a unified message about the real tandem (a Daughterte-Duterte tandem, for example). The big parties, which still have big bosses who need to do business with the President and his people until he becomes a real lame duck, run less of a risk with already naming potential vice presidential candidates the President, even if he were to really seek the vice presidency, would be hard-put to attack now (the most the President could manage, if you noticed, was to make a back-handed compliment to the Senate President during his last Sona; he couldn’t oust Sotto even if he tried, and probably doesn’t dare a frontal attack for reasons explained above).

The big-bucks parties, by not stating a firm commitment either way to any presidential candidate, can pretend to be in support of the yet-to-be-formalized candidacy of Daughterte without actually yet putting their money where their flexible mouths are. The closer we get to October, the clearer things will get; and meanwhile, they can informally support candidates belonging to other parties without being explicit about it. Which is why I think the Lacson-Sotto tandem, which is a viable one in and of itself, also provides the big players with cover for discreetly supporting them: the signal sent here is NPC is tacitly behind Lacson, and the cutting of ties with Moreno suggests it’s entirely possible NUP will back Lacson, too.