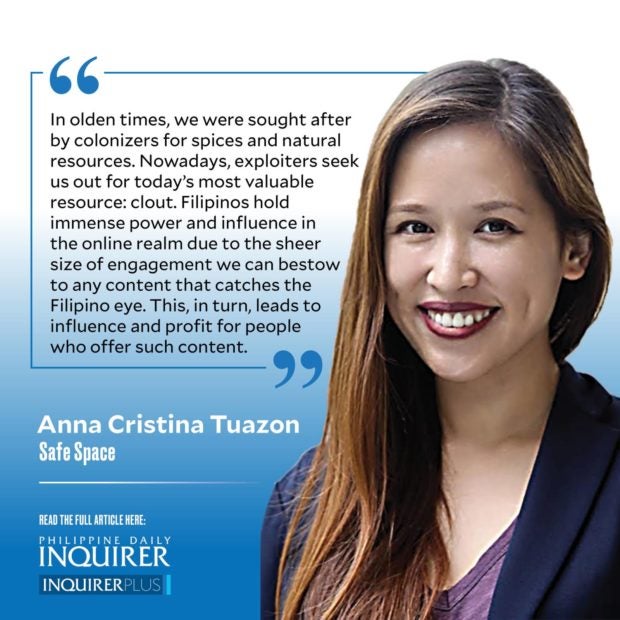 Over the last few days, Filipino netizens were outraged with the unfolding scandal surrounding content creator Nas Daily, also known as Nuseir Yassin, who was accused of exploiting Whang-Od, a revered mambabatok or traditional tattoo artist from the Butbut tribe of Buscalan, Kalinga.

Considered a “living vessel of a traditional practice,” the National Commission for Culture and the Arts conferred Whang-Od the Dangal ng Haraya Award for Intangible Cultural Heritage. Nas Daily started offering a paid online masterclass called the Whang-Od Academy, promising to have her teach “all her rituals, tools, and methods for making tattoos.” Whang-Od’s grandniece, Gracia Palicas, insisted that Whang-Od did not actually give her permission for such a class. As the issue went viral, a surreal round-robin of callouts and accusations among local vloggers and social media personalities ensued. In a case of allyship gone awry, they inadvertently took over the social space and co-opted the issue. Amidst the online spectacle, one voice was left out — that of Whang-Od herself.

This is what cultural exploitation in the digital age looks like: foreign content creators take pieces of other people’s culture, filter them through their own lens (with exaggerated reactions and pandering titles on the thumbnail) and sell these back to them in exchange for clicks and views.

In olden times, we were sought after by colonizers for spices and natural resources. Nowadays, exploiters seek us out for today’s most valuable resource: clout. Filipinos hold immense power and influence in the online realm due to the sheer size of engagement we can bestow to any content that catches the Filipino eye. This, in turn, leads to influence and profit for people who offer such content.

Make an episode about Filipino food or Filipino artists and you’ll be guaranteed millions of views. It is therefore tempting for creators to tailor content toward the Filipino audience, regardless of their sincerity toward our culture. It is this lack of authentic appreciation and instead a willful disregard for the welfare of those whose stories they are telling, for the sole purpose of gaining online engagement, that makes “Pinoy baiting” a case of cultural exploitation. The insistence of the thumbprint as proof of permission shows how lightly Nas Daily and his team treated the issue of consent. Consent is not solely contained in a signature or thumbprint — it is a collaborative process of helping the person understand the conditions and impact of what they are about to undertake, which necessarily includes the person being able to ask questions and express her concerns. In Whang-Od’s case, her intellectual property rights also intersect with the cultural rights of the community, requiring a much more rigorous consent process. The ignorance of the Nas Daily team around these rules belies a shallow interest in understanding a culture they have the audacity to teach to others for a fee.

Nas Daily’s refusal to wholly apologize or to take full responsibility for the violation of people’s cultural rights takes it a step further into the territory of Pinoy gaslighting. Gaslighting is a form of invalidation where we are made to doubt our own experience, particularly that of oppression and exploitation. Colonial mentality is the ancestor of Pinoy gaslighting. Whereas colonial mentality tricked us into thinking that foreign culture is superior to our own, Pinoy gaslighting made us believe that we are not being exploited but simply validated. Foreign validation becomes an honor worth seeking. The more blindly we accept foreign validation, the more vulnerable we become to those who exploit us for clout.

Filipinos should recognize their power and reward authentic and sincere efforts to understand and appreciate our culture over mere pandering and surface flattery. At the core of Filipinos’ vulnerability to being baited and gaslighted is a longstanding need to be respected and valued by others, something we have been deprived of through centuries of colonization. Instead of seeking foreign validation, we should learn how to validate ourselves and each other. If we genuinely love ourselves and our culture, we will hold much higher standards for those who deserve our clout.