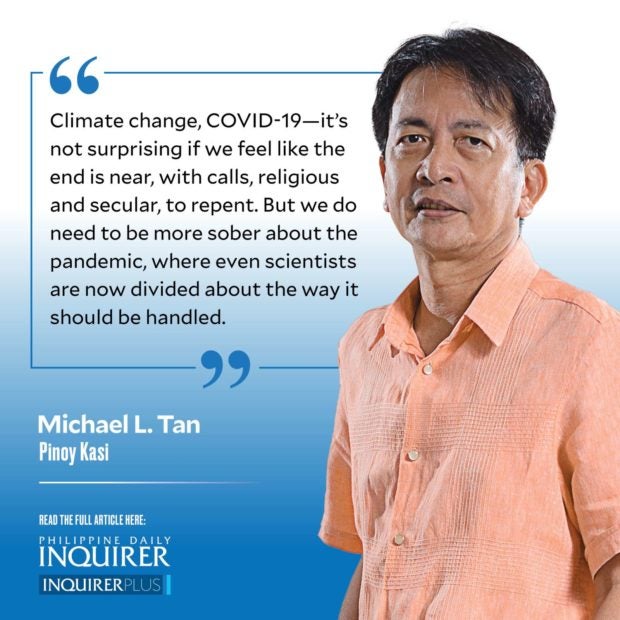 In a Pandesal Forum (named after an old bakery where the fora are held), presidential adviser on entrepreneurship Joey Concepcion, who together with the country’s largest business federations have endorsed the latest hard lockdown, was quoted as saying the restrictions would coincide anyway with a weak economic period with “nonstop rainy days” and the “ancient Chinese belief of the ‘Ghost Month’ where business deals are avoided.”

That came from Secretary Concepcion and not from the Filipino-Chinese chambers of commerce, showing how this hungry ghost belief has become part of Philippine culture.

The belief is that every seventh lunar month (which started this year on Aug. 8 and extends to Sept. 6), ghosts that are in hell — which is not eternal in the Chinese cosmology—are allowed to roam the world. Punished for their greed when they were humans, the ghosts are eternally hungry because whatever they eat goes straight from the mouth to the body’s posterior exit. In their frustration and rage, the ghosts wreak havoc, even as humans try to placate them with food offerings and prayers.

FEATURED STORIES
OPINION
Why Leni is the candidate who can
OPINION
‘Fellow columnists and other fools’
OPINION
A win for children, parents

It’s all in the mind, of the beholder. If you believe in the hungry ghosts then every kind of adverse event can be blamed on these miserable creatures. Sunday I happened to open an online issue of the British newspaper The Guardian and it had a front-page photo of a woman in despair, a raging wildfire in the background. The photograph was used together with a headline about a new report from the Intergovernmental Panel on Climate Change, with a headline: “Global health crisis: inevitable, unprecedented and irreversible.”

Climate change, COVID-19 — it’s not surprising if we feel like the end is near, with calls, religious and secular, to repent.

But we do need to be more sober about the pandemic, where even scientists are now divided about the way it should be handled. In China, three leading and respected epidemiologists called on the government to learn to live with the pandemic, aiming for intensive immunization to reach herd immunity and enforcing the use of masks and physical distancing, but with a tacit acceptance that zero levels will probably not be possible, even with the strictest of lockdowns and travel restrictions.

I suggest we listen as well to the ethicists. I particularly appreciated an article from the Frontiers of Public Health by Andrea Lavazza and Mirko Farina, observing that governments tend to privilege certain medical professions over others, citing epidemiologists and statisticians, among others. Lavazza and Farina suggest that more authoritarian governments prefer these professions because their pronouncements give a sense of urgency, and whatever government does, no matter how little or effective, emerges as doing something. After all, they observe, politics thrives on “emotions and visceral responses.”

Lavazza and Farina make it clear that the pandemic is serious but they worry that alarmist views with a focus on restrictive policies, obscure the need to address moral issues such as people’s livelihood. They note that science should provide findings that can be used “to inform answers to moral questions” and this can be done using science to evaluate the consequences of procedures and decisions.

I thought of Social Weather Stations’ Dr. Mahar Mangahas questioning the need for curfews during the last National Academy of Science and Technology annual scientific meeting. Without a curfew, he argued, we open possibilities for more jobs through a night shift.

We need to be more scientific and evaluate how effective the lockdown’s many rules are for fighting the virus, from the use of face shields to the continuing sequestration of minors and elders and, I just read, a ban on outdoor exercise for everyone.

I visited a friend in an urban poor community the day before the new lockdown and my son whispered to me: “He looks like a hungry ghost.” The poor man was just settling into a new job when the lockdown threw him out of work again. Two of his children ran out to greet me but the mother called them back, saying the last thing she needed was a fine of P1,000 for each child caught out in the streets.