Your pain is misplaced | Inquirer Opinion

Your pain is misplaced 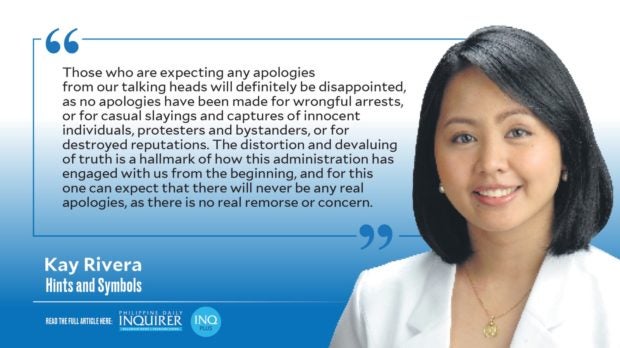 The swelling of national pride over Hidilyn Diaz’s Olympic success has led to some comedic moments in the aftermath. After Diaz gave the country its first gold medal, those who criticized her for appealing for more support and sponsorship for local athletes have been seen singing her praises; trolls who ganged up on her via social media, in typical display of a lack of self-awareness, now send emotional congratulations where once there were ad hominems and cyberbullying.

The most alarming and frustrating thing of all is the gaslighting. Diaz herself has spoken about the trial of being implicated in a so-called destabilization plot in 2019. The now infamous “matrix,” inexplicably presented on white cartolina by then presidential spokesperson Salvador Panelo, supposedly showed names and organizations linked to a plot to oust President Duterte. At first Diaz thought her name being implicated was a funny joke, but the gravity of the situation soon became clear: At the time, she expressed in a video statement that she was fearing for her security and that of her family, while wholly denying any involvement with political plots. Some commentaries at the time mused that her involvement in the matrix was a reaction to her appeals for funding, which were taken as criticisms against the Duterte administration.

Whatever the reason and whatever the source of Panelo’s intelligence, Hidilyn Diaz experienced what it was to be Red-tagged, to be linked nonsensically to subversive activities and to have her credibility, livelihood and safety threatened as a result. Fast forward to 2021: After her Olympic win, the President himself addressed Diaz in a way that must have inspired mixed emotions. Along with his congratulations, Mr. Duterte encouraged her to forget unspecified unpleasant events (“mga hindi magandang nangyari”) and to let bygones be bygones. Panelo has gone a step further and told her, in a classic gaslighting move, that her pain from the accusations was “misplaced” and told media that they must have misunderstood the inclusion of Diaz’s name in the matrix, despite there being clear evidence to the contrary.

While she now enjoys accolades and even the congratulations of the same individuals who linked her to the ouster plot, the fear that comes from being tagged is not a misplaced one. The sheer insanity in shrugging off the fears of one who became a target of government surveillance and cyberbullying, however temporarily, is a trademark of those who stand on the top of Mr. Duterte’s pyramid. Those at the bottom, ordinary citizens like 2019’s Hidilyn Diaz included, need only be name-dropped to be targeted. Some of those Red-tagged have not enjoyed such satisfying denouements as Diaz.

Who in their right minds would not be afraid for themselves and their families? Five years since our first worries about extrajudicial killings, the administration’s body count continues to rise. Mere hours before the President’s last Sona, two activists were slain by police in Albay for spray-painting an anti-Duterte slogan, covered up as usual by variations of the “nanlaban” narrative. This column has spoken about ordinary citizens being targeted and even arrested for anti-administration social media posts (“The chief difference,” 6/28/21), and about the government’s practice of linking just about anyone, including community pantry leaders and artists, to “red” activity. It just goes to show how easily and unconcernedly this president’s government resorts to fear tactics to enforce silence and curb legitimate criticism, and how little it cares for the fears of ordinary folk whose reputations and security are threatened.

Diaz has said on a news spot recently that she has forgiven the administration for her baseless inclusion in the “Oust Duterte” matrix, interrupting herself when she seemed about to say that forgiveness is different from something else — perhaps that forgiving is different from forgetting, but who knows? Those who are expecting any apologies from our talking heads will definitely be disappointed, as no apologies have been made for wrongful arrests, or for casual slayings and captures of innocent individuals, protesters and bystanders, or for destroyed reputations. The distortion and devaluing of truth is a hallmark of how this administration has engaged with us from the beginning, and for this one can expect that there will never be any real apologies, as there is no real remorse or concern.