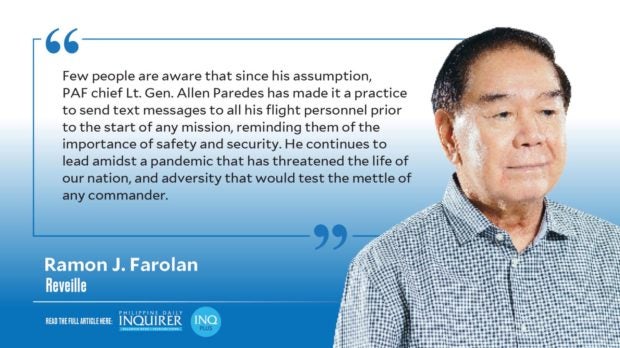 For many years even prior to the grant of independence in July 1946, the Philippine Army Air Corps (PAAC) and its successor, the Philippine Air Force (PAF), celebrated Air Force Day on the second of May each year. It was on this day in 1936 that Lt. William Lee, a US Army Air Corps pilot detailed with the PAAC, test flew a Stearman bi-plane No. 36-2, over Zablan Field in what is now Quezon City. The airstrip near Camp Aguinaldo was named after Lt. Porfirio Zablan, one of the first batch of Filipino Constabulary officers selected for flight training. Zablan would perish in a snowstorm just a few days before completing an advanced flying course in San Antonio, Texas. What made the flight particularly significant was the fact that the Stearman flown was the first to be purchased by the Commonwealth government and assembled here for use by the PAAC. Lee who has been dubbed by many old-timers as the “Father of the PAF” eventually became commander of the US Thirteenth Air Force based at Clark Air Base, Pampanga.

In 1986, after the Edsa revolution, the PAF marked its golden anniversary (1936–1986) with the Blue Diamonds acrobatic team returning to the skies after some years of absence. President Cory Aquino was the guest of honor while Gen. Fidel Ramos was the new AFP chief of staff. Air Force Day in 1986 was extra special not only because it marked the golden jubilee of the organization but also because the Air Force had played a major role in the uprising that restored democracy to the country. The defection of then Col. Antonio Sotelo and others with helicopters from the 15th Strike Wing helped turn the tide in favor of the Enrile-Ramos forces holed up at Camp Crame during the critical days of February 1986.

Three years later, in 1989, President Cory Aquino signed Presidential Proclamation No. 397, moving Air Force Day from May 2 to July 1. Two reasons were cited for effecting the change: First, the PAF wanted to conform with the general practice of celebrating the attainment of major service command status. By virtue of Executive Order No. 94 which took effect on July 1, 1947, the PAAC was redesignated as the PAF and raised to major service command level. Second, nationalist sentiments called for the Air Force to “disengage itself from its colonial moorings.” The test flight of an American pilot during the Commonwealth period was hardly the proper occasion for commemorating Philippine Air Force day.

Because of this change in anniversary dates, the PAF for the second time, celebrated its golden anniversary in July 1997. The commanding general PAF (CG, PAF), Lt. Gen. William Hotchkiss III, along with top brass of the Air Force, smartly-attired in mess jacket uniforms, gathered at the Philippine Plaza ballroom to mark the occasion, paying tribute to their former commanders. As part of the activities, General Hotchkiss launched a coffee table book “Flight to the Future.”

Last Friday the Philippine Air Force with Defense Secretary Delfin Lorenzana as guest of honor, marked its 74th Founding Anniversary. Originally scheduled for July 1, the event had to be postponed in view of several tragedies that befell the organization. Part of the program was a special “Moment of Remembrance” honoring those who fell in line of duty. Also included was a video of Hidilyn Diaz, our gold medalist at the Tokyo Olympics, who is a member of the PAF with the rank of staff sergeant.

In his touching and heartfelt remarks, Lt. Gen. Allen Paredes, the 37th CG, PAF, noted that “we have toned down this year’s commemoration of our anniversary. But we did not tone down our tribute to our airmen and their families, our medical frontliners and our stakeholders who together with us, remain undeterred in facing the challenges of this pandemic.” Addressing his “beloved airmen” as “my children,” Paredes thanked them for their prayers and support during a period of difficulties. “I shall continue to devote the remainder of my time in laying the foundations of a safety system that can help prevent a repetition of past events.” Few people are aware that since his assumption, General Paredes has made it a practice to send text messages to all his flight personnel prior to the start of any mission, reminding them of the importance of safety and security. He continues to lead amidst a pandemic that has threatened the life of our nation, and adversity that would test the mettle of any commander.