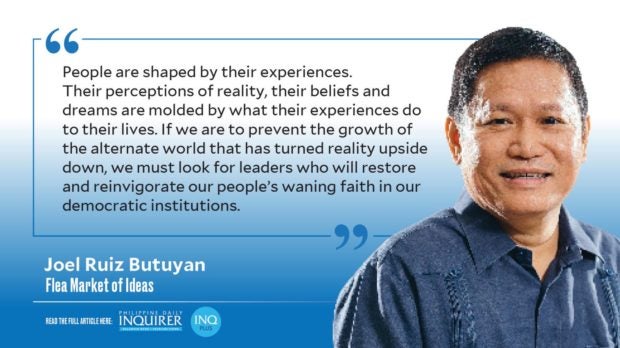 One of the many consequences of President Duterte’s reign as our nation’s top leader is that it has exposed the existence of two different worlds in our midst. We’ve felt parts of these two different realities in previous administrations because they’ve been bubbling in and out of our consciousness for so many years. But it’s only now that we see the clarity of their contours and full features, because these worlds have been made to collide with each other under the current government. The Duterte administration has fomented a war between these two worlds in the last five years.

How else do we explain the fact that we, as a people of one country, experience the same events but have two completely opposite perceptions of these similar occurrences, as if we’re experiencing totally different realities? This can only be explained by the virtual existence of two different worlds in our midst.

Take for example the thousands of deaths that have been happening in the ranks of alleged drug suspects and political activists. The mounting loss of lives has horrified one segment of our society, but another sector applauds or consents in silence. Take as another example the crude language and disrespectful behavior of some of our current leaders, as exemplified by no less than our President. One sector of our society is disgusted and scandalized, but another sector perceives such behavior as evidence of “authenticity” and proof of a grounded leader. There’s also the matter of one segment of our country that craves for an authoritarian ruler, while another sector yearns for a democratic leader. These are a few examples of the yawning differences between our two worlds.

Our country has been moving in two opposite directions all these years, and the split has led to the formation of two different virtual worlds with their poles-apart versions of reality. There are numerous causes that have collectively contributed to the birth of these two opposing worlds.

One easily discernible cause is the bitter divide created by the huge economic disparity between the haves and the have-nots in our society. This economic disparity has generated different needs between the rich and the poor, and these needs have become increasingly contrasting and conflicting. The privileged class has monopolized growth opportunities, while those who belong to the underprivileged have been deprived of any means of escape from the quicksand of poverty.

Another clearly visible cause is our worsening illiteracy which is, in turn, spawned by the deteriorating quality of our educational system. The rise of trolls and their spread of fake news feed on this societal malignancy.

Poverty and illiteracy are not the only reasons for the emergence of our two warring worlds, however. For how do we explain the fact that President Duterte has a considerable number of supporters even among the rich and educated? How do we explain the fact that Mr. Duterte continues to enjoy extensive support among the poor, in whose ranks many of the extrajudicial killings are happening and whose economic lot has worsened during his term?

One very impactful cause of the dual realities in our midst is the kind of leaders who have caused extreme and longstanding disappointment to many of our countrymen. These leaders have perverted and destroyed our people’s view and experiences with our version of democracy, our brand of economic development, and all the other ideals upon which our people have looked up to for deliverance and salvation. The resulting disillusionment has caused our people to associate democracy with unresponsiveness, intellect with arrogance, and civility with insensitivity.

People are shaped by their experiences. Their perceptions of reality, their beliefs and dreams are molded by what their experiences do to their lives. If we are to prevent the growth of the alternate world that has turned reality upside down, we must look for leaders who will restore and reinvigorate our people’s waning faith in our democratic institutions.