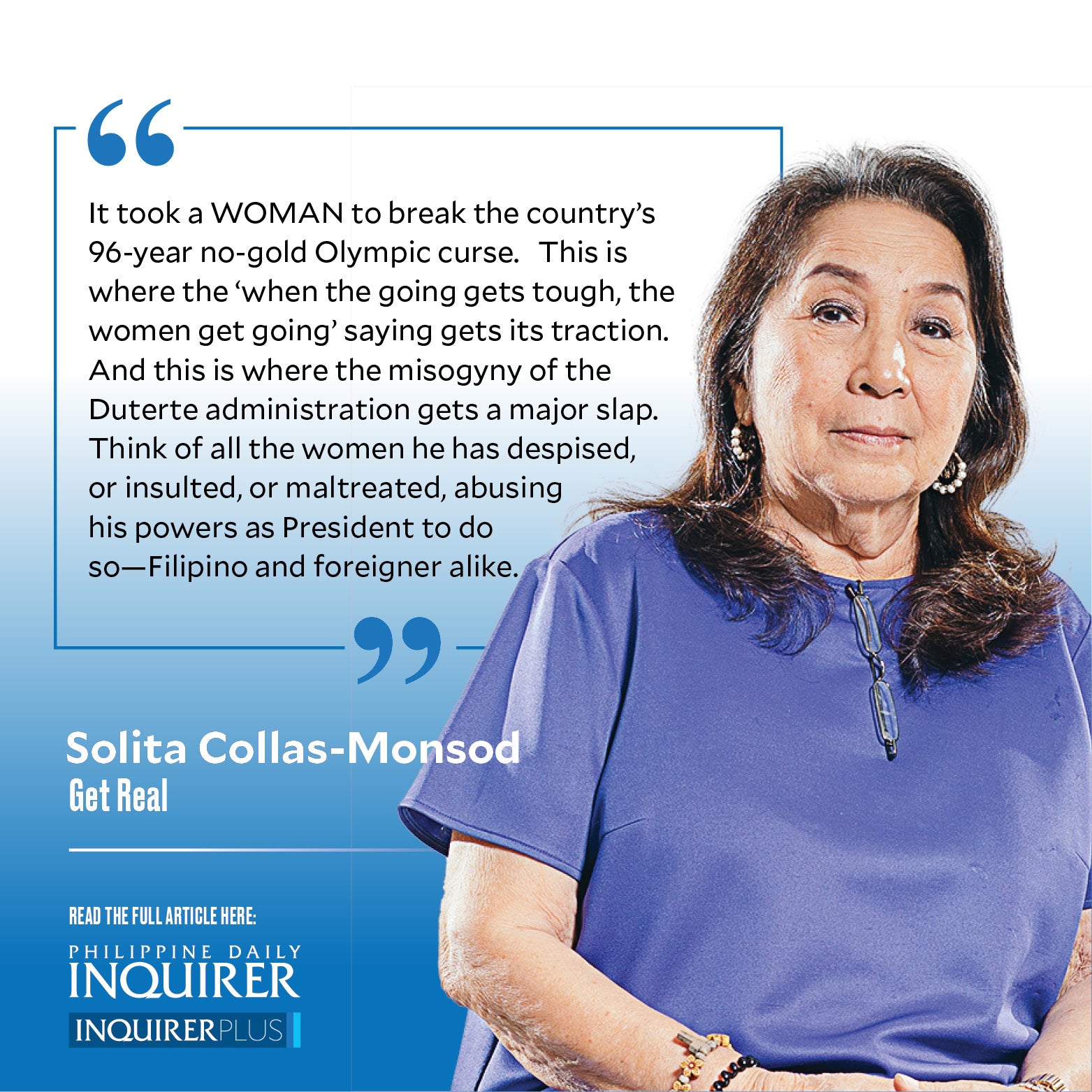 The most significant event that happened this week, we can all agree, is Hidilyn Diaz’ triumph at the Tokyo Olympics, bringing the Philippines its first gold medal. This shrimp of a lady – all 4 foot, 11 inches of her — lifted much more than twice her weight (54.90 kg, lifting 127 kg) to win.

Seven things we will never forget about this victory, and which teach us invaluable lessons:

1. It took a WOMAN to break the country’s 96-year no-gold Olympic curse. This is where the “when the going gets tough, the women get going” saying gets its traction. And this is where the misogyny of the Duterte administration gets a major slap. Think of all the women he has despised, or insulted, or maltreated, abusing his powers as President to do so — Filipino and foreigner alike.

2. Hidilyn’s first reaction after her victory was to praise and thank God and her intercessor, the Our Lady of the Miraculous Medal (Our Lady of Graces, Immaculate Conception) with her “talagang grabe si God”. Then, after our National Anthem was played, she pointed upward to God and clutched the Miraculous Medal that encircled her neck. She had her values right. Another saying comes to mind: “Work as if everything depends on you and pray as if everything depends on God. ”

3. The Philippine victory was over China, which makes it all the sweeter. Her opponent was Chinese, and she held the world record for weightlifting in that division. Hidilyn neither knew nor cared, and maybe without even realizing it — because she was concentrating on achieving her ambition — broke that world record. This victory is the only other victory that we have won against China, the first being when we won in the Permanent Court of Arbitration at the Hague five years ago, but which President Duterte has pooh-poohed in word and deed.

4. Strikingly, one of Hidilyn’s personal trainers is a Chinese national. And he apparently told her that the Chinese team was unhappy that he did not tell them how strong a contender she was. So it seems that even in the Olympics, China wants its people to cheat for them — maybe cheat is too strong a word. China wants its people to do all they can to ensure a Chinese victory — including unethical behavior.

6. There is a sixth newsworthy item which occurred after her victory: She wore a shirt emblazoned with “West Philippine Sea”. When asked about it, she said she didn’t know much about international issues, but she knew one thing: “Kung atin, atin.” What is ours is ours. Simple.

7. And the last unforgettable thing about her victory: She does not have a vindictive bone in her body. Remember her being accused by Malacanang of being part of a “matrix” that wanted the downfall of President Duterte? Maybe that’s why the government didn’t support her as much (the Palace still hasn’t apologized). When this issue was brought up, she said she has forgiven the officials and bashers behind it.

So are there lessons from the foregoing that we can apply going forward? Here are some obvious ones, Reader:

The going, we can all agree, has been very tough. This suggests, from the above, that we need a woman to lead us out of this mess.

A woman who has the right priorities, and who, from our past experience with her, has faithfully lived up to them.

A woman who is not afraid of China, or will not let fear interfere with what she is committed to do for her people, or what is required by our Constitution.

A woman who will show magnanimity, instead of spite, in her victory.

And when we have found that woman, the private sector, civil society, and all other stakeholders must not watch and wait while she struggles forward. She needs the help now.

Still not convinced that the job of leading us out of this mess needs a woman’s touch, Reader? Fine. Let’s borrow from the Human Resource profession, which uses this rule of thumb as a tool in deciding on employee hire: “The best predictor of future behavior is past behavior”. Applying this rule, you will still get the same results.