Violence in the forest 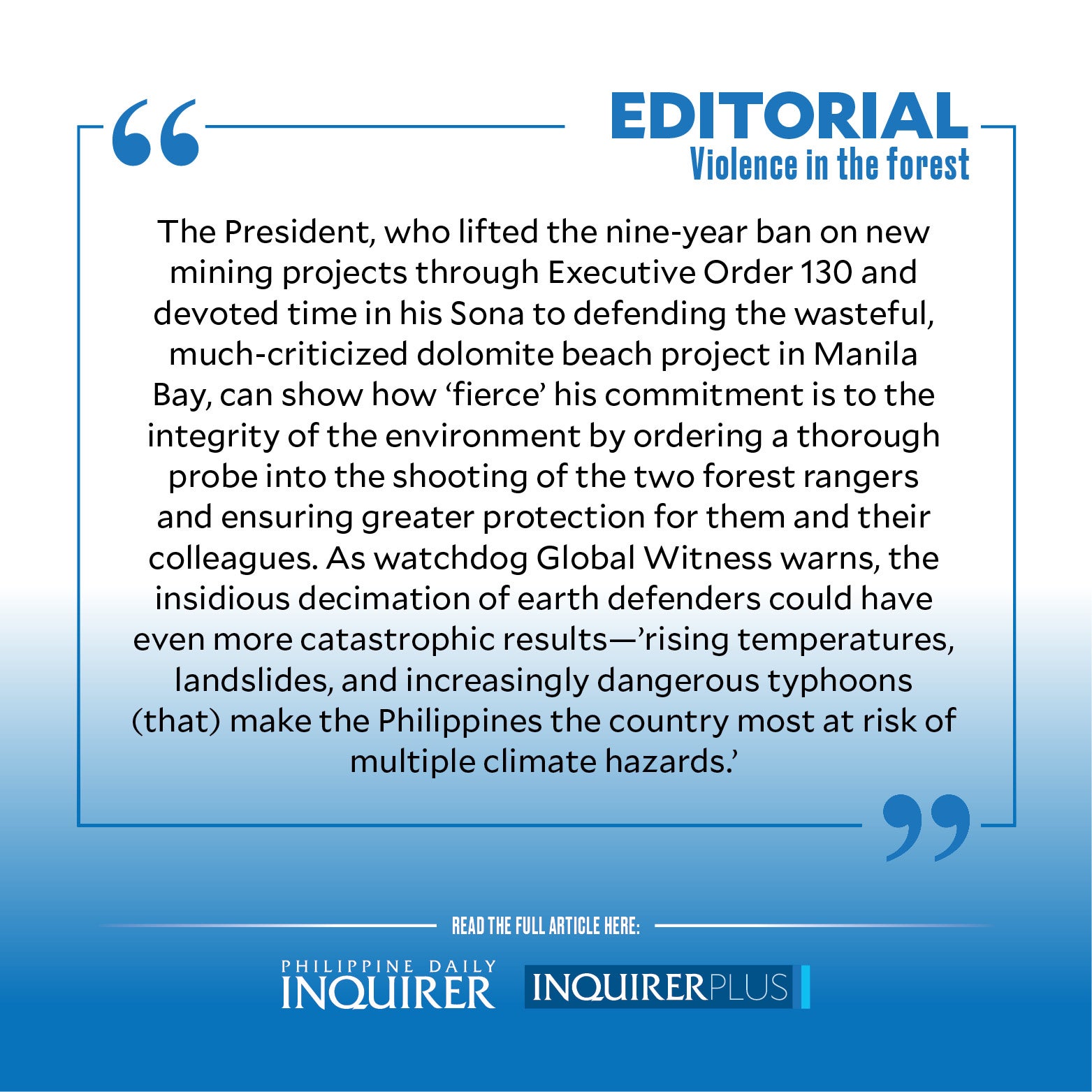 In his final State of the Nation Address (Sona) on Monday, President Duterte exhorted “our next leaders and our future generations [to]… fight for the integrity of our environment in a manner fiercer” than his administration has done.

Apparently, that regard for our natural resources and environment wasn’t fierce enough to prevent the shooting last Saturday of two forest rangers protecting the Masungi Georeserve in Baras town, Rizal province. Melvin Akmad and Kukan Maas were shot in the head and neck, respectively, on the night of July 24 by a still unknown assailant at a reforestation area very near a Special Action Force (SAF) station. They are now recovering in a hospital.

Condemning the “heinous act of violence and attempted murder against forest defenders,” the Georeserve called on the police to protect them, noting that this was not the first time its rangers had encountered harassment.

Proposed in 1993 as a Strict Nature Reserve and Wildlife Sanctuary under the National Integrated Protected Area System Act of 1992, the Georeserve has been mandated to reforest almost 3,000 hectares of heavily degraded land in the reservation located in the Upper Marikina River Basin Protected Landscape. An administrative order by the Department of Environment and Natural Resources (DENR) also declared the Georeserve off-limits to quarrying, mining, and land speculators who acquire undeveloped land for commercial exploitation. Presidential Proclamation No. 296 barred loggers from the area as well.

But while the Masungi Georeserve Foundation has since planted 47,000 native trees with the help of volunteers and visitors, years of deforestation, quarrying, and land degradation have denuded the area, affecting the drinking water supply of its population and unleashing floods in the Metro by way of Marikina Valley every time a strong typhoon blows in.

Despite its legal mandate, the Georeserve has had to contend with quarrying and logging companies that have barricaded the area with barbed wire, preventing Georeserve workers and forest rangers from doing their job. Some companies have put up guard huts using illegally cut logs from the sanctuary and hired roving guards with long arms to fence out intruders, even using “errant elements of the SAF and the Army to harass our project teams,” according to Masungi Georeserve Foundation trustee Billie Dumaliang. “Professional squatting” has become a challenge as well, with powerful individuals, including retired enforcement officers, appropriating chunks of forest land for themselves.

With the country’s current ratio of one park ranger for every 4,000 hectares of land nationwide, it has been a losing—and sometimes fatal—battle for environmentalists. The Philippines has earned the dubious title of being the deadliest place for earth warriors in Asia, and the second deadliest, next only to Colombia, in the world. In a report, the watchdog Global Witness (GW) said 43 defenders were killed in the country in 2019, mostly in the resource-rich islands of Mindanao and Negros. Since 2016, scores of indigenous leaders, farmers, and state workers charged with protecting the environment have been the victims of incidents allegedly involving armed forces or paramilitary groups.

In its submission to the United Nations Human Rights Council, the group Kalikasan People’s Network for the Environment noted that “(a)t least 19,498 environmental defenders were subjected to a wide range of human rights abuses under the Duterte administration.” These include red-tagging incidents, outright cases of illegal arrest, and displacement from areas with military operations.

The abuses extend to the dismal working conditions of these environmental defenders who, despite the risks they face, receive less than minimum wage, have no labor contracts, no health or social service benefits, and often have to put up with delayed salaries.

What has the government done about this? The Georeserve has an ongoing petition to President Duterte to fortify protection of the Upper Marikina Watershed and the entire geopark from quarrying. But it’s the government’s silence and/or inaction on instances of violence against environmental protectors that speaks volumes.

The President, who lifted the nine-year ban on new mining projects through Executive Order No. 130 and devoted time in his Sona to defending the wasteful, much-criticized dolomite beach project in Manila Bay, can show how “fierce” his commitment is to the integrity of the environment by ordering a thorough probe into the shooting of the two forest rangers and ensuring greater protection for them and their colleagues. As GW warns, the insidious decimation of earth defenders could have even more catastrophic results—“rising temperatures, landslides, and increasingly dangerous typhoons (that) make the Philippines the country most at risk of multiple climate hazards.”